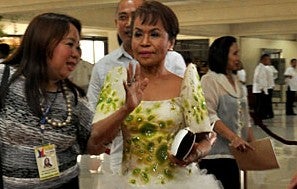 MANILA, Philippines — Dionisia “Mommy D” Pacquiao caused such a huge commotion on the red carpet at the House of Representatives before President Aquino’s annual speech that journalists were herded out after she left.

After Manny left, reporters already trained their attention to the outfits of fashion favorite, Leyte Rep. Lucy Torres-Gomez, and neophyte Sen. Grace Poe when Mommy D arrived in an immaculate white terno with a tulle skirt and green sequin spots scattered on the bodice.

Her hair was pulled back in a bun but her bangs made her appear younger.  She wore simple pearl studs.

The new fashion darling said she could not recall who made her gown, only recalling that “someone from Manila (basta, taga-Maynila)” made it for her.

As Mrs. Pacquiao filled in a group of television reporters about her threads, some kibitzers broke protocol by skipping the velvet rope that separated mortals from VIPs and suddenly took selfies with her.

Members of the House sergeant-at-arms also failed to contain civilians who turned unruly at the sight of Mommy D.

After she left, security told reporters that the red carpet coverage was over even if some well-dressed guests continued to arrive at the South Wing of the Batasang Pambansa where the annual State of the Nation Address (SONA) would be delivered.

The House red carpet event happens every year right before the President delivers the SONA.

It is the country’s fashion equivalent of the Oscars in Hollywood and Fashion Week held in major sartorial capitals all over the world.

Poe, on the other hand, wore an off-white creation of upcoming designer Roulette Esmilla that was also heavy in intricate embroidery.

Pangasinan Rep. Rosemarie “Baby” Arenas was striking in a red Cabral creation made of Thai silk.

Aklan Rep. Teodorico Haresco’s wife Yulia was a vision in an eggplant gown with embroidery cutout by Rajo Laurel.

Jenny Montejo, wife of An Waray party-list Rep. Neil Benedict Montejo, wore a Rajo serpentine terno made of nude tulle embellished with lilac embroidery that highlighted her parure of diamond earrings and necklace.

Sen. Cynthia Villar wore an orange terno embroidered with vines and cherry blossoms on the bodice that was designed by her cousin Noli Hans.

Her colleague, former Akbayan Rep. Risa Hontiveros went dramatic in a white modern jusi barong over a black sheath gown also by Azubuche. This she partnered with champagne pearl earrings and a gold minaudiere.

Cebu Rep. Gwendolyn Garcia wore an old rose, off-shoulder number by Philip Rodriguez that she paired with a brass and mother-of-pearl minaudiere.