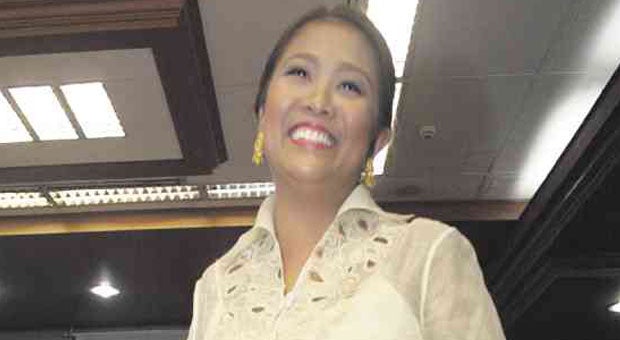 MANILA, Philippines — Senator Nancy Binay said she has apologized to designer Randy Ortiz for her fashion faux pas and the bashing that they received because of her outfit during the opening of the Senate session on Monday morning.

In a phone patch interview with reporters on Tuesday, Binay said she forgot her designer’s instruction how to wear her outfit –a Barong Tagalog with a bubble skirt– that it looked like a hot air balloon.

(I have done Randy wrong. I forgot to tie my skirt so it looked like a bubble skirt.)

(The skirt should have been shorter in the front than the back. When I noticed it, I was already changing gowns. I said, ‘why does this have a tie? Did I forget to tie it?)
“Kaya nga nahihiya ako kay Randy kasi parang nadamay pa sya sa bashing…Ako kasi sanay na dun e, eh siya hindi sanay sa ganun so parang nakakaguilty,” she added.

(That’s why I am embarrassed for Randy because he has been dragged with the bashing. I am already used to that. But he isn’t, that’s why I feel guilty.)

Binay said she immediately called Ortiz over the phone and apologized for it.

(I called Randy and apologized to him. I told him, ‘it’s a pity you are being bashed by my critics.’ He told me, ‘you know it’s ok.’ It’s like at this point of his career, he doesn’t care anymore.)

In fact, the senator said she has not paid yet the dress as she was still asking her designer if she could pay in installments.

Despite criticisms, Binay said she would still keep Ortiz as her designer and they would continue to experiment on the next outfit that she would wear next time.

In a separate interview, Binay said she was already immune that she was no longer affected by the bashing.

Sona 2014: Grace Poe is netizens’ top choice for most fashionable