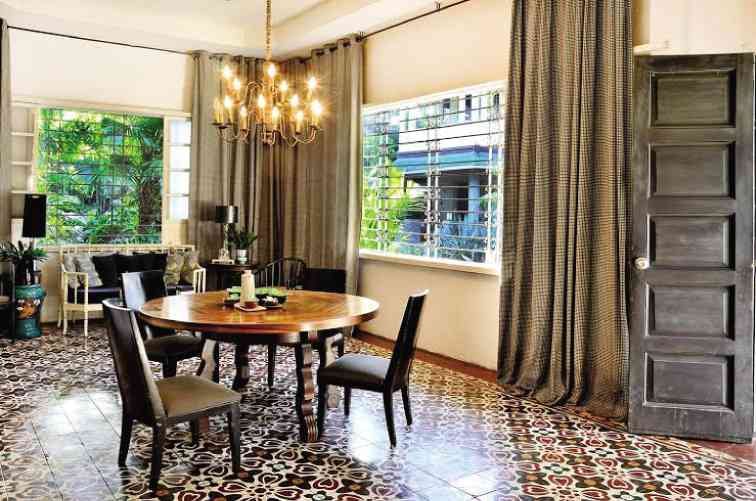 MADMIX In his atelier, Lloren added a hardwood top on a vintage table which is surrounded byamix of contemporary chairs.

Once a grim neighborhood, 2680 F.B. Harrison, the Pasay compound near an abandoned badminton court, has become an artistic hotbed ever since it was occupied by creative souls.

This compound dates to the Post-war era, when the world economy was on the rebound. Property owners built big houses in Pasay because of its accessibility to the clean air from Manila Bay. These two-story buildings had interiors with high ceilings, large windows and a balcony on the second floor, and the floors were laden with Machuca tiles. Before the introduction of air-conditioning, these houses were designed to facilitate air flow.

Among the 20 houses, some will be turned into a boutique hotel, an example of adaptive reuse of a heritage building. Meanwhile it has been home to Avellana Art Gallery, the showroom of furniture designer Eric Paras and the atelier of couturier Jesus “Jojie” Lloren.

Clients of Jojie Lloren urged him not to move out of his atelier in San Miguel Village, Makati. As his contract was due to expire, he visited the Pasay compound and liked what he saw.

Well-meaning friends warned him that clients would not brave the Pasay traffic. They were wrong.

“I got more clients. They find it easier to come here,” says Lloren, whose home in Pateros is only a 30-minute drive away.

Braving the pollution and the gritty stretch of urban decay on the way to his atelier, his visitors would notice the sudden change in the atmosphere once inside the compound.

Lloren describes the process of decorating his workshop as “bayanihan” in spirit.

Friends pitched in to beautify the place: a louver screen from Albert Avellana, a bird cage from designer James Reyes, a chandelier from lighting designer Ricky David, and furniture pieces from Eric Paras’ A11.

Lloren also picked up period pieces from thrift shops along Evangelista Street in Makati. To an old round table he acquired, Paras added a marble top to adjust it to the proportion of the spacious living room.

“I’m neither a minimalist nor a maximalist. I wanted the place to look a bit French,” says Lloren, referring to the chandeliers and artworks.

However, his display of religious art is so Filipino. Antique Marian medallions that spell out his name are displayed alongside modern Marian prints by Virgilio Aviado.

When he needs inspiration, he walks to Avellana’s gallery or borrows books on design from Paras’ collection. He recalled that for a Fashion Watch show, he read Paras’ Art Deco books. Upon presenting the first samples, Paras said they looked more Art Nouveau and suggested streamlining the ornamentation.

“Friends like these help me explore possibilities,” says Lloren.