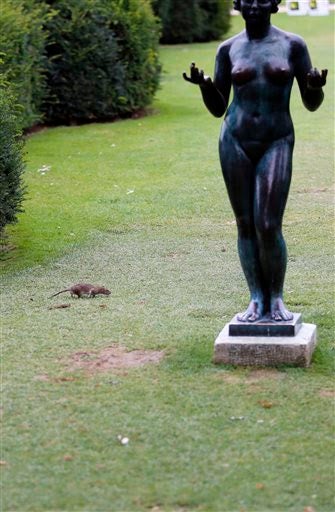 A rat runs next to a Maillol Statue in The Tuileries gardens of the Louvre Museum in Paris, France, Tuesday, July 29, 2014. Rats have been on the rampage on the grass in broad daylight, defying death threats from sanitation workers. AP

PARIS — Rats are on the rampage in the elegant garden of the Louvre Museum, so bold they romp on the grass in broad daylight, defying death threats from sanitation workers and scaring tourists.

The hot weather in Paris has brought many picnicking visitors to the garden, whose garbage is a feast for the rats. And they’re getting help from animal lovers who dig up poison and feed them water.

The vermin are finding a lifeline from “people who don’t want us to kill animals,” said Jean-Claude Ndzana Ekani, a museum employee who was working Tuesday with technicians from an extermination company,

The lush area which extends into the Tuileries Gardens gives a rat plenty of places to hide, but still the critters scamper about openly, unfazed by people strolling about.

The Louvre, which owns the garden, has been trying to combat the rat problem for months but clearly hasn’t succeeded. In May, sanitation officials and exterminators decided to embark on an all-out offensive: “A decision was made to do a shock operation,” Ndzana Ekani said. Workers, acting methodically, were seen Tuesday pouring poison down the rat holes.

“I see about 10 or 15 (rats) every day,” said Traore Massamba, 25, a maintenance worker. “There are a lot of people who come here to picnic and they leave their leftovers, so I think that attracts them.”

Dutch tourist Evelyne Delemarre, 31, let out a scream after seeing a rat scamper by.

“I normally don’t see any rats,” she said. “They’re not really clean animals.”

No doubt Remy would be offended by such remarks.

But he might appreciate the goings on at the Louvre Garden. He was, after all, an escape artist of sorts — and in the end outdid his enemies.

Rodents have long made Paris their home. In 2000, mice were caught picnicking on the delicate pastries in the window of the luxury shop Fauchon. To the west of the capital, moles are an ever-present problem at the Palace of Versailles — which has its own mole-catcher.

Tourists may have to get used to an occasional rat scampering about the garden.

“We’re doing everything we can. This is a recurring problem in all public gardens,” Ndzana Ekani said. Given the size of the Louvre garden “we can’t eradicate them.”