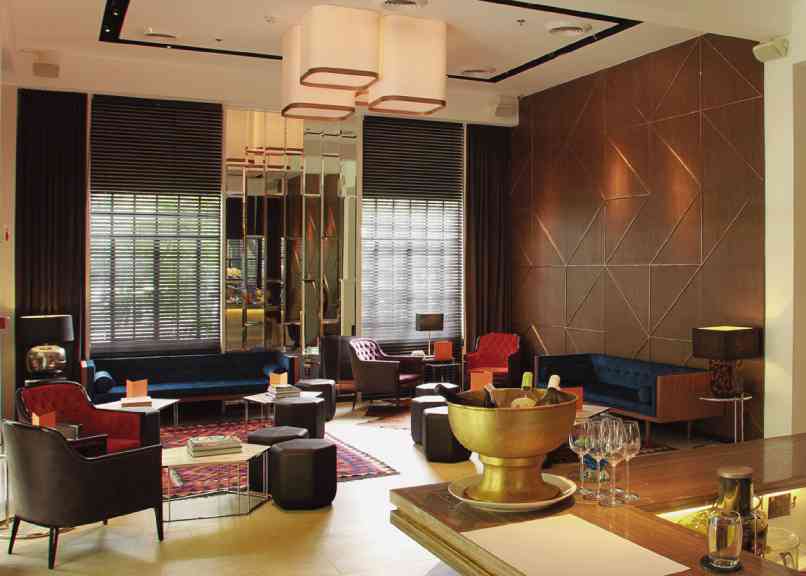 ART Deco elements such as the hexagonmarble and steel tables and leatherette stools, kilim rugs and round furniture adorn the lounge.

It was the proverbial love at first sight for Scottish restaurateur Colin Mackay when he stepped into the Nielson Tower for his birthday in 2002.

Imbued with history and Art Deco elements, this Makati landmark was the country’s first airport, built in 1937 by British businessman Laurie Nielson. Over time, it has had different functions, the last of which was as the Filipinas Heritage Library, the repository of Ayala Corporation’s historical collection.

Mackay went to Ayala Land and proposed to use the building as a restaurant. It took 11 years after the library had moved to the Ayala Museum before Ayala called back and asked for his concept. With the help of designers Damien “Coco” Anne and his wife  Ma. Asuncion “Baby” Imperial-Anne, Mackay delivered a slick presentation. The Nielson Tower now hosts his new restaurant—the fourth is his portfolio—called Blackbird.

Blackbird is not just an exceptional conservation and a sophisticated adaptive reuse of a heritage building; it also offers diners a contemporary international dining experience. Mackay is passionate about the concept, design and culinary repertoire, and credits the Anne couple for visually interpreting his vision.

“We wanted to create an interior that would show off the volumes of the Art Deco building. The space highlights the substance of the food, which is linked to international travel,” says

Mackay named it Blackbird after the world’s fastest plane used during the Cold War. The name also refers to the building’s aviation history and design, which resembles an airplane. The rounded corners and symmetry make the building look sleek and aerodynamic, while the layout also resembles a fuselage with a central axis and wing spaces on both sides.

Since the building sits on the triad of Makati Avenue, Paseo de Roxas and Ayala Avenue, the triangle becomes a recurring motif on the brass relief on the accent walls, flooring and logo.

The former departure area has been transformed into a bar and lounge, echoing the Art Deco use of sleek surfaces such as marble, stainless steel and brass, jewel colors, as well as faceted mirrors that suggest glass blocks of the ’30s and geometric furniture.

“We use saffron, which is very ’30s and works well with the blue and aubergine,” says Mackay.

The restaurateur favored the refinement and durability of Eramosa, also known as brown marble, for the main bar; brass trim only highlighted its richness. Coco designed the chairs with welded steel rods and a rust seat which Mackay calls “My Daleks Chair.” The futuristic design evokes memories of the British sci-fi show “Dr. Who” which featured Daleks or extraterrestrial beings.

In contrast, the Grill Room is more subdued, giving emphasis to the food and the views. The royal blue seats break up the monochromatic scheme of black, white and gray. The windows were widened, the ceiling was raised and the roof girders were exposed, leaving the mezza luna design with the finials.

“We wanted to create a lofty feeling of airiness, freshness and light in the building,” says Mackay.

“The only reference to aviation are the two Art Deco clocks on the wall. It was my idea of alluding to the departure lounges where you have two clocks of time around the world. One is set to Manila time and the other to California time, a reference to Asia’s first airline that flew across the Pacific to land in Oakland, California.”

The former control tower continues the design but is arranged like an airplane with a center aisle and seating on the sides. To double the capacity, the backyard deck has been transformed into an al fresco dining space with a trellis. Blackbird can easily seat 200 in the 600-s qm building.

Mackay says one could walk straight into the building all the way to the back, the way passengers did in the ’30s when they flew to Baguio.

“I love the fact that this is an old building. When I worked in Edinburgh after university in the ’80s and ’90s, I got involved in restaurants ensconced in old buildings. I’ve always been looking for old buildings in Manila, but I never found one. I was looking at the ’70s banks in Legaspi Village, thinking it would look cool and hip. But this is the crown jewel of the city,” says Mackay.

Aside from the literal interpretation of global cuisine, the food reflects the discreet culinary modernization that occurred in the ’30s in the West.

“It was the era of luxury ocean liners and big colonial hotels where grill was important. I’ve taken the grill concept of the ’30s and mixed it with a combination of classic European grill and Southeast Asian flavors. The food reflects the nature of the building, which was then the premier airport and gateway to the world,” says Mackay.

There’s a Korean influence in the flatiron steak with kimchi and hot sauce. The seafood platter with slipper lobster, tiger pawns cuttlefish and mackerel on a bed of fried noodles is served with Vietnamese nuoc cham sauce.

The all-day brunch highlights egg dishes combined with popular international fare. The Middle Eastern shakshouka is made of roasted tomato base with peppers and other spices. The

sweetness is derived from the slow-cooking process. It is topped with an egg and garnished with coriander.

Rice eaters will enjoy the Southeast Asian nasi goreng, or fried rice that goes well with fried egg and spicy skewered chicken. For continental tastes, there’s the familiar toasted bagel and cream cheese with cured (as opposed to the traditional raw) salmon gravlax and beetroot.

Among the starters, the Scotch egg is popular. It is prepared with prawn and garlic mousse instead of sausage meat on the quail egg. Crab cakes go with green apple, radish and mustard slaw and twice-cooked corned beef short rib.

For those in a hurry, the menu has some quick courses such as the pastas, the most famous of which are the pappardelle (flat pasta noodles) with comforting duck ragout and mascarpone, and open-faced lasagna loaded with portobello mushrooms, asparagus and fontina.

The pizzas, developed by chef Kerwin Go, are fermented for 24 hours to give them more flavor and make them lighter. The most popular is the speck and rocket with tomato and scamorza (soft, white cheese).

“I don’t believe in being too outlandish in food,” says Mackay. “I love the idea of farm to table which has become fashionable now. It’s like Italian cooking—take a product and don’t do too much to it. Let it shine, like the pasta which is just flour and eggs. Toss it with butter or olive oil and a bit of salt, it’s delicious. You can have a plain pizza like a Pizza Bianca. I don’t need 25 ingredients on plate,” says Mackay.

Tea also plays vital part in Mackay’s lifestyle as it does in the day menu.

“For me, afternoon tea is not represented well in the city. It’s all about sandwiches, sconces, creams and a few other bits and bobs and a pot of tea. We can do cream tea with Scottish scones or a full tea which home-cured gravlax, cucumber sandwich, macarons and a more contemporary mushroom tartufata sandwich. Throw in a glass of Jean Vasselle and you’ve got champagne tea.”

The evening menu includes more grilled items such as the Blackbird burger, made rich with chuck eye and rib eye beef.

So far, the most saleable item is the twice-cooked beef short ribs. The meats are grilled for two hours to bring out the sweet juices, and are served with an herb salad.

The Blackbird fish pie pays tribute to the British recipe made of smoked trout, salmon prawns and scallops poached with white parsley sauce, then infused with liqueur cream and topped with mashed potato.

The dessert menu is equally extensive. Everybody seems to order the burnt butter which adds richness and a taffy flavor to the vanilla seed ice cream. This sundae is made more indulgent with chewy brownies, candied popcorn and salted caramel.

Retro dishes are given a new spin. In the Baked Alaska, the tartness of the raspberry and passion fruit are a counterpoint to the sweetness of the meringue. The lemon meringue tart is given a subtle kick with peppercorn crust pastry and made aromatic with the lavender praline ice cream.

Mackay suggests a couple of dessert wines—the lighter German Riesling Spatlese which has a hint of residual sugar, and the heavier late harvest from South Africa.

“Late harvest wine becomes a golden syrupy concentration which is light and floral,” he says.

Since Mackay began his career in wine, he made the list extensive and sourced from around the world.

“I didn’t put in wines that you normally expect, like big house champagnes and well-established producers. I tried to find wines that were great value for money—individualistic, some organic and biodynamic. Some are made by small wine-makers while others are hand-bottled, like the Domaine Lucci from Australia which is a lovely Chardonnay. I didn’t mark them up too much.”

For fun he also invented cocktails such as Pussy Galore, a mix of double strain crème de peche lychee fluffed with egg white.

He aptly included Aviation, a century-old cocktail made of crème de violet, lemon and gin. The light flavor and the soothing blueness evokes the friendly skies.

All told, Blackbird represents Mackay’s journey. He was born in 1966 in Glasgow, the second empire city of the British in the United Kingdom. Unlike America that was then under the Great Depression, Scotland was flourishing in the 1930s, spawning many iconic Art Deco buildings.

He went to George Heriots, a private school, and took up hotel and restaurant management at the University of Strathclyde, Glasgow. A self-taught culinary artist, he would practice recipes from the restaurants at home. After graduation, he went on a world tour but ran out of money in Hong Kong before he could reach Japan.

Mackay then worked for a wine company and a restaurant. For holidays, he would visit the Philippines. Feeling at home in Manila, he settled in 1996 and opened Sala in Malate, which offered contemporary European cuisine. He has since moved his business to Makati with other restaurants such as Sala Bistro with its classic bistro flair and People’s Palace for Thai food. In the past 17 years, he has been incorporating new dishes inspired by his travels.

“Blackbird is multifaceted. You can come to the lounge bar for a drink and not even know the rest of the building,” he says.

“You can come in the afternoon with the kids and have sticky toffee pudding. There has to be flexibility in the space. Blackbird should not be seen as an elitist private club. It is for everybody to understand their heritage—that Nielson Tower was the first building in this area.”