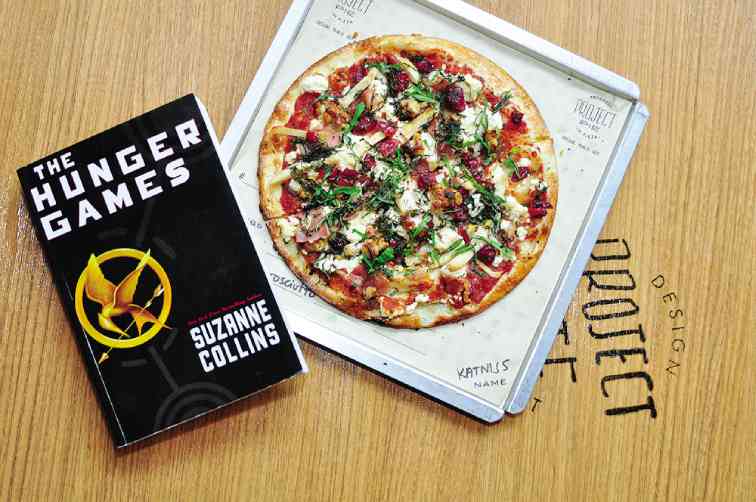 Project Pie has a list of tried and tested pizza combinations but most people flock to their stores for a different reason: The chance to build their own 9 1/2” pizza at a flat rate of P285.

There are 29 options for toppings—from old favorites (pepperoni, anchovies, fresh mushrooms, pineapples) to more unusual selections (pesto, jalapeños, artichokes, caramelized onions and crumbled meatballs). You can put as many and as much toppings as you want on your pizza—pie’s the limit. And if you decide to go crazy and use even their salad ingredients, they’ll accommodate to make sure you get the pizza of your dreams.

“Be adventurous. We want everyone who comes into our store to express their personality using pizza toppings. We want them to be as creative as possible,” said Jill Ilagan, Project Pie’s marketing manager.

That’s exactly what Inquirer Super did. But instead of focusing on our own personalities, to celebrate Paperback Book Day (July 30), we created pizzas inspired by popular characters at Project Pie’s Park Square store. (No spoilers, we promise.)

A servant approached. ‘Bread,’ Tyrion told him, ‘and two of those little fish, and a mug of that good dark beer to wash them down. Oh, and some bacon. Burn it until it turns black’

Because everyone’s favorite Imp is a bacon nut (who can blame him?), we topped our Tyrion Lannister-inspired pizza with typical bacon and the Canadian variety. Plus fresh mushrooms because he enjoyed a creamy mushroom soup with buttered snails in George R. R. Martin’s “Game of Thrones.” And because Tyrion loves wine, we paired this pizza with a bottle of Cabernet Sauvignon (yes, Project Pie serves beer and wine too).

We also thought of creating a Daenerys Targaryen pie but there are no stallion heart and dragon eggs on the menu.

The verdict: A crowd pleaser. You will love this pizza as much as you love Peter Dinklage. Its character is as salty as Tyrion himself.

‘I can make you an olive with mustard. Just one olive, though’

We can’t wait for the movie version of Gillian Flynn’s best-selling thriller “Gone Girl” to come out later this year. And when it does, we will go back to Project Pie to enjoy our pizza homage to Nick and Amy Dunne. Because marriage is a compromise, we made a half and half pizza that would please them both. On Amy’s side, we put ricotta, feta, crumbled meatballs and artichokes—food she enjoyed in the book.

We added one olive in memory of the moment she first met Nick at a party. Nick hates vegetables so his side is veggie-free. And we piled on the cold cuts, a fast and easy way to make sure your Project Pie creation is good. We added two kinds of cheese, mozzarella and parmesan, our tribute to the grilled cheese sandwich which Nick calls “an old Dunne standby.”

The verdict: Just like the characters in the book, this pizza will have you choosing sides. We couldn’t agree on this one— Pam likes Amy’s pizza while Tatin prefers Nick’s. But unlike in the book, there is no mystery here—both combinations are delicious. This would also make a good first date meal—it’s conversation fodder plus it’s onion-free.

‘I want to minimize the number of deaths I am responsible for,’ I said

John Green is the master of cheese so we had to include all five cheeses on Project Pie’s menu in our “The Fault in Our Stars” pizza. We added tomatoes in memory of Hazel and Augustus Waters’ picnic at the park, and garlic because of the green garlic gnocchi they ate at a special dinner. And because Hazel Grace Lancaster is vegetarian, we piled the pizza high with greens and herbs.

The verdict: The saltiness of the cheese made up for the fact that there was no meat on this pizza. But we think it needed a dash of spice—maybe jalapeños would have made this pizza even better.

‘On the table, under a wooden bowl to protect it from hungry rats and cats alike, sits a perfect little goat cheese wrapped in basil leaves. Prim’s gift to me on reaping day’

Food played a big role in Suzanne Collins’ “The Hunger Games” trilogy, illustrating the difference between life in the districts and the Capitol. We celebrated both aspects of Katniss’ life, from her humble beginnings as a hunter to becoming The Girl on Fire: Red sauce to symbolize her fearlessness as a hunter and a competitor in the games; ricotta, feta, fresh chopped basil as a tribute to Prim’s reaping day gift to her; prosciutto and grilled chicken because these were among the first meals she had on her way to the Capitol; walnuts because we loved “Nuts and Volts”; and of course, berries, the nonpoisonous kind.

The verdict: Although we enjoyed all the pizzas, The Katniss was our favorite. This turned out even better than we imagined, like a nonthreatening forest in pizza form. It’s so pretty, almost as if Cinna designed it.

The combination of ingredients was delightful—the walnuts added the perfect touch, the cranberries the right mix of tart and sweet. The only thing that would have made this better was if Peeta Mellark had thrown it to us.

‘Because that pipe doesn’t go to the Marshmallow Room!’ Mr. Wonka answered. ‘It doesn’t go anywhere near it! That pipe–the one Augustus went up–happens to lead directly to the room where I make a most delicious kind of strawberry-flavored chocolate-coated fudge …’

We couldn’t take credit for this one—the Strawberry Mango Nutella pizza (P195) is really on Project Pie’s dessert menu along with other sweet treats (Cinnamon Sugar With Icing, Peanut Butter Nutella, and Banana Nutella, all priced at P145 each). But we think Augustus Gloop from Roald Dahl’s “Charlie and the Chocolate Factory” would enjoy this pie. He is, after all, the boy so obsessed with chocolate that he ended up falling into Willy Wonka’s chocolate river. We’d love to fall into a Nutella river, too, if we could.

The verdict: Delicious. We loved this so much we ordered another pie to go.