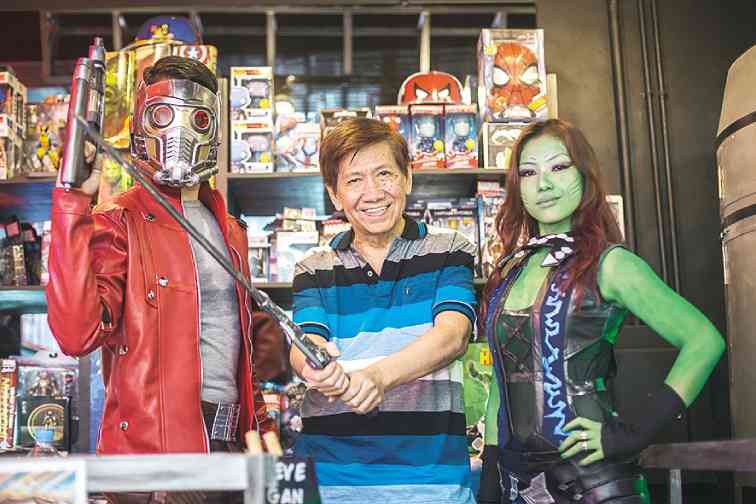 Steve Gan finally in the spotlight

Secret identities and alter egos are essential parts of a super-hero’s life. For comic book illustrator Steve Gan, his own hidden identity lies in having been a cocreator of the iconic Filipino komiks series “Ang Panday”; and now as cocreator of Star-Lord, the Marvel Comics character and leader of the titular “Guardians of the Galaxy” movie.

An unassuming, reticent man, the 69-year-old Gan is a naturalized Filipino citizen of Chinese blood who has made a name for himself as an accomplished comics artist. Yet early in his career, he already had tinkered with the concept of identity.

Born Santos S. Gan, he decided to change his professional name. “In my early days, I admired Steve Ditko, the man who created Spider-Man,” he says in a mix of Filipino and English. “There were many people named Santos in local comics … I incorporated ‘Steve’ (to my name), so I became Steve Gan.”

It was as Steve Gan that he got a huge break drawing for American comic book giant Marvel Comics, sending work through his United States-based agent, the late Filipino comic book legend Tony DeZuñiga.

Working on the series “Marvel Preview,” Gan collaborated with another great comic book mind, writer Steve Englehart, on a new hero. “They sent small sketches for the costume, like a guide,” Gan recalls. “He flew, like Superman, that was my feeling at the time.”

Wearing a helmet with a distinctive starburst crest, Quill battles extraterrestrial threats as Star-Lord after leaving Earth for the stars; his origin has changed a bit through the years.

Gan didn’t get to work on his creation after the first issue, though. “After that first issue, my agent left America, so the relationship got cut,” he says. He went on to concentrate on local comics.

In March, 1979, he cocreated a new character, this time with Carlo J. Caparas. “Ang Panday” told the tale of a magic sword-wielding hero named Flavio and would go on to become an icon of komiks as well as film and TV success.

Caparas has long been credited as the creator of “Ang Panday,” but Gan deserves as much of the recognition. “There’s no law in the Philippines that states that cocreators have rights,” Gan explains. “The US has those.”

Gan went on to work on animation series and has stopped drawing comics for the last 12 years. “I just got tired of it,” he admits.

In the meantime, his Marvel hero gained a fan base. After being resurrected by Marvel as a big player in its cosmic comic books and receiving a metal face mask, Star-Lord became the weapon-toting leader of a motley band of unlikely space heroes called the Guardians of the Galaxy.

The Guardians headlined their own critically-acclaimed series and Marvel Studios chose the property for the film treatment. Directed by James Gunn, Marvel’s live-action film “Guardians of the Galaxy” is currently screening worldwide, with actor Chris Pratt as the daring and funny Star-Lord.

All this has come as a surprise and a delight to Gan. “It’s like a dream,” he says with a smile. “It’s great for your creation to sort of come back to you after 38 years.”

Not only is he now getting recognition for cocreating Star-Lord, other rewards are coming as well. “Marvel contacted me,” he tells Inquirer Super. “They said they will be giving me a substantial amount for this project because I am cocreator (of Star-Lord). They will give me something, even for the toys, video games and other things.”

On July 26, the Marvel-exclusive retailer Kapow! Universe held a special signing event for Gan at its Glorietta 5, Makati store. Fans patiently lined up to have their comic books signed by Gan. TV crews arrived for the event, which was also graced by “Guardians” cosplayers, including one dressed as the current incarnation of Star-Lord.

Gan gamely posed next to his creation as well as a rare copy of “Marvel Preview” #4 which was part of Kapow’s “Guardians” exhibit.

These days, Gan runs a workshop that sells original art and pinups worldwide on eBay under the seller name blacksmithshop2006.

Aside from being surprised that the character he cocreated is now in a movie (“That’s great even if he isn’t the solo star”), he didn’t even know that Star-Lord top-bills his own ongoing series from Marvel, “Legendary Star-Lord.”

Gan says he’s happy for the attention; it’s even gotten him active with drawing again, even as he points out that he has no plans to return to comics work. “I am practicing again for the fans because many ask me for sketches,” he explains.

All this is fantastic news for Filipino followers of comic books. “I think it’s a huge testament to the talent of the Filipino and I wish we had more opportunities to create content for the global market, not just in artwork but in writing as well,” says Kapow! Universe’s Ivan Guerrero.

As Star-Lord soars on the big screen and through full-color comic book pages, Steve Gan is finally in the spotlight—now everyone knows who he is.