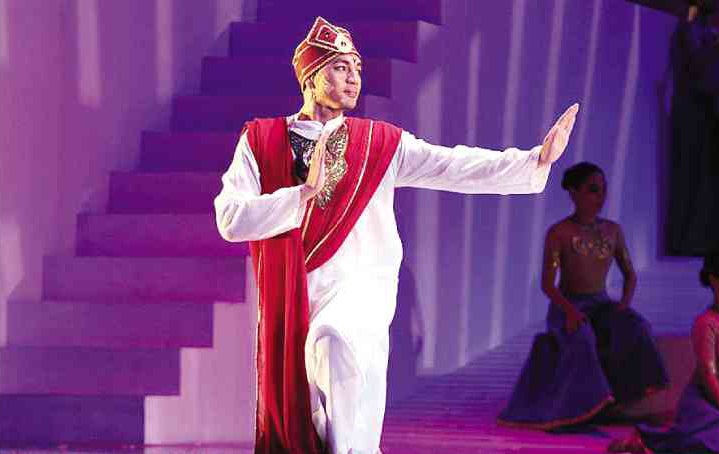 OJ Mariano is one of the fastest success stories in contemporary local theater. But that’s getting ahead of the story.

His first love was singing. In 2004, in season 2 of ABS-CBN’s “Star In A Million” reality singing competition, he placed third.

This was followed by a debut album (“A Dream Come True”), which bagged for him the 2006 Awit Awards for Best New Male Recording Artist.

Then he figured in a gaming corporation’s musical-acrobatic show.

In 2010, Mariano auditioned for a new production of the Broadway musical “Rent” that was being staged by newbie company 9 Works Theatrical, under Robbie Guevara’s direction. He was cast to play Tom Collins—and in that role, he exploded on the scene, singled out for acclaim in all the reviews of the show. Fans also rewarded him with a BroadwayWorld-Philippines award for Best Featured Actor in a Musical.

Mariano hasn’t stopped working since then, almost always in lead parts. He essayed the roles of Tunying/Simoun in Dulaang UP’s “Isang Panaginip na Fili”; Victor Vidal and Daddu Bruckbeck in 9 Works’ “Sweet Charity”; Sebastian in Atlantis’ Productions’ staging of Disney’s “The Little Mermaid”; and Paco in “Rivalry: Ateneo-La Salle, The Musical.” He was also part of the four-person cast of Upstart Productions’ “Forbidden Broadway”; played Ferdinand Marcos in Chancel Repertory’s “The Choice”; and was Gary Coleman in Atlantis’ touring production of “Avenue Q,” which performed at the Grand Theater of Marina Bay Sands in Singapore.

He capped that blistering run with an Outstanding Male Lead Performance in a Musical award from the 2012 Philstage Gawad Buhay! for Ballet Philippines’ revival of Alice Reyes’ landmark dance-musical hybrid “Rama, Hari.”

Last year was just as busy for Mariano, with appearances in “The Full Monty,” another Atlantis production; the concert production of “Himala: The Musical”; and “Lorenzo,” Nonon Padilla’s musical production on the life of Lorenzo Ruiz, with music by Ryan Cayabyab.

Now done with a part in “Priscilla, Queen of the Desert,” staged at Resorts World Manila, Mariano is currently alternating with Robert Seña in the role of a befuddled father in Peta’s “Rak of Aegis,” which has been running since June and will go on till August 31.

“Theater offers more options for me as a singing actor,” says Mariano. “And my involvement in theater has totally harnessed that. I have a greater respect for both crafts now, singing and theater, and the hunger to develop and learn more is growing.”

Bagging a part in “Rent” was “instantaneous love,” he recalls. On his first opening night, the theater was packed and he felt like his heart was about to burst.

He has developed his own preperformance ritual: “I always make it a point to do the Sign of the Cross when I’m about to enter every scene, and that usually helps. Stage fright never goes away; I just remind myself of the joy that I will feel when I’m already performing, and that excites me.”

Also, “resting my whole body is key for me to be able to give a good singing performance, so I make it a point to rest a day prior to a show. And a lot of hydration, too.”

For “Sweet Charity” he learned to dance, and the regular dance classes helped him adjust from nondancer to real pro: “I didn’t really consider myself a dancer. But we had dance classes for that show and everybody had a great time doing them. Learning how to dance is quite memorable for me.”

He can’t quite forget doing “Forbidden Broadway,” either, because he shared the stage with theater icon Lea Salonga, who guested in one performance.

“Avenue Q,” meanwhile, was his first foreign production (and first foreign audience), while “The Full Monty” got him to do something he had never imagined doing: “Dancing in a G-string and taking it off in the last few seconds of the show!”

“My first memories of theater were actually watching Peta productions at Rajah Sulayman in Fort Santiago,” says Mariano. “My family loves watching theater, and they are very, very supportive. They watch a show I’m doing at least three times in the whole run. And my tatay promotes my shows in Facebook a lot!”

While he started out as a singer, he says theater has given his singing a new dimension.

“I think I sing with more intent and heart now than before. It has dawned on me that my future really lies in theater. I would love to be welcomed onstage by the audience for many more years to come. Apart from the recognition, I would like to be regarded as an actor of truth. I look up to actors like Nonie Buencamino, and I would love to grow into the same regard and respect that he gets so deservedly.”