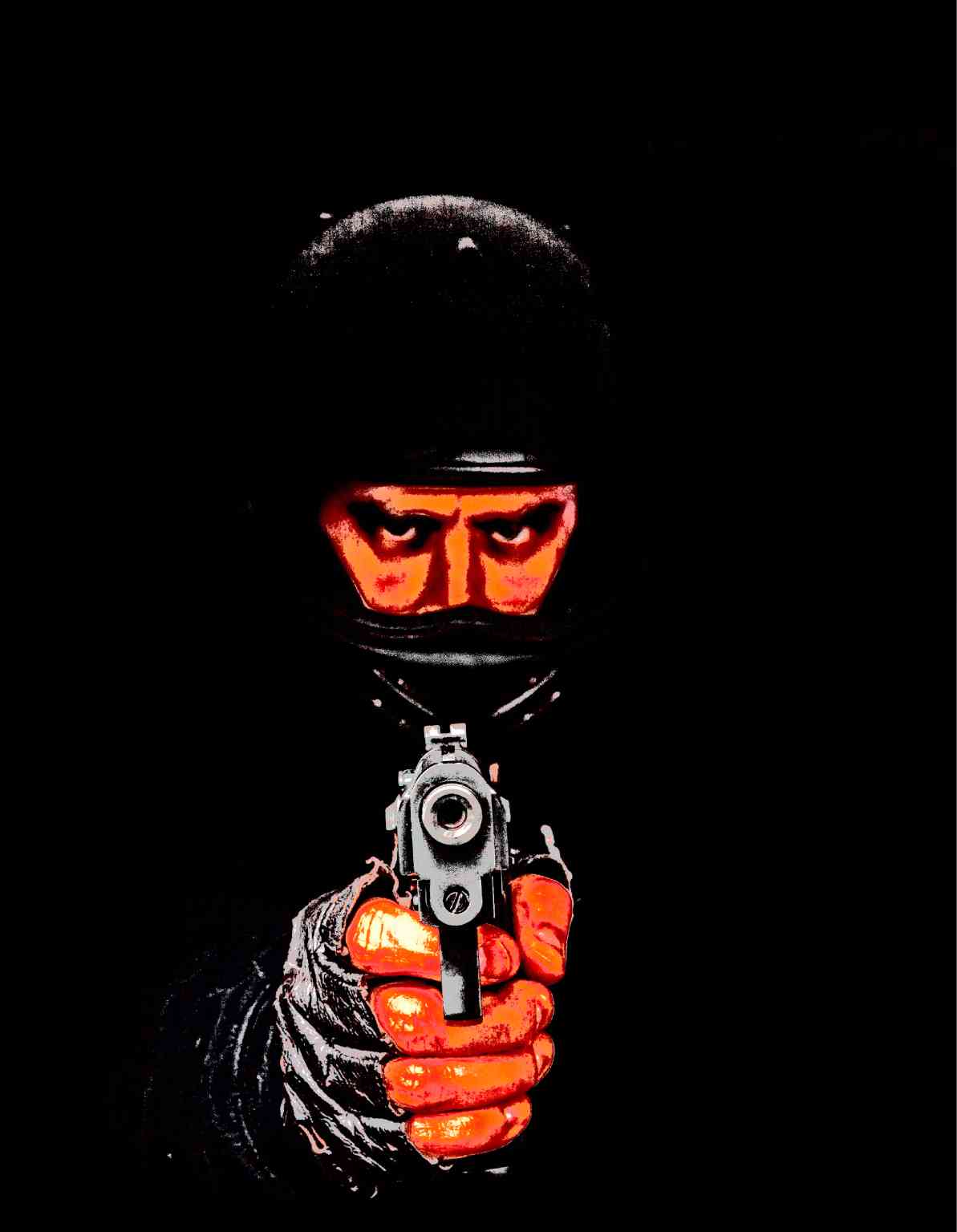 SUSPECTS: A police raid on a house in Fairview nets suspect Mindalano

The mad killers of Quezon City

It was a case of being in the wrong place at the wrong time.

On May 11, 2014, four people were gunned down in separate incidents along Commonwealth Avenue and Regalado Highway in Quezon City in the space of an hour.

All the shooting incidents happened early in the morning, within close proximity to each other, and involved the use of a 9-mm pistol.

The victims were all in their thirties, although this added little meaning or significance to the randomness that has since shocked both investigators and public alike. The perpetrators were described as “mad killers” and the shooting spree, “thrill kills.”

“They are monsters,” an investigator on the case said of the killers in an interview with the Inquirer. “I have no idea why the victims were shot,” said another policeman from the Fairview precinct.

Police would later conclude that the shooting spree was drug-induced. The suspects, three of whom are now facing four counts of murder before the Quezon City Regional Trial Court Branch 87, belong to a Muslim drug syndicate that has been in operation for years.

The case was deemed closed and its investigation over three days after the crime, according to police who had insisted to SIM that “everything (was) in the report.”

Despite such official assurances, the May 11 shooting also brought to the fore the sensitive debate over a total gun ban amid such violent incidents, and the ordinary Filipino’s right to self-protection.

The debate has continued, as people ask:  is a total gun ban even possible today?

The shooting spree in Quezon City began at 1:30 in the morning in front of Power Grid Electrical Corp. along Commonwealth Avenue.

Rodelo dela Cruz, 34, was traveling on his motorcycle when he was repeatedly shot by two suspects—Alsaid Mindalano and Mohammad Mautin Sandigan.

Dela Cruz died instantly with a gunshot wound to his torso, according to a post mortem examination.

But the trail of bodies did not stop there.

On board a red and white motorcycle that had “Marlboro,” painted on it, Mindalano and Sandigan, along with two others on board another black motorcycle, turned right at Regalado.  Some 50 meters from the corner, the two spotted Gelmer Gabronino and Angelie Anguis, both 35, on board their own motorcycle.

A witness, who in the police report was said to be driving by the area in a car, recounted how the suspects chased after the two who were out late to buy some medicine. When the suspects opened fire, both Gabronino and Anguis were hit on the head and fell dead.

The fourth death happened only a few minutes later, near the Regalado entrance of Fairmont Park Subdivision.

Alodia Grace Go, 37, had just gotten down from a bus when Sandigan aimed and shot her twice in the head and neck. She died around 2:30 a.m., roughly an hour after Dela Cruz was killed. The suspects fled after that, driving southbound to Commonwealth Avenue.

Another suspected victim of the shooting spree was a scavenger sifting through garbage along Commonwealth, who was also shot in the head.  But police did not include him in the investigation and the ongoing case filed at the RTC because the bullet recovered from the scene was that of a .45-cal. pistol.

The “mad killers,” as described then by the Quezon City police, were no ordinary citizens. The May 11 incident was not the first time that police had encountered Mindalano, Sandigan and the drug syndicate to which they belong.

Back in December 2011, police had engaged in a shootout with members of the group in a gas station near Fairmont Park Subdivision in Fairview, Quezon City. One person died in the incident, suspected by police to have been killed in relation to drug money.

A policeman, who requested not to be named for lack of authority to speak on the matter, said that even before the 2011 incident, Mindalano and Sandigan’s group was notorious among police for drug trafficking, and were suspected to also be responsible for other gun- and drug-related deaths in Quezon City.

“[The higher-ups] tell us to do something about it, but it’s more difficult than it looks,” the source said. “[Where they’re staying] is a dangerous area.”

Bringing down these drug syndicates, he added, is a different matter entirely and a long way from being solved.

On May 13, two days after the shooting spree, police raided a house in Fairmont Park Subdivision using a previously issued warrant of arrest against the suspects.  There they apprehended Mindalano and four others, two of whom were later freed—either for being a minor or for lack of evidence.

Sandigan was not in the house at the time of arrest; he remains at large.

Among the items confiscated by police from the suspects’ home in Fairmont were “several firearms loaded with ammunition, several pieces of ammunition for 12-gauge shotguns [and] two pieces [of] fragmentation hand grenades,” the police report stated.   As expected, the weapons did not have licenses.

The guns and bullets found are only some of over 600,000 loose firearms in the country, as estimated by the Philippine National Police (PNP).  By definition, loose firearms refer to any gun not registered with the PNP, whether smuggled into the country or without an updated license.

Unlicensed firearms and irresponsible gun users have long caused trouble in the country, according to police reports.   Last New Year’s Eve, for instance, a 7-year-old girl was hit and died after a gun was fired in the midst of the revelry.

Chief Supt. Theodore Sindac, PNP spokesperson, said the higher number could be due to the fact that “crime reporting has become more efficient.”

Police data also showed an increase in the number of crimes solved in the country, from 61.96 percent in the first quarter of 2013 to 68.36 percent in the same period this year.

According to the Quezon City police, its role in bringing down the crime rate and ensuring people’s safety depends a lot on the efficient management of checkpoints in the city, especially along populated areas like Commonwealth Avenue.  But  the exact number of checkpoints was unavailable however, because each police station set up checkpoints at its own discretion.

Today, the debate for or against a total gun ban remains divisive.

In 2011, Sen. Gregorio Honasan III said the country was not ready for the ban because the government was not ready to fully protect its citizens without firearms.

In 2013, President Aquino, while in full support of curbing gun violence, similarly said he did not believe in a total gun ban, describing such calls as “knee-jerk reactions” that won’t lessen gun-related crimes.  The President and several of his Cabinet members are known to be avid target shooters.

“A law that seeks to reform the outlaws will not work. You need a law that will sanction them further and (will) prove as a deterrent,” the President said.

One such law is Republic Act No. 10591, or the Comprehensive Firearms and Ammunition Regulation Act of 2013,  that updates an older law’s classification of firearms, requirements and procedures on obtaining and maintaining a gun license, and penalties for illegal firearm possession.

Most notable in the changes are the reclassification of offenses. While the older law identifies only two kinds of offenses that can be committed by gun wielders, RA 10591 lists separate offenses for gun and ammunition acquisition and possession, and for the unlicensed manufacture, importation, smuggling and sale of firearms, which hold stricter penalties.

“[RA 10591] is meant not just to standardize the regulation of firearms, but to help us intensify our campaign in curbing gun-related crimes and establish effective firearms control,” PNP Chief Director General Alan Purisima said after signing last year the implementing rules and regulations of the new law.

Supplementing the PNP’s campaign is a six-month amnesty for those in possession of unlicensed guns.  Beginning July 12, owners of unlicensed firearms may register with the PNP Firearms and Explosives Office in Camp Crame without sanctions. Once the period for amnesty passes, wielders of unlicensed guns may face up to 30 years’ imprisonment.

But Sindac noted that the temporary restraining order (TRO) being lobbied by progun groups and imposed by the Supreme Court earlier this year, has delayed the amnesty’s implementation until further notice.

One such group that sought the TRO was the citizens’ group PROGUN Philippines, which stands for “Peaceful Responsible Owners of Guns.” Their stance: RA 10591 strips Filipinos of the right to self-defense.

Attorney Ernesto Tabujara III, PROGUN secretary general, explained PROGUN’s main premise that RA 10591 was not the solution to reducing gun-related crimes in the country. In fact, he stressed, instead of punishing criminals and individuals in possession of loose firearms, the new law punished only legitimate gun owners who, as long as they are responsible users, have every right to wield guns for their protection.

PROGUN’s position paper against RA 10591 also states that there are not enough policemen to protect citizens and that police work is reactive rather than proactive. It also said that the use of firearms in self-defense is supported by Supreme Court rulings, while a total ban has proven not to be feasible in other countries.

In a previous interview with a TV network, Gunless Society founder Nandy Pacheco said RA 10591 will make guns more accessible and thus, make it easier for gun owners to resort to violence.

Why make it easier for gun owners to reach for their gun in resolving conflicts, Pacheco asked, when removing guns could lead to more peaceful solutions?

Another debate sparked by the Commonweath killings is the need for protective helmets among motorcycle riders.  While helmets lend an added safety feature to riders, they also obscure the rider’s identity and have been cited as a decisive factor behind most crimes committed by felons riding tandem.

In fact, Zamboanga Rep. Celso Lobregat has filed a bill that would suspend provisions of RA 10054 or the Motorcycle Helmet Act of 2009 to address rising criminality in the country.

Opening the debate on these two crucial issues may be the only upside to the mad killings in Quezon City, but until the victims extract full justice from the law, even that remains debatable.

—With reports from Inquirer archives