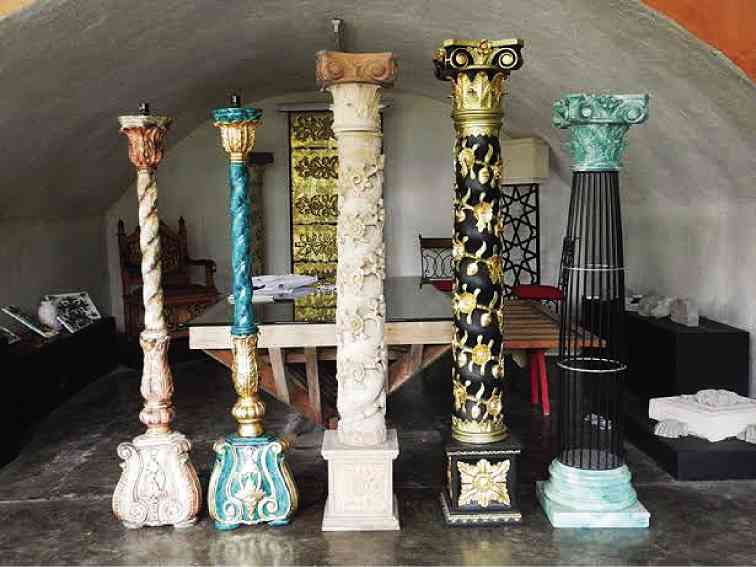 These underprivileged youth are now guardians of history

HAD Ramon* not been an exemplary student of work carving, he would probably be a ranking member of the Moro Islamic Liberation Front by now. That is, if he was still alive.

Paulo* said he would probably still be snorting away at plastic bags half-filled with glue while harassing passers-by along Roxas Boulevard.

And Josie* might still be evading knife attacks by her male guardian, who tried to rape her whenever his common-law wife left their shanty in Tondo.

Ramon, Paulo and Josie are three of the 52 recent graduates of Escuela Taller (Escuela), the conservation and restoration workshop for underprivileged youth sponsored by the Spanish government; they finished 18 months of training on masonry, carpentry, painting, plumbing and electrical and metal works.

Escuela was set up in Manila in 2009 and is the brainchild of former Spanish Ambassador Jorge Domecq.

The original Escuela was established in Spain in the 1980s. Other talleres were set up all over Latin America beginning 1991. By 2007, there were 36 workshops.

So far, the local campus tucked in Revelin de Recoletos along Victoria Street in Intramuros has witnessed the graduation of 178 individuals in three batches.

Escuela’s Manila graduates, however, see the workshop as something much more than just a learning center.
It is in part a haven from domestic abuse, an evacuation center and a spiritual sanctuary. Their stories say one thing: Escuela is their second (or last) chance at finding a decent way to survive.

Paulo cried openly while telling his story. Only in his late teens and already the father of a toddler, he was wasting his life sniffing glue as he waited for a chance to steal from cargo trucks leaving the port area.

Concerned citizens led him to representatives of the Department of Social Welfare and Development (DSWD) who helps Escuela scout for potential students.

(Apart from DSWD, Escuela’s other partners are the National Commission on Culture and the Arts, Intramuros Administration and the Technical Education and Skills Development Authority.)
“There was a drug test. I was worried because I might test positive… That would be the end of it.  Why would they take me in?” he recalled in Filipino.

Paulo need not have worried though. Gie Santos, Escuela’s student affairs officer, said he fit the school’s “qualifications” for entry as a scholar.

Tats Manahan, instructor for historical paint and decoration techniques, said Escuela searches for out-of-school-youth who are underprivileged but willing to learn.

Escuela’s methodology is summed up as “aprender haciendo, trabajar aprendiendo” or learn by doing, work by learning.

A huge exhibit area in the National Museum currently showcases works of the school’s graduates.
A corner features a single slab of wood treated in the artesonado carving technique of Moorish influence that gives the illusion of several blocks or pieces arranged one on top of one another.

Another portion of the hall shows two grilled estipites or columns in the Baroque style used in altars that were recovered from Domecq’s basement, restored and painted by Escuela graduates while retaining its aged patina.

Bulaong said the scholars are also trained in painting faux finishes like marbling, parchment and granite.

Her pride was evident when she came to a spot showcasing photos of students who joined a quick response team sent to the Basilica Minore de Cebu, following a distress call from the Order of St. Augustus after the October 2013 earthquake that hit the Visayas.

Escuela students joined in the documentation of the damaged belfry as well as in the sorting and storage of coral stone debris, preserved for inclusion in future restoration efforts.

Decoration techniques instructor Manahan said it is this kind of discernment Escuela scholars are trained in that sets them apart from ordinary construction workers.

Items in the exhibit would show that level of sensitivity that Escuela students have been imbued with, said Dr. Jaime Laya, chair of the Escuela Taller Foundation Inc. board of trustees.

“Their added advantage is that they have been exposed to other aesthetics employed in restoration of decorative elements in stone, wood and lime plaster,” Manahan pointed out.

Lectures in art appreciation and history are often given by workshop instructors from Mexico, Spain, Italy, England, Germany and the US “who themselves are products of advanced training in schools” abroad, added Manahan, who underwent intensive training in Italy, San Francisco and New York.

Laya said a local teacher of note is Willy Layug (“one of the our most highly accomplished wood and paint experts”).

Escuela insiders said local heritage structures that its graduates have participated in restoring are the façades of the Our Lady of Remedies Parish (Malate Church) and Our Lady of the Abandoned (Sta. Ana Church) in Manila; La Casa Manila and the Almacenes Reales structures in Intramuros; and a school in Malabon.

“No other trade school trains their students to develop the skills needed to restore an old structure,” Bulaong said.

Laya noted the necessity of workers versed in conservation and preservation.

Cities abroad, he said, have entire districts of old structures that are vibrant centers of modern life, like the French Quarter in New Orleans; Central London with its Georgina structures; Paris with its 17th and 18th century buildings; and Barrio de Santa Cruz in Seville, Spain.

He added that more than half of the important old houses identified by the United Architects of the Philippines about a decade ago are now gone.

Globalization and its pervasive influence have done little to pressure Filipinos into preserving whatever little is left of their cultural identity. Hopefully, the precious few surviving markers that indicate tangible heritage could still be saved, he said.

Vicente Selles Zaragosi, coordinator general of the Agencia Española de Cooperacion Internacional Para El Desarillo (AECID), noted that from the initial batch of 75 students picked from the Baseco compound in Tondo, Escuela has opened its program to include apprentices from as far as Vigan, Ilocos Sur and Minalin, Pampanga.

Laya said Martin I. Tinio, Jr., an authority on old houses, noted that some of the best works in the museum exhibit “were done by a student from the Cordilleras.”

During the graduation ceremony last July 21, Zaragosi said the Embassy of Spain, through AECID, had contributed P125 million for cultural heritage conservation efforts in the Philippines through the school.
The Spanish government’s Escuela project ends this year, and its work will continue through the newly organized Escuela Taller Foundation chaired by Laya that was organized last January.

Zaragosi announced that a “branch” would be opened in Dauis, Bohol, on Aug. 4 to help the National Historical Commission of the Philippines, the Diocese of Tagbilaran and the Ayala Foundation to restore the Dauis watchtower and church.

Laya said the specialized skills of Escuela graduates are much needed in these endeavors.

However, one challenge that Escuela faces is convincing contractors and owners of heritage structures that the graduates’ conservation and restoration skills are different from those of ordinary masons and carpenters.

“Their skills would be wasted if they are employed to erect hollow block fences or Edsa waiting sheds,” Laya said.

To date, there is no institution that helps Escuela graduates find work to match their specialized skills.

“Escuela is a school and not a construction company, and one way of assisting graduates is to help them organize a cooperative that can accept jobs that do justice to their skills,” Laya stressed.

Santos, Escuela student affairs officer, said the intensive training received in Escuela has done wonders for most of the students.

Bulaong said a male student known to pick fights with his colleagues showed true grit when he was called to the quick response operation in the Basilica Minore de Cebu and displayed his leadership skills.

Manahan told of another male apprentice who “couldn’t paint a flower or a leaf to save his life” but whose neatness at work was eventually noticed by his peers.

“Today, he is one of the best painters… When he was still studying, I heard his house was made out of tarpaulin. Today he has built a little house for himself made out of wood with his earnings from the past two years,” she added.

There is also the story of a boy and a girl who met in Escuela, married and worked as a team to restore stone finials in a Calatagan chapel for the Zobels.

“Some students have not just developed skills, but found themselves and developed leadership traits.  They no longer scratch their heads or nervously pick their noses or ears while you are talking to them. They have confidence now,” Manahan said.

*Names have been changed to protect the graduates’ privacy.