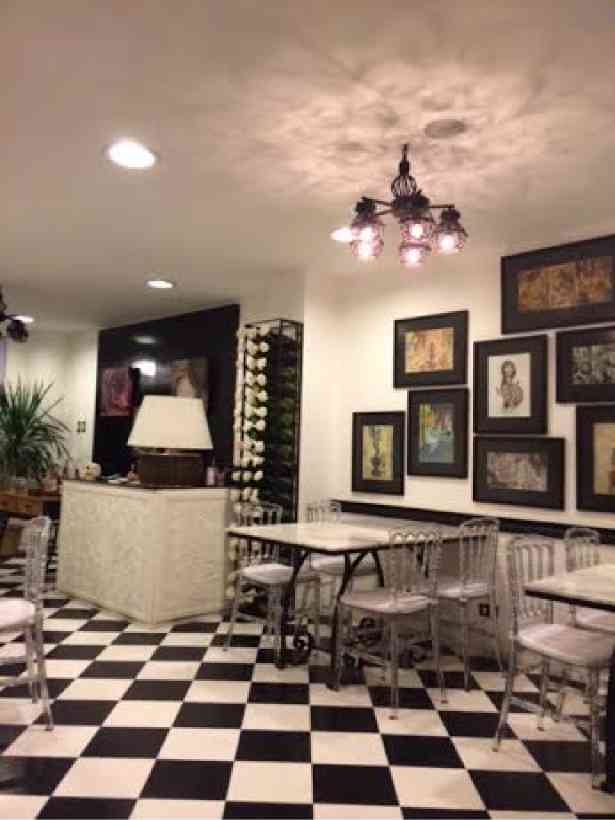 THE GIRL+the Bull resto in BF

My kind of restos in BF Parañaque

FRIENDS have been asking me to do a dine-out guide to what should be the longest resto strip in the country—Aguirre Avenue in BF Parañaque. So here it is—the restaurants/dine spots I try in BF, usually on Sundays.

The list covers what I and my family have sampled or do frequent; it’s what suits our taste and budget. It may not necessarily suit yours, so in that way, this isn’t necessarily your guide. (Take or leave it.)

I doubt if a guide to the dining spots on Aguirre Avenue, from end to end, could ever be completed. Establishments close as fast as they open. There are just too many. I’ve asked friends and writers to do it, but nobody wanted to commit or has focused on doing it, not even Inquirer Super editor Pam Pastor, she with the intrepid appetite.

BF Homes in Parañaque and Las Piñas was said to be the biggest residential subdivision in Asia, with hundreds of thousands of households. I don’t know if it still is. One thing is obvious, however: Its main artery, Aguirre Avenue, has been left to metamorphose on its own commercial steam.

It was as if the neighborhood woke up one day, and yikes!—it’s now all restaurants, fastfoods, bars, takeout counters, etc. You name the food, it’s there, from shawarma and arroz caldo (Goodah!) to chicken inasal to Italian and Greek. Is our suburban appetite that insatiable? (And don’t today’s moms cook anymore? I don’t.)

If I were to use my sons’ appetite as gauge, it is. But my boys are always after value for money. Hype doesn’t work on them. They’re after a place where they can eat with contentment, if not past contentment. They always mean to beat the “house,” as it were, as if the resto were a casino.

My boys can eat a resto out of business in BF. As a matter of fact, I think they did, once—a yakiniku place with eat-all-you-can grilled meat. My boys kept on ordering and gobbling up the steak (thankfully, one of them has cut down on meat since then) until the smoke got so thick I couldn’t see any of my boys in the haze, and I almost had to duck under the table. That place closed down in a month or so, but it served good yakiniku.

Hole in the wall

For a time my boys loved going to this hole in the wall, Tatsunoku, which is actually off Aguirre Avenue, on the far end of El Grande Avenue, right before the guard house leading to Lopez Village. Its façade is so nondescript that you’re bound to miss it unless you’re reading each and every sign of the establishment on that row.

It’s a rundown bungalow. My sons love it because they can order their full mixes of sushi, sashimi, their salads, cold noodles, tempura, fried rice and even beef or chicken teppan, and the bill—for the three of us (I actually count each of my sons as two because their appetite is always double)—comes up to less than P1,500 so that’s less than P500 each. This isn’t surprising, because a plate of sashimi is about P75.

For a time, it was Tatsunoku every Sunday until I put my foot down and told them I saw a cockroach creeping up the wall (which didn’t turn off my boys anyway; one offered to crush it), and more important, I wanted ambiance to go with my food.

My pleading worked. (To take my eyes off the sawali walls, I had to stay glued on  “Pilipinas Got Talent” on the TV monitor, the only one, on the wall. My Sunday! But the food was really good.)

So off we went in search of another “good” Japanese restaurant (Read: eat all they can). We tried Ramen Kuroda, a new establishment right on Aguirre—and with ambiance. You can pick your ramen—and to go with it, free soup, appetizers, fruit and main course. So you can have your ramen, and your katsudon main course, for instance, for a little less than P500.

I like that, and its ramen is good. My sons liked it, too—for about two consecutive Sundays, and that’s it. They really always go back to their first love—Korean food (again, eat all you can, of course).

People aren’t exaggerating when they say BF is Korean food mecca. It really has all sorts of Korean restaurants which, unlike my family, I’m not keen on exploring. My sons have always been hooked on Bi Won, right on Aguirre Avenue. It’s their go-to Korean resto, and for good reason: It has good meat (one son eats beef tartare), noodles and vegetables, and has good servings. It’s not eat all you can, and isn’t exactly very cheap.

Just last month, my sons discovered another Korean resto, this time it’s eat-all-you-can buffet and Korean barbecue. The buffet is okay—from kimchi, noodles and salad to beef teriyaki and fried rice—and the barbecue beef, pork and chicken are fresh. All these for P490.

This restaurant, named Aladdin (Unlimited Korean BBQ), is my sons’ “flavor of the month.” It’s on Aguirre closer to the El Grande Avenue traffic light. They’re overdosing me on Aladdin this month, I’m afraid.

But if I have my way, I go to Hanakazu, a popular destination of even non-BF residents. I run into friends from Makati, people who have a high regard for the Japanese chef-owner. As you can guess, I come here with my friends, not my sons who find it pricey. It is. Hanakazu has the best sashimi and sushi, and what I like is its hamachi.

Beyond the Japanese-Korean fare, I and my friends have discovered good dining places, with good ambiance (take note, if ambiance is on the agenda, my sons count themselves out). Bamba, a cozy resto near the guardhouse of Aguirre Avenue, has good salads, burgers, pasta and desserts.

On the opposite end of Aguirre Avenue, right past the Aguirre-El Grande intersection traffic light, is The Girl + The Bull. It was talked about when it opened early this year, run by a couple barely out of college; the guy loves to cook, with no formal training, and his girl helps him run the resto.

Even its service staff is so young that I had to ask them if they had graduated from high school. They seem to be college kids out to learn and enjoy themselves.

My friends loved the restaurant’s burger and steak; I liked my pumpkin soup and the dessert.

My personal favorite is Don Limone, which Lifestyle wrote up years ago, a mom-and-pop affair, and I believe that the couple running it want to leave it that way. It has Italian and Mediterranean dishes, and its draw is its wide array of cheesecakes—all kinds from New York cheesecake to blackberry to Toblerone.

Try its lamb kebab with risotto. I finished its pizza because my sons aren’t into carbs. This is one BF resto which displays the photo of President Aquino who, it is said, tried its food once.

For Chinese cuisine, I think nothing beats Mandarin Palace on Aguirre Avenue. It is always full. My friends and I tried its lauriat once—good and reasonably priced, with good dim sum and Peking duck. (But I can never get my sons there; they’re not into Chinese food.)

A favorite after-dinner place is Larcy’s. The success of this cupcakes place is impressive. And like many cupcakes places, it is a dainty paradise of sweet options. Choose your sugar overload. My sons are not into desserts, but I can get them to Larcy’s.

There’s Bacolod Chicken Inasal, an old original BF restaurant that continues to draw people in. Its chicken inasal, chicken skin chicharon and garlic rice are the best comfort food. I’ve tried other branches, but they’re not as good as the old one in BF. And its interiors haven’t changed all these years, not even its
window-type air-conditioning, I believe.