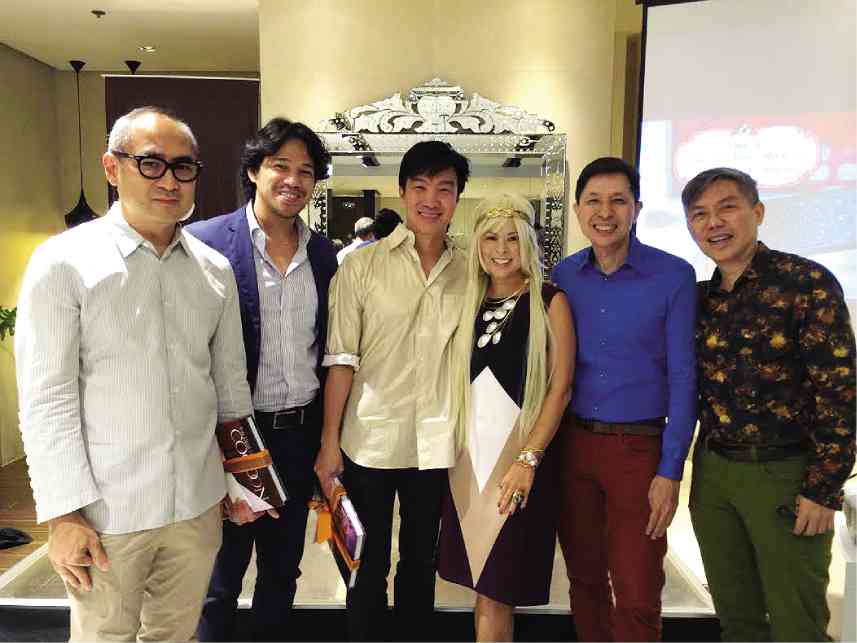 ROMANCE keeps life exciting. It may be a challenge to keep love alive after 20 years of marriage but there are creative ways to make it last. Watching romantic movies is one way.

Trust Swatch grand dame Virgie S. Ramos to come up with an intimate, private affair at the movies on short notice, and still have all the entertainment details wonderfully present. Swatch hosted a private screening for hot hunk star and Swatch brand ambassador Derek Ramsay for his new movie, “Trophy Wife,” a Viva Films/MVP Entertainment co-production film, directed by Andoy Ranay with screenplay and story by Keiko Aquino.

Fresh from our vacation, my hubby Dennis and I were delighted to join Tita Virgie and her Swatch guests for the screening. We had high expectations for the sizzling sexy scenes of Derek and his two leading ladies, Cristine Reyes and Heart Evangelista.

At My Cinema in Greenbelt 3, food guru Margarita Fores prepared a sumptuous menu of pasta, cheeses, marinated tomatoes and an assortment of home-baked breads. All Swatch events have top-notch food, and this was no exception, down to the details like Parmesan-truffle oil popcorn during the screening.

A two-layer birthday cake by Costa Brava was wheeled in for the night’s birthday celebrator, Derek Ramsay, Sr., Derek’s dad. He was quite excited to watch his son in action even if his Tagalog is minimal.
After settling in our seats, John Estrada cheered on his co-star Derek as he was thrilled to play the older brother role that provides a thrilling twist to the movie.
“Trophy Wife” has some unexpected plot twists that make it a unique film.

It was great to also see our friend G Tongi play an important role in the film. The wonderfully edited film is running in movie theaters nationwide.

After the movie, the viewers resoundingly applauded stars Derek, John and Cristine. Tita Virgie thanked the guests and proceeded to announce the night’s “Trophy Wives,” each of whom received a crystal gift. The “Wives” were Clarisse Tiu, Priscilla Meirelles-Estrada, Millet Mananquil, Cristine Reyes and yours truly.

We all chatted until the wee hours over a delicious and different post-movie menu of lugaw and champorado.
Elegant homes in one tome

A large part of the movie is filmed in a beautiful, sprawling house done by architect Rolly Mercado, who joined us for the screening. Other elegant homes, like Rolly’s designs, are showcased in the latest Hinge Inquirer publication, “The Best of Cocoon Magazine.” The country’s foremost architects, interior designers and decorators came to the book launch at the Kuysen showroom in Makati City.

Inquirer Lifestyle editor Thelma Sioson San Juan is the editor of the 277-page, coffee-table book that is a compilation of some of the best homes, living spaces, gardens and furniture pieces featured in Cocoon magazine.

Artisanal home design and modern Asian accent pieces are beautifully photographed and arranged in the book. Thelma carefully chose the homes from the 4-year-old interior design and homestyle magazine of Hinge Inquirer.

Destileria Limtuaco served their special liqueur cocktails with calamansi and mango for Cocoon. And just like chef Jessie, we also worked with lovely Olivia Limpe-Aw, who heads this liquor company, for our #DandTLove20 giveaways.

She made three miniature bottles of Manille, Amadeo and Paradise. The specially designed packaging had our “Game of Thrones”-inspired photo digitally printed onto the box. Olivia and I are excited to plan more events in the near future.

At the Cocoon event, lovebirds Conrad Onglao and Zsa Zsa Padilla were seen chatting with Tita Virgie and PR grand dame Susan Joven. Love is surely in the air these days as new romances are happening everywhere.

The private spaces of some the country’s leading architects, designers, real estate developers and artists are featured in the Cocoon collection. Homes of Kenneth Cobonpue, Ed Calma and Manny Minana are part of the book, as well as the condos of Onglao and Ito Kish, to name a few.

Design on the tube

More homes and real estate properties are featured in the new season of “Philippine Realty TV” airing tonight on ANC. The Philippines’ first and longest-running real estate and construction TV show for Filipinos worldwide is hosted by Gabe Mercado and Angel Jacob.
This season, I join the two hosts and cover the interior design features.

“Philippine Realty TV” is the pioneering TV show that features the best real estate development projects across the country, and showcases various suppliers for home building and interior design. It is also the first local TV show that has built concept homes from the ground up, and is the ultimate aspirational show for people looking to buy or build their dream home—whether they want to invest in a condo, house and lot, or second home.”

Wilcon Depot, the country’s leading construction and building megastore, recently gave away its second brand-new car to a female customer from Quezon City.

As a Wilcon brand ambassador, I drew some of the minor prizes that afternoon.

Rosemarie Ong, Wilcon’s SEVP and COO, expressed the company’s gratefulness for the continuous trust and support of its Filipino customers. The “Dream Big and Win Big Promo” is set to give away three more luxury cars and 60 sets of Wilcon Gift Certificates on three separate raffle draws. The promo runs until Dec. 30 at all Wilcon stores nationwide. Next draw is scheduled on Sept. 8.