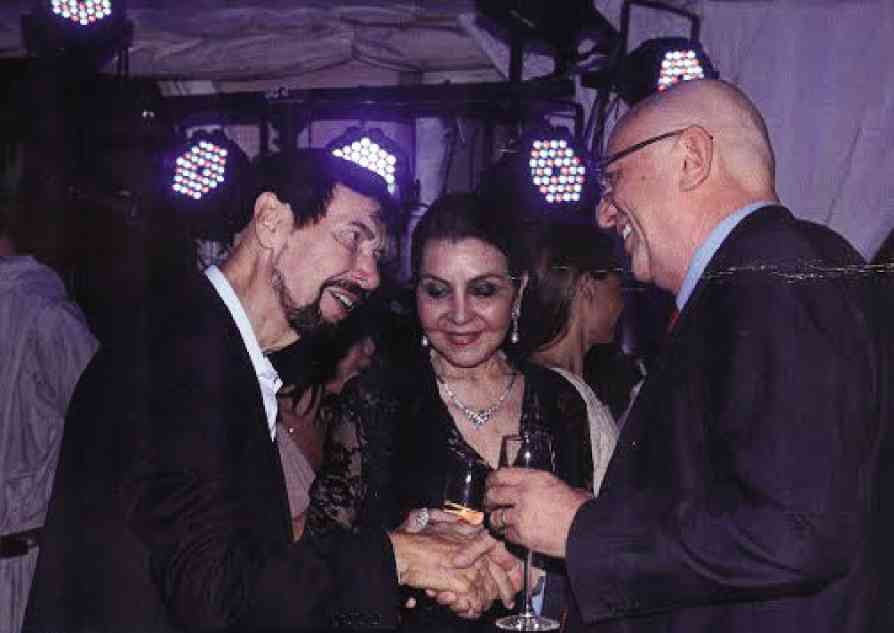 HONORARY Consul of France in the Visayas Michel Lhuillier and wife Amparito welcome Hughes Antoine Suin, First Counselor of the French Embassy, to the Bastille Day celebration in Cebu.

THE NATIONAL Day of France was celebrated in Cebu on July 18 with a grand reception hosted by the Honorary Consul of France and Mme. Michel Lhuillier. Venue was La Maison Rose, home to the Alliance Francaise de Cebu.

Invitations said attire requested was smart casual but nonetheless it was a brilliantly dressy affair. Amparito Llamas Lhuillier set the tone, clad in black Chantilly lace with the signature of daughter Monique. A riviere of diamonds sparkled from her neck.

Here for the occasion was Hughes Antoine Suin, first counselor of the French Embassy, in place of Ambassador Gilles Garachon. He was in Manila with the foreign minister discussing the state visit to France of President Aquino come Sept. 18.

Toasts were made by Messieurs Suin and Lhuillier to the continued friendship and further enhanced relations between the Philippines and France. A message on behalf of Cebu Gov. Hilario Davide III was delivered by provincial board member Raul Alcoseba.

Alliance Francaise de Cebu director Louis Thevenin made sure everything was in perfect order. He was ably assisted by his wife Honeylet Samia Thevenin, who manages the restaurant of La Maison Rose ever so efficiently.

The Interact Band was there to play dance music beneath a tent all the way up to midnight, by which time a DJ took over to dish out more dance music till the break of dawn or more like, say, 4 or 5 a.m., the perfect hours to munch croissants at nearby La Vie Parisienne.

Seen among the prominent guests were Remy and Shella Rault. He is a French painter of note who has made Cebu his second home. Last year he was instrumental in bringing Cebuano painters from the Mugna group to Paris.

The Cebu painters were warmly welcomed by Frederic de Beauvoir, director of Le 100 (Le Cent), the art center at the 12th arrondissement in the city of Paris. It sponsored the exhibit and residency of the Cebuano painters for a whole month in France.

There was also valued support from the Philippine Embassy in Paris through Vice Consul Andre Peter Estanislao.

This year, in November, it is Cebu’s turn to host the French artists who interacted with the Cebuano painters from the Mugna group. Six are coming from Paris: Claire-James Dupain, Maite Soler, Damien Serban, Cyril Rouge-Golemfabrik, Jean Jerome and Sophie.

It will be interesting to see the paintings the Cebuanos were inspired to produce while in and after their Paris experience.

Aside from paintings in varied styles, the exhibit will also feature sculptures, photographs, installations, video art and other innovative media.

This art event of the first water in brought to Cebu by Alliance Francaise and its corporate partners through the efforts of its director Louis Thevenin and trustee Marlinda Angbetic Tan.

Last Monday, the Mugna group with Palmy Pe Tudtud at the forefront attended a meeting to present the project to acting Cebu City Mayor Edgardo Labella, chair of the city’s Cultural and Historical Affairs Commission.