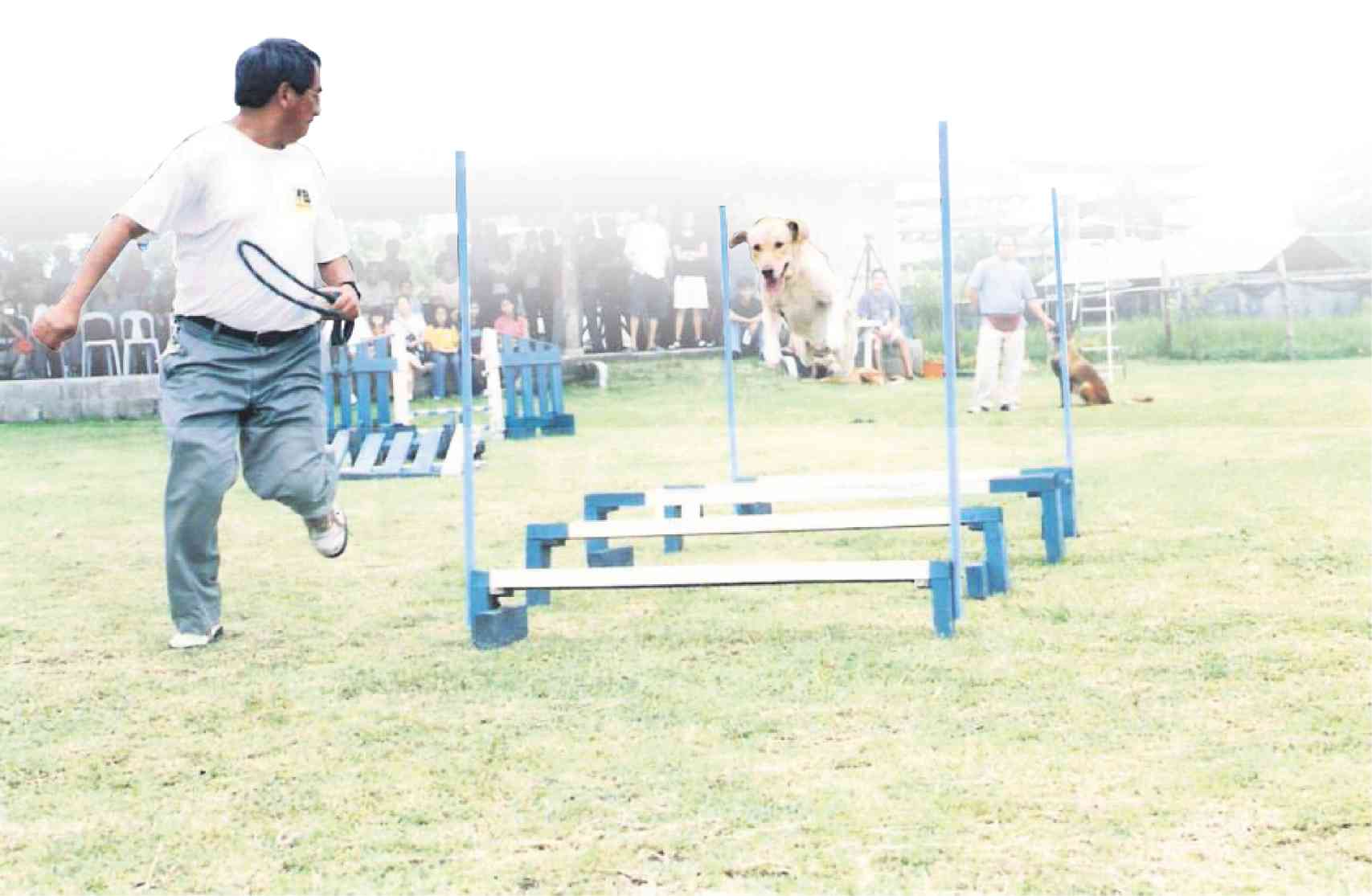 COMPETING with Kim in the early days

There’s taking your dog for a lazy, boring walk. And then, there’s dog agility.

Watching a trained Border Collie, Shetland Sheepdog or, yes, even a sleek, compact asPin (asong Pinoy or native breed) take on the various obstacles in a dog agility course—negotiating a dog walk, gingerly finding his balance on a seesaw, streaking through a tunnel or weaving gracefully between poles at high speed—is enough to make spectators gasp in delight.

The coordination between the dog and the handler, who runs the dog through the minute-long course, is a study in absolute teamwork between man and animal.

Unknown to many, several Filipino dog trainers, many of them self-taught, have been doing dog agility since the 1970s—and it all started not in Manila, but in the wide open fields and tree-lined spaces of Bacolod.

At the 4th Cebu Dog Agility Cup organized by the Philippine Dog Athletics Association (PDAA) in Cebu last May 23-25, participants stopped in the middle of competitions to surprise 74-year-old Donato “Donnie” Poblador with a PDAA Lifetime Achievement Award for being the “Father of Dog Agility” in the Philippines.

The Donato Poblador Agility Cup in his honor, to be held every year starting 2015, was also launched.

The amiable Poblador responded by clarifying that he did not “father” any of his colleagues, much to the amusement of the audience and members of the close-knit dog agility community.

Dog agility started in the late 1970s, with exhibition runs held at the Crufts Dog Show in England that were based on horse jumping courses. Today, it is a recognized international dog sport.

“Our local scene is very healthy,” Poblador said during a recent visit to Manila. “In the US, of course, they have thousands of competing dogs, while we have only about 500. But that’s better than when we started in 2005, when we had zero.”

Poblador, a successful businessman, grew up with dogs; he still remembers his first one, an asPin named Pooch, who used to wait for him every time he arrived from school in the sixth grade. He began training dogs for obedience and personal protection in the ’70s, learning from his uncle, Romeo Ledesma, a sugar farmer.

“I was amazed that he could order dogs around. I became his student, and every Sunday I would go to his farm,” said Poblador.

Like most early trainers who learned from other people, books and DVDs, Poblador first practiced what was called the coercive method, which basically involved scaring a dog into obedience with threats of pain.

It’s still used by some commercial dog trainers because it yields faster results; but with more enlightened trainers now looking out for the dog’s benefit and animal welfare advocates keeping watch, it’s given way to the more popular positive reinforcement system.

“I’ve learned there’s a big difference between what I used to do and what they do now,” Poblador noted. “In the old way, we would use a lot of choke collars, practically strangling the animal. But this was how they did it from before World War II until the ’70s, when the new science came out.

“It worked at the time, but the big difference was, you had a dog who would sit because he wanted to avoid pain. Now, you have one who sits gladly because he will get a cookie. You see that when you ask them to come, one will approach with his tail between his legs, while the other is wagging his tail!”

His businesses led to a hiatus of sorts from this hobby—until Poblador suffered a heart attack in 2002 and underwent a quadruple bypass. Before letting him return to Bacolod, Poblador’s doctor asked him what his hobbies were.

“He urged me to go back to training dogs, because it was good therapy, a stress reliever,” he said.

Poblador’s brother gave him a yellow Labrador puppy named Kim, who was trained for agility, protection and even bomb-sniffing using positive reinforcement. Kim would become his bodyguard and constant companion, and would be among the first dog agility competitors in the country.

After seeing film clips of dog agility, Poblador invited his fellow dog training hobbyists for merienda (snacks), had a carpenter construct some obstacles and tunnels from drums, and started what would become the K9 Obedience Club of Negros.

The group eventually learned that dogs were also jumping in General Santos City, thanks to the efforts of Francisco “Tito” Santos.

“We started calling each other up, and Tito invited us to GenSan in 2005, when they had a show for trainers,” Poblador recalled. “People liked it, so I invited them the following year to Bacolod.”

Poblador noted that his group was fortunate to find a champion in then Negros Occidental Gov. Joseph Marañon, who invited them to demonstrate the sport at the Panaag Festival in Bacolod.

A total of 17 dogs, four from GenSan and 13 from Bacolod, Poblador’s Kim among them, wowed a crowd of 8,000 in a football stadium.

“That’s when we started getting really serious,” he said.

Governor Marañon would further sponsor tickets to fly United States Dog Agility Association (USDAA) president Kenneth Tatsch to Bacolod, first to explain dog agility to the trainers, and later to certify judges and professionalize the sport. This was how Poblador was found by Manila-based trainer and now PDAA president Jojo Isorena, who had just returned from dog behavior studies in the US, and was looking for local dog agility groups.

“Nobody in Manila was doing it,” Isorena said.

He recognized Poblador immediately the first time they met.

“Have we met before?” Poblador asked.

“No, but don’t you know you’re famous?” Isorena countered.

For Poblador, dog agility is a lot more fun than other events, like dog shows.

“It’s one of the best ways for a dog and his owner to bond. It’s a sport that the dog enjoys; he can go to town! He’s happy! It’s exercise for the handler, too, as you’re forced to run,” he said.

Also, unlike other events that require pedigrees for the animals, “in dog agility, we don’t care, as long as the dog is healthy.”

To excel in agility, a dog must be playful and intelligent, and a good handler, more than anything, should know his dog.

The Filipinos must be doing something right, as the PDAA has been invited to field three teams (a team is one dog and one handler) in the USDAA Cynosport event in Morgan Hill, California, in October.

Poblador laughingly admitted that his own five children never got into serious training in spite of their love for dogs. But his grandchildren are showing more promise; his 19-year-old grandson Nikko competed in Cebu, and recently acquired a puppy.

Poblador’s beloved Kim passed away in November 2013 at the age of 12½, and his family has gifted him with another yellow Labrador, Kim 2.

“Before I got my award from the PDAA, my family was always telling me, ‘At your age, with your health issues, why do you still insist on going to these events?’” Poblador said. “When they gave me the award, all the questions stopped! Now, they say, ‘We’re proud of you, go!’”