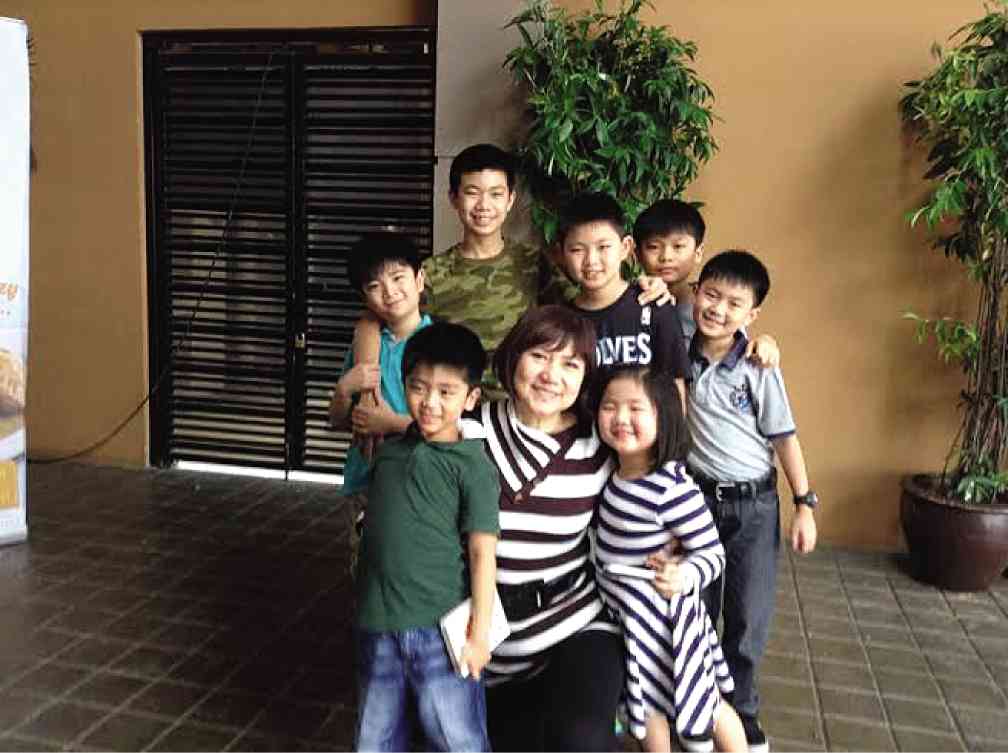 MYRNA Yao with her grandchildren during their weekly Sunday breakfasts

Woman behind ‘Barbie’ didn’t exactly have a dream childhood

If you were a child of the 1980s and fond of Barbie dolls, you would probably remember the Barbie commercials. A promotion or contest would entice you to mail something to an address in Quezon City; I had memorized it, given the number of times I joined and tried my luck. There was even a hotline you could call and which Barbie would “answer.”  (It was a prerecorded message.)

As founder of Richprime Global, Inc., the local distributor of Barbie and other well-loved children’s toys (Disney Princesses, Hot Wheels, Fisher Price and Chicco), Myrna Yao has revolutionized the toy and children’s market.

However, success did not come easily to the young woman from Daet, Camarines Norte. At  age 10, Myrna was sent by her parents to Manila with her 11-year-old sister. The two stayed in a dormitory as students of St. Stephen, an American missionary Chinese school. With no one to look after them, Myrna took it upon herself to manage the monthly allowance her parents sent.

She would go to the market and to Divisoria to buy food and other supplies. During long breaks, the two sisters would take the train back home to visit the family.

In college, she was a working student—a secretary to Asia World’s Tan Yu and a business management student, major in marketing, at the University of the East.

She got married at 19 but did not quit school; and upon graduation, she worked for her MBA. She earned it a month before she gave birth to Liza.

Long used to multitasking, Myrna took on work commitments and entrepreneurial ventures—from  her clan’s copra business to her own buy-and-sell business—while raising a family.

Even with older siblings around, Myrna took on many responsibilities for her family, so she used to ask her mother: “Why is it always me?”

Her mother’s simple answer: “Ikaw lagi ang nakikinig, eh! (It’s always you who can be told what to do.)”

In time, it made sense, she said. “It’s true! But you know, you learn more when you do things from listening. You gain experience and you become braver and more courageous because you have already done many things.”

Eventually, she got the distributorship of Goodyear tires in Quezon City. Despite the recession, hers became the multinational’s biggest local distributor in two years. But she loved more challenges: “You have to keep growing, or you will regress.”

Given her love for children, she focused on toys. Back then, there were hardly any toys on the market. “They were banned because they were considered ‘luxury’ items, so what was available were those brought in by viajeras. When the government finally did allow toy importation, these were taxed so heavily. It was something like 50 percent!”

To find a way around the strict laws, Myrna searched for a company with a plant in the Philippines. At that time, Mattel had a factory in the country but did not want to partner with a local distributor.

After two years, however, Mattel decided it was time to have a local distributor and gave Myrna a chance.

But she was not the only choice. Big department stores were also interested in Mattel. Not one to be intimidated, Myrna turned the situation around and reminded Mattel that having no store meant she could sell to all the stores. And unlike the big stores, “I went there myself. They sent only their managers.

I could commit right there and close the deal.”

And close the deal she did.

She soon realized that was only the start of more challenges: “On our first day, nobody wanted to buy! They told us to come back at Christmas! Back then, toys were just one rack in a store. They also said that they were too expensive…”

Myrna was upset every time her salesmen would come back empty-handed. “I told them, ‘You allowed [the stores] to convince you, instead of the other way around.’ I spent an entire day training them. They went out and tried again.”

Her staff got orders for two to three pieces.

Back then, there was no market for toys. But she persisted: “I was used to difficulty. It never stopped me. I would go out and talk to the owners myself. I was the first official distributor, and also became the first company, to advertise toys on TV.”

While Myrna ran her businesses, she was also busy raising her four daughters. She seamlessly fused her career and family life by getting her children involved. “Every Christmas, we would be at Philcite on Roxas Boulevard, selling toys in that big bazaar,” daughter Liza recalled.

I told Liza what a dream childhood she must have had—to have access to all the latest toys. But she said that wasn’t the case: “I remember having only three dolls because I would get one if I earned first honors in school. And even then, I had to choose and get only one—either the doll, its accessory or its outfit.”

“They had to work hard for the toys,” Myrna said. “They should not get things so easily. I always used to tell them that I’m so busy and tired working… but I’ll be happy if they get a medal because it will mean that they are also working hard for mommy.”

Liza recalled: “Every summer, beginning at age 8 when I was in grade 2, I would work as my mom’s secretary. I used to type all her papers. Other times, I would be in the warehouse, cleaning or tagging items. Even while I was at Wharton School University of Pennsylvania for college, mom would encourage me to take the train to New York for the toy fair every February, just for exposure. This is what we also do with our kids now.”

Myrna said, “I always took them abroad for my meetings. My only condition was that they should know how to wash their underwear.”

As a mother, Myrna would give test her children from time to time to see how they would react to situations. “Once, I saw Liza trying to reach a high sink to wash her things but she could not reach it. I wondered what she would do and didn’t say anything, but she solved her own problem by getting my high heels and standing in them.”

Myrna added that “it’s not good to overprotect children. Sometimes the problem is, when you try to teach them about independence, they answer back because they have their own ideas. To a mom, this is painful, but do you choose a child who’s always dependent and listening to you, or an independent and a good thinker?”

For this reason, Myrna had to learn to step back and let her children make mistakes: “Don’t get mad when they make mistakes, so that they don’t get scared to tell you when they do something wrong. Getting mad only makes them fearful and keep secrets from you.”

Her mind was focused on her kids’ future: “Future competition is tough. They should be able to face the world and not always be subservient to the parent…”

So far, Myrna’s formula has been effective. Liza, a finance major, worked in a bank for a few years and eventually joined Richprime, where she used her educational background to upgrade the company’s investments and make sound financial decisions.

Mother and daughter have been working together for the last 16 years, and they continue to enjoy the work and each other’s company. Every Sunday, without fail, Myrna has a breakfast date with all her seven grandchildren—the parents’ attendance optional.

Just like she did with her own children, she observes each grandchild, watching out for their strengths. She reminds them that if they “love what they do, and do it with passion, they will excel in whatever work they get into.”

It has also become a family tradition to bring one grandchild with her on work trips abroad once he or she turns 10.

She doesn’t pressure the grandchildren to join the company: “My way of doing things is not through pushing. I let my children and grandchildren take the opportunities as they want to.”

But, unlike with her children, Myrna showers her grandchildren with whatever they want among her products. Perhaps she believes that now she can afford to splurge, that she can count on the fact that her daughters are trying to instill the value of discipline, too, among her grandchildren. She can count on the belief that her capacity for hard work is already a legacy for the next generation.