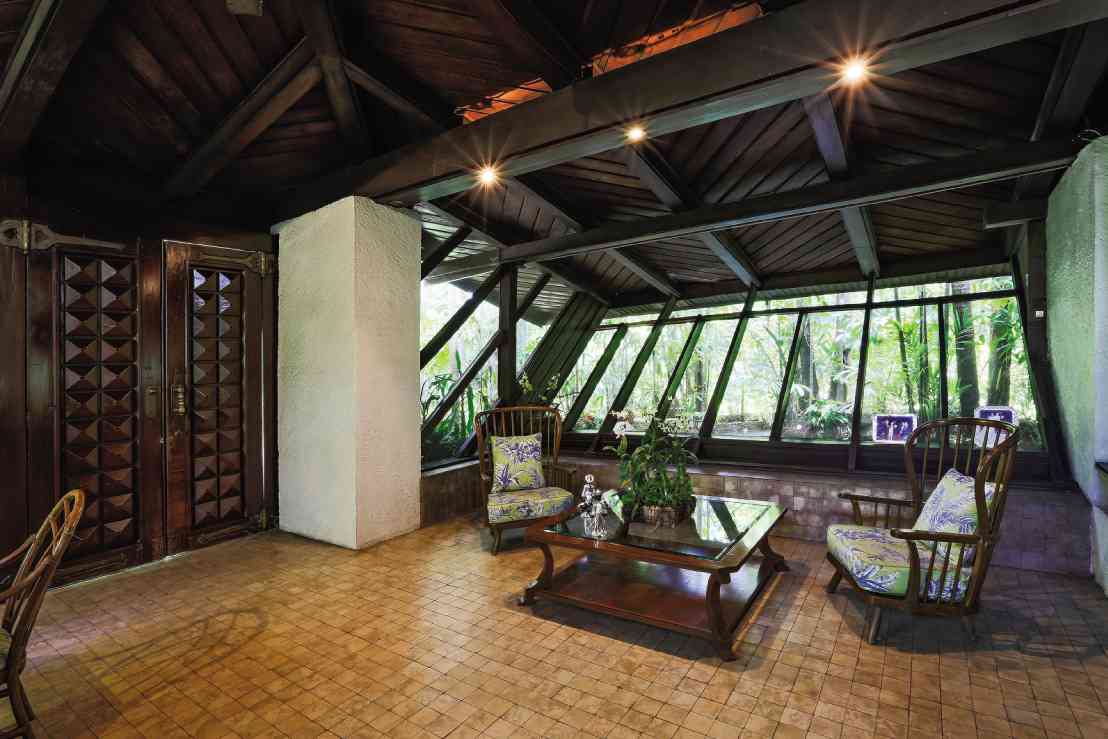 “THE HOUSE is not about the luxury of materials. The luxury is the space surrounded by greenery. You can look at it artistically as a confluence of planes,” says Galicia. PHOTOS BY PJ ENRIQUEZ

The sunbean falls across the pond, touching the surface until it sparkles like metal. The gentle ripples then cast a pattern of moving silhouettes on the corner of the living room.

Outside the home of National Artist (for Architecture) Pablo Antonio, a pond serves as catch basin for rainwater. Its simple beauty soothes the senses.

“The pond out here helps to cool the air. That’s the pragmatic role. But when the water reflects the sunlight, the dappling of light on the ceiling produces a light show. That’s poetic. That is architecture at its best, the combination of the pragmatic and the poetic. It’s like the yin and yang of creation,” explains architect Dominic Galicia, adviser to the Heritage Conservation Society.

Few houses today have the capacity to evoke an emotional response while meeting the demands of contemporary lifestyle. Even fewer architects are able to use technology and modern materials to build a house with soul, so to speak.

This was one of the strengths of Antonio, who was declared national artist in 1976, a year after his death.

Antonio studied at Mapua Institute of Technology under architect Tomas Mapua. Due to lack of finances, he dropped out of school to work on the design of the Legislative Building (now the National Museum).

Impressed with Antonio’s talent, engineer Ramon Arevalo became his patron and sent him to study architecture at the University of London.

Among Antonio’s existing works are the Far Eastern University campus in Sampaloc and the Orchid Garden Suites in Vito Cruz, Manila, which both showcase Art Deco architecture; the Bel-Air and Syquia Apartments, also in Manila; and the main lounge of Manila Polo Club.

Antonio’s residence on Zamora Street in Pasay City was declared by then President Arroyo an architectural legacy from a national artist. The bungalow was built in 1948, reflecting the mid-century modern architecture philosophy of “less is more.”

The discreet color palette, clean lines and expansive picture windows direct one’s gaze to the views; the exterior was built of concrete painted in cream with a textured finish; and the roof consists of a succession of multiple volumes partly covering each other.

Galicia points out that Antonio designed a pattern of circulation that made the house very appealing: “It’s a house of a shy man. From outside, it’s very low-key.”

The bungalow doesn’t expose itself in its entirety. One is initially greeted by a lush garden around the circular driveway. After the bend, a portion of the house is revealed.

“You just see a blank wall, which isn’t about the wall, but the greenery in front of it. The wall is an opportunity to frame the solid, fortress-like door,” says Galicia, referring to how the house seamlessly blends with the landscape.

The beveled door, with its dramatic bronze orb knobs, tells us that it was built in the mid-century style.

“The house is a synthesis of Filipino architecture with international influences. Antonio admired Frank Lloyd Wright, but he had his own take and created an architecture that was a response to the tropical environment,” says Galicia.

Landscaped grounds, foliage-lined roads and ponds were characteristic of Wright’s general architectural composition. The scenery was part of that architectural allure.

Like Wright, Antonio skillfully controlled interior spaces, making a room seem larger. Upon entrance, the visitor is impressed with the prodigious scale and proportion of the interior space. This design echoes the modern lifestyle after the war.

“Although the house looks modest from the outside, when you open the door, the reticence outside is replaced by this fantastic burst of space overlooking the garden. As an architect, I respond to this space with great excitement,” says Galicia.

The expansive open plan is characterized by angled windows and wide ledges that wrap around the entire space. “This place reminds me of Frank Lloyd Wright’s home, Taliesin West, in Arizona. The space was built for people to sit down. You get the sense of that here, at the edge of the room, where there are window seats,” says Galicia.

He adds that the space and layout are dynamic. The landscape and the spatial experience seem to change constantly as the visitor walks around. The angled screened windows, devoid of glass (that will consequently produce heat), command views of the jungle. Galicia points out that the surrounding angled windows provided cross-ventilation for a cooling effect and modulated the sunlight. Yet, there are oversized eaves to protect the house from the elements.

“A relationship between indoors and outdoors tells you that you are in the tropics. As a climatic response, there are indoor gardens for air to come in and screened skylights for air to escape,” he says.

It lends itself to warmth and intimacy with the embracing window ledges and tropical plants.

The architectural simplicity relies on natural light to lend character. The embellishments are the interplay of chevron and vertical patterns and the various lengths of wood on the ceiling.

The subtle tones of the wood, concrete walls and cut marble flooring allow the furnishing to take the forefront. The house is decorated with Ernest Cornell’s furniture, which is as old as the house, and other rattan furniture.

Like Wright, Antonio made the extension seem larger by obliging visitors to pass through a narrow corridor, and surprising them with a generous space at the end of their course. “The house grew to accommodate the needs of the family. It has an informal layout to allow organic growth,” observes Galicia.

The extension accommodates the former bedroom of Antonio’s late wife, Marina, and the dining area. While Antonio used mostly rough concrete, a technique common in mid-century architecture, he played around with bricks in the extension. Galicia points out that Antonio experimented in his house by exposing the brick joints and layering them in successions to create a pattern.

Although the house was inherited by Antonio’s children, it was designer and caterer Malu Veloso, the eldest of the six siblings, who fought desperately to keep the memory of her father alive. At one time, it was in danger of being neglected and sold to interested parties.

Every Thursday, she hosts a hearty lunch for people to experience the place. Without any website, people learn about the heritage house-cum-private dining on Zamora Street through blogs.

“Being moved by a place is an important experience. It edifies and helps enlightens the person. Not many places do that to you. This house carries wisdom and light,” says Galicia. “As a national artist, Antonio distilled what the world had to offer and expressed it in his Filipino way… It’s so important that this house remains as it is for as long as it can.”