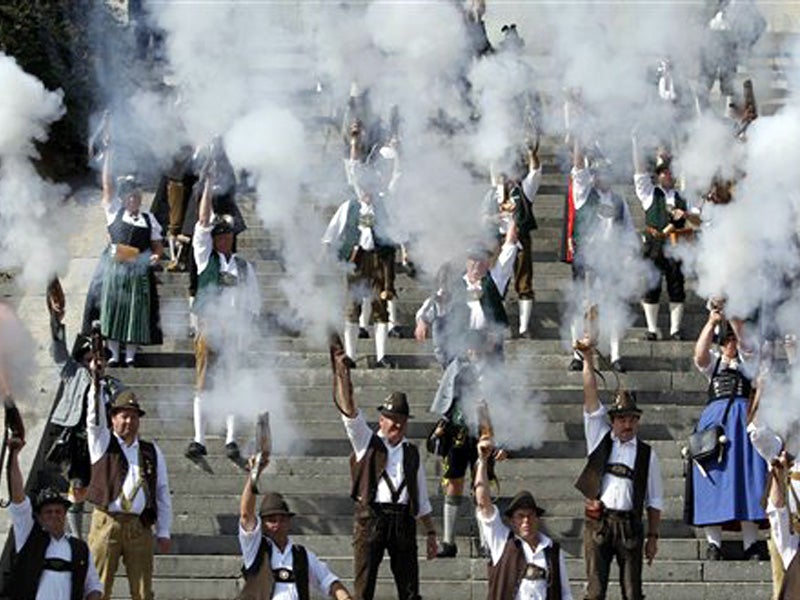 OKTOBERFEST Bavarian riflemen and women in traditional costumes fire their muzzle loaders in front of the “Bavaria” statue in Munich, southern Germany, on Monday, Oct. 3, 2011. Members of various shooting clubs of the region met for a salute on the last day of the famous Oktoberfest beer festival. AP Photo/Matthias Schrader

A total of 6.9 million visitors staggered around the cavernous beer tents in Munich, guzzling 7.5 million “steins,” liter-sized measures of the amber nectar, despite a record high price of nine euros ($12).

To soak up the beer, partygoers also consumed 118 oxen (one more than last year), 53 calves and thousands of chickens.

The Munich police also had a quieter time, being called into action 2,175 times, around 100 times fewer than last year.

There were also fewer incidents of stein glasses being used to clobber other visitors round the head and significantly fewer cases of alcohol-induced unconsciousness, authorities said.

“Happily, the upward trend of attacks with beer glasses did not continue this year,” said the police in their concluding report on the festival. There were 58 cases, compared with 62 in 2010,” the police added.

While this is the 201st anniversary of the beer fest, it is only the 178th edition, as the event was cancelled during two cholera outbreaks and World Wars I and II as well as economic and political crises.

This year’s event also had at least 11 more visitors as the Bayern Munich football stars were allowed to attend the festival after a solid start to the season.

Following a dire start to last year’s campaign, Bayern’s then coach Louis van Gaal ordered his players to attend a punitive training session instead of enjoying a few quiet beers.

Among the 4,750 items recovered at the lost-and-found office was a viking helmet, a megaphone and a pair of dentures.