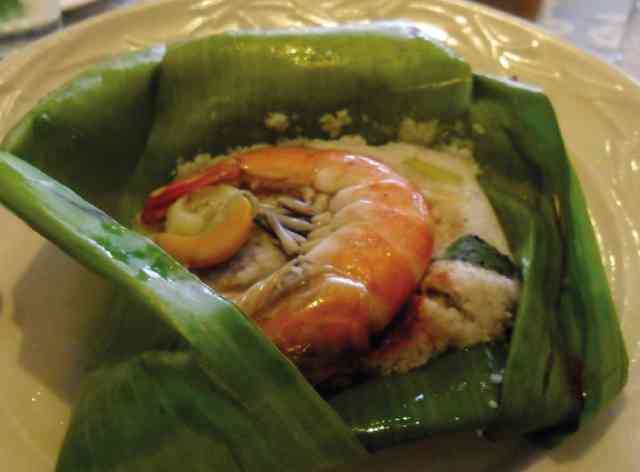 Duck from Cagayan, honey from Sorsogon, salt from Guimaras

This time it was Machiko Chiba, Japanese cooking specialist and a guest of Maritess Lopez, wife of Philippine Ambassador to Japan Manolo Lopez, who enjoyed Glenda Barretto’s version of the traditional Filipino chicken soup.

Another “aha” moment for Chiba: when the lumpiang ubod was served, the coconut heart in pouches rather than the usual spring roll, accompanying black tiger prawns and crab claws in coconut cream.

Chiba was here to demonstrate her recipes for a culinary school, similar to what she has done abroad, notably at Le Cordon Bleu in London.

She is the author of several books, and you can determine by their titles that she writes for the modern kitchen and eater: “Japanese Dishes for Wine Lovers,” for instance; and for microwave users, “The Cook-Zen Cookbook,” which uses her patented cooking pot.

Present at the dinner were the chefs of the book “Kulinarya” (Barretto, Conrad Calalang, Myrna Segismundo and Jessie Sincioco); and writers Felice Sta. Maria, Nana Ozaeta and myself.

Adobo was Chiba’s favorite; it was the sauce that evening for the Bistek Batangueño. Chiba was told stories of how the cutout of the pastillas wrappers used to be so long it reached the floor when laid out on the table, and how “latik” used as the sauce for the baked squash is made by cooking coconut milk with panocha (cooked brown sugar).

The setting for serving Filipino food can be on a formal dining table like that evening, the crystal glassware filled with well-chosen wines, the dishes on porcelain and silverware, with fresh roses as centerpiece.

But it can also be an informal table such as what we had at Purple Yam in Malate.

This restaurant owned by Romy Dorotan and Amy Besa has been creating such a buzz, mainly because Purple Yam is the couple’s Manila branch of its main site in Brooklyn, New York.

We arrived for Sunday brunch at 3 p.m., quite American in schedule; so before then I had to look as if I was having my fill of the Sunday lunch at home, our usual family time.

Yet there was family at Purple Yam, too—the Dorotans and the couple’s friends. Its location on Nakpil Street is Amy Besa’s family home; outside you can imagine that it was what most of the houses in the area must have looked like in the 1950s, before Malate became a honky-tonk town.

When the menu was shown, it made me smile because the sources of ingredients were listed as well. Amy and Romy want to bring home the point that we have so many ingredients that

need to be discovered, cooked and appreciated.

There was duck from Amancio Farm in Cagayan, which was salt-roasted and placed into pan de sal made by a young baker from Staple and Perk Bakery.

The Ligwan honey from Castilla in Sorsogon sweetened the pancake made with squash, Greek yogurt and sour cream.

The soft-boiled organic duck egg was from Victoria, Laguna, and topped the salad of greens, green mango and santol with cured tuna that looked and tasted like ham.

Salt for grating on the salad was tultul from Guimaras, a salt block that has a whole story on how it’s made and why it became plentiful in the place.

Rice that was perfect for the beef tapa and pork tocino with omelette came from the Cordilleras, said Amy. It moved the guests to enumerate their own favorite organic colored rice (black, red, yellow, brown) and the names and places where they were grown. Foodies always do that, though I hope we never get to the point where the information becomes more important than tasting the food.

Off the menu, Romy presented what he called kinagang from his home province, Sorsogon. Shrimps and scallops rested on a bed of grated buko (young coconut) and lukadon, that stage of the coconut before it becomes the mature niyog, favored for many Bicolano dishes.

The kinagang was steamed in banana leaf, though Romy said that the hagikhik leaf (Phrynium fasciculatum) is traditionally used. He was surprised when told that hagikhik is the wrapper of the suman latik (rice cake with sweetened coco milk) in Leyte, the leaf shaped into triangles.

Cochinillo was also served, already chopped, the meat in long strips with the crisp skin shorn of fat and served as is—crunchy and heavenly.

The roasted pig made the brunch celebratory, but conversation around the table between old friends and newfound friends also helped. The talk ranged from exceptional Cinemalaya movies to scandals in high places. We remembered those who could no longer share the food with us but are still top of mind.

Time passed quickly. It was sundown when we left. By the staircase that led down from the dining area, Amy reiterated what she and Romy are aiming for: support for local suppliers; for the true flavors of the food’s ingredients to come through without the aid of taste enhancers like MSG; to show foreigners and Filipinos themselves how varied and rich our cuisine is.

Because Purple Yam in Brooklyn is still open, Romy’s schedule will have him shuttling between the US and Manila. Managing both kitchens is a big task.

But then again, Amy and Romy must have planned it well, just like when they opened Cendrillon in New York, a pan-Asian restaurant that ran for 14 years.

The couple has also published the award-winning book “Memories of Philippine Kitchens” (Stewart, Tabouri and Chang, 2006).

Purple Yam Malate is open Friday and Saturday for dinner and brunch on Sunday. Contact tel. 0926-7133523 or e-mail [email protected]