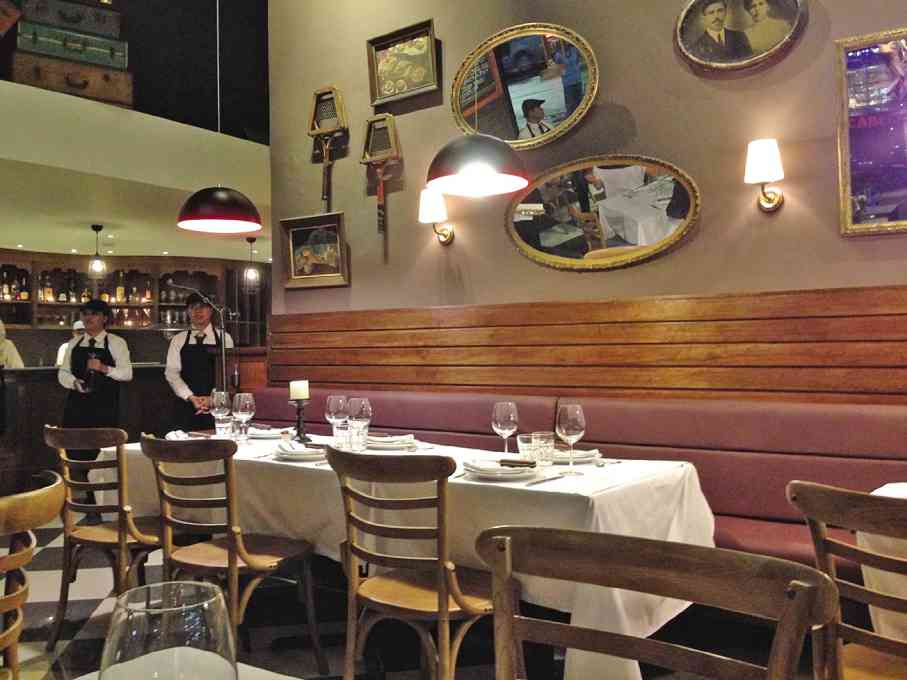 Argentine ‘parilla’ serves up a different kind of meat

Once in a while, it does happen. A new restaurant opens, there’s a lot of buzz about it, mostly good, and I go off to try it because it’s new and exciting, and the restaurant delivers. Then I write about it because I enjoy my experience and want to spread the word, and point out a few things that can be improved on.

In the dock today is the new Argentine restaurant franchise La Cabrera, which has opened a branch at 6750 Ayala Avenue, in the spot where Giraffe used to pump out music through its million-peso sound system and where denizens engaged in great debauchery. Now that we’re older and more sedate, we value a good meal more than riotous dissipation.

The space has been transformed into a palimpsest of a quaint Argentine parilla (a neighborhood grill), with old leather suitcases, musical instruments, and other bric-a-brac stuck to the wall like fridge magnets. A bit odd, but a nice change from the usual restaurant design these days.

The lamps play a neat trick in bringing down the color temperature, leaving the inner reflective surfaces a deep red, which makes the atmosphere just that bit more carnal.

There are assorted appetizers, none of which I can really recommend highly. The morcilla, or blood sausage, was highly anticipated but turned out the mushy kind, underseasoned but overspiced. But then again, this interpretation may have been simply not to my taste.

The Caesar salad was under-dressed. I generally prefer under-dressing, both in salads and when attending social occasions, but this was simply a lot of leaves, quite a generous serving, but with very little in the way of lubrication.

But one doesn’t come here for vegetables. I would recommend skipping the appetizers to make room for the main course, which comes with little dishes.

The steaks are some of the best I’ve had—perfectly cooked, liberally seasoned, and the flavor packed in tight. I had a prime rib because I like the more marbled cuts from the forequarters of the cow; the strip loin, which the others at the table had, was also tender and properly beefy but without the wobbly bits (fat and a bit of ligament, usually) that come with the rib cuts. Properly aged for the enzymes to break down some of the muscle tissue, it can be the best part of the cow, as anyone who has had a porterhouse at Peter Luger’s in Brooklyn will attest.

Since very little Argentine beef is exported, what La Cabrera sells instead is Argentina’s way of cooking meat: minimalist and noninvasive. The restaurant is coy, at least as to where the beef comes from (not Argentina, apparently).

I asked and found out that it is USDA Prime and has not been aged, even if it appears to have the concentration of flavor and firmness of a piece of meat that has at least been partially dry-aged.

Worshippers at the cult of brand-name steaks that sport fancy labels such as Angus or Wagyu will not find them here, but La Cabrera serves good beef—chosen and prepared carefully, and fired with just the right amount of heat for it to be smoky on the outside but blood red on the inside.

The sides are unlimited, and can range from starches, such as glazed baby potatoes and couscous, to mushy peas and pickled onions and olive paste. So wide is the range that you can mix them or you never have the same bite twice.

The quality varies: The pickled ones tended to be harsh and vinegary, rather than properly fermented, but most were either as is or combined with another, an ideal foil to the meat, so much so that the mustard and chimichurri sauces were left untouched.

I was not expecting a great deal from the dessert, but the panqueques, crêpes with dulce de leche inside and with a torched caramel crust, were unexpectedly good, though extremely sweet. (This is not a meal you want to have before your executive checkup.)

The biscuit version, also filled with dulce de leche, is a little less scintillating. The “volcano” is a chocolate lava cake that manages not to be molten in the middle, which makes it not really a lava cake. Sounds familiar?

Perhaps the most amazing thing about La Cabrera is that it packed a full house, with people waiting outside, and managed to run a competent service barely a week after opening. Waiters were knowledgeable about the food, orders didn’t take an eternity to arrive, and there was only one menu item not available.

I don’t believe restaurants should be judged too harshly on their service on its early days. But La Cabrera has been quite successful, and extra credit should go to the staff and management.

Now the goal is not just to keep it up but to improve as the restaurant matures. In the meantime, run, don’t walk, for a table. The venue is now a different kind of meat market from what it was when it was Giraffe. I like this one better.