Child of Light: This new computer game is a sight to behold | Lifestyle.INQ ❮ ❯ 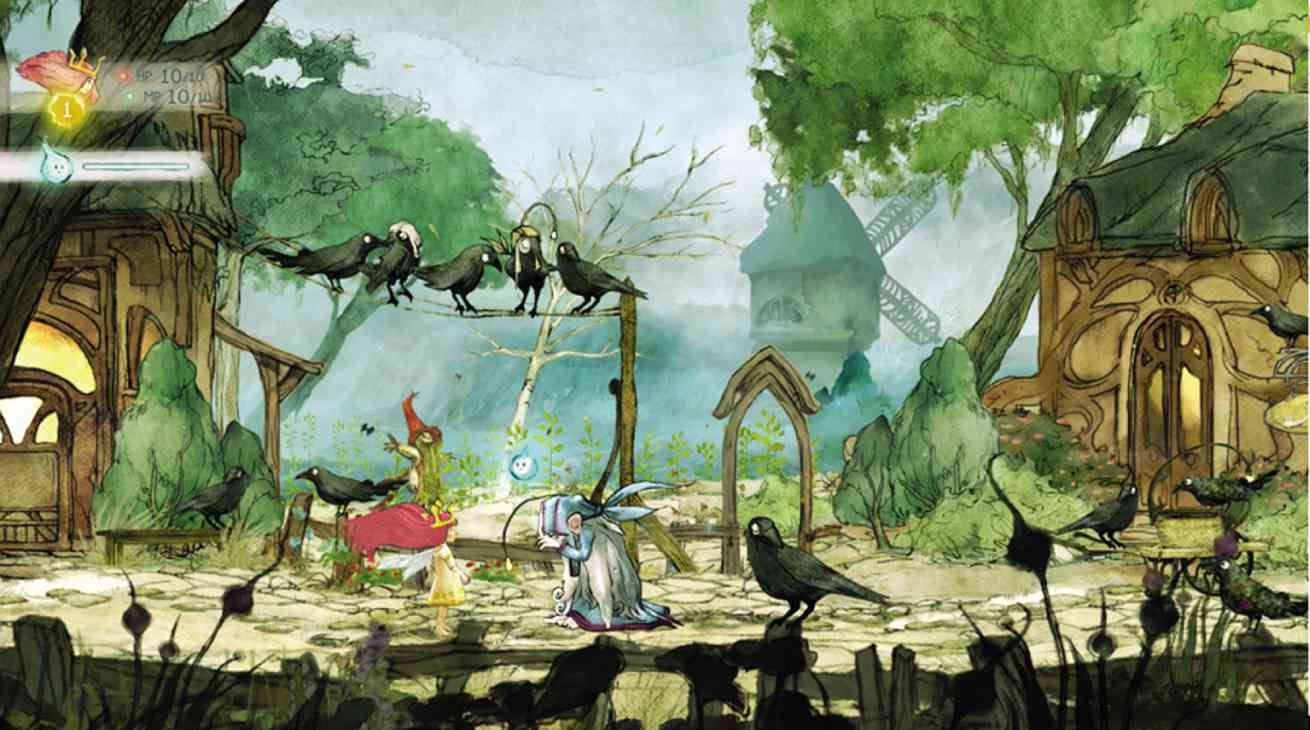 THE FIRST town Aurora visits, where all the residents have mysteriously been turned into crows

Child of Light: This new computer game is a sight to behold

Once in a while, a computer game comes along that just blows you away.

Child of Light is the type that even non-gaming folk would stop and take notice of. Developed by Ubisoft in collaboration with Cirque du Soleil, with music provided by Canadian artist Cœur de Pirate, the game is a hybrid platformer/JRPG. It puts in charge of a little girl named Aurora who suddenly finds herself in the mysterious land of Lemuria that’s equal parts beautiful and dangerous.

Trying to find her way back home, she finds herself on an epic adventure—to discover the reason why she ended up there in the first place, and her mysterious connection to it.

Along the way, she befriends a handful of characters that joins her quest—for instance, a clown left behind by her troupe for not being funny enough, and a swashbuckling mouse hoping to win the heart of a maiden.

Powered by the UbiArt graphics engine that’s also behind the most recent Rayman games, Child of Light is a sight to behold. The game is mostly in hand-drawn 2D, which only Aurora actually rendered in polygons.

Exploring Lumeria, one can’t help but be mesmerized by the creativity of the characters and the locales. From an Italian-inspired medieval town filled with business-minded mice to the insides of a giant sentient mountain, every new place you visit is more bewildering than the previous.

Backed by a soundtrack mainly comprised of soft piano, combined with the visuals, it makes the game very whimsical, like a long-forgotten fairy tale.

To add to the sense of it being a fairy tale, everything in the game is told in rhyme, from the narration to even the dialogue between characters. The script is hit and miss, but one can’t fault the writers for at least trying.

Exploring the world of Lemuria, the game is more akin to a 2D platformer, as you jump and run (and eventually fly) around the town, finding treasures, solving puzzles and choosing to avoid or engage the myriad enemies roaming around.

If you choose to engage the enemy, the game takes a more JRPG-like form in a battle system akin to Final Fantasy 7, with you and the enemies acting out commands like attack, using items, switching between characters or fleeing.

Every action requires casting time which varies in duration; and if you or the enemy are attacked while casting, the action is interrupted and you end up at the start of the time bar again.

This gives the initially simplistic battle system an added layer of strategy as you try to avoid getting interrupted by the enemy, while trying to stop enemy actions as often as you can. This is where Igniculus, a wisp-like creature you befriend at the start of the game, steps in.

During battle, Igniculus can slow enemies down and gather life and magic recovery specks of light around the screen. While exploring, he can also activate switches and help you get those out-of-reach treasure chests.

Those looking for a challenge would find that the game isn’t really all that difficult. But then again, I don’t think it caters to that crowd. I feel like it was intentional on the part of the developers because they want as many people to enjoy it as possible, casual gamers or even non-gamers.

If you take Child of Light’s different parts separately, you might say it isn’t really all that revolutionary. But putting everything together, it’s just a breathless masterpiece that proves video games can also be works of art.

Child of Light was released last April 30 and is available on the Xbox One, Xbox 360, PC, Wii U, PS3 and PS4, and coming soon to PS Vita.