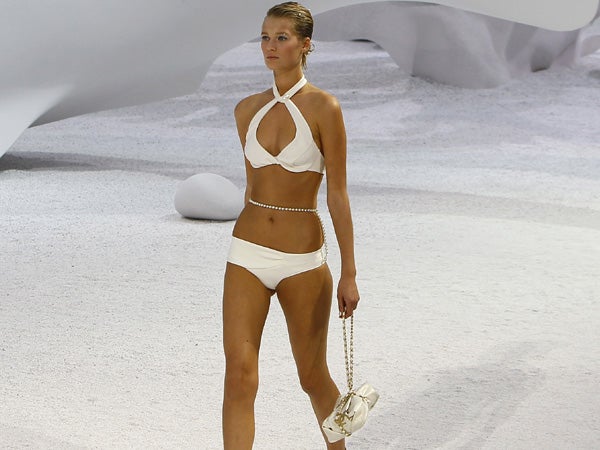 PARIS — Like a luminous Venus rising from the sea atop a half-shell, pearl-covered Chanel models in light, liquidy fabrics emerged from a giant sea anemone onto a catwalk transformed into a sprawling undersea kingdom.

Giant clumps of seaweed, sand dollars, coral and conches made from gleaming white plaster-glass were strewn across the pristine white sands of Chanel’s ocean floor runway as the luxury powerhouse, whose outrageous sets are things of legend, again upped the ante with Tuesday’s salt water-flavored spring-summer 2012 ready-to-wear show.

There was nothing literal in uber-designer Karl Lagerfeld’s take on the ocean theme: None of the clothes was covered in sailor stripes or emblazoned with kitschy red anchors. The collection was more about play of sunlight on the surface of the ocean — shine, reflection, radiance.

“I absolutely wanted to avoid mermaids and things like that,” Lagerfeld, sporting a seashell pink shirt and matching tie for the occasion, told reporters in a post-show interview.

He swapped the house’s traditional tweeds for space age fabrics shot with fiberglass and sometimes even paper, sending out little cocktail dresses and round-shouldered variations on the house’s iconic skirt suits in watery whites that glowed with highlights of coral pink and sea green. 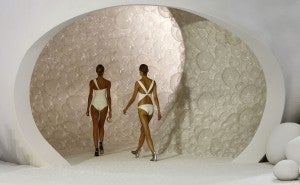 Frothy puffs of chiffon clung like sea foam to the hemlines of some of the narrow skirts, and shiny aqua ribbons zigzagged down the white shift dresses, like angry waves. A cocktail dress had puffs of slick ribbon embroidery at the sleeves and the hips, like clumps of black seaweed.

Everything was covered with pearls: They stood in for buttons and replaced chain belts, punctuated the models’ slick, wet looking hairdos and were stuck onto their ears and backs — in neat rows down their prominent vertebrae.

Ahead of the show, which attracted A-list guests including Uma Thurman, Lagerfeld himself emerged to survey his underwater kingdom, like a chic Chanel

Neptune. He hammed it up for the scrum of photographers that immediately materialized around him, pretending to strum a fish-adorned harp as the flashes popped furiously.

Like tourists at the Eiffel Tower, guests posed for snapshots on the set: Two Chinese couples dressed in head-to-toe black — the women in floor-length Chanel evening gowns, the men in tuxes with bow ties for the 10:00 a.m. show — contrasted smartly with the backdrop of gleaming white coral.

A border terrier named Frickey in an Yves Saint Laurent leopard print collar ran in excited loops around the set, sniffing at the mammoth fiberglass seashells. Thankfully, he was well-trained and didn’t dare mark his territory.