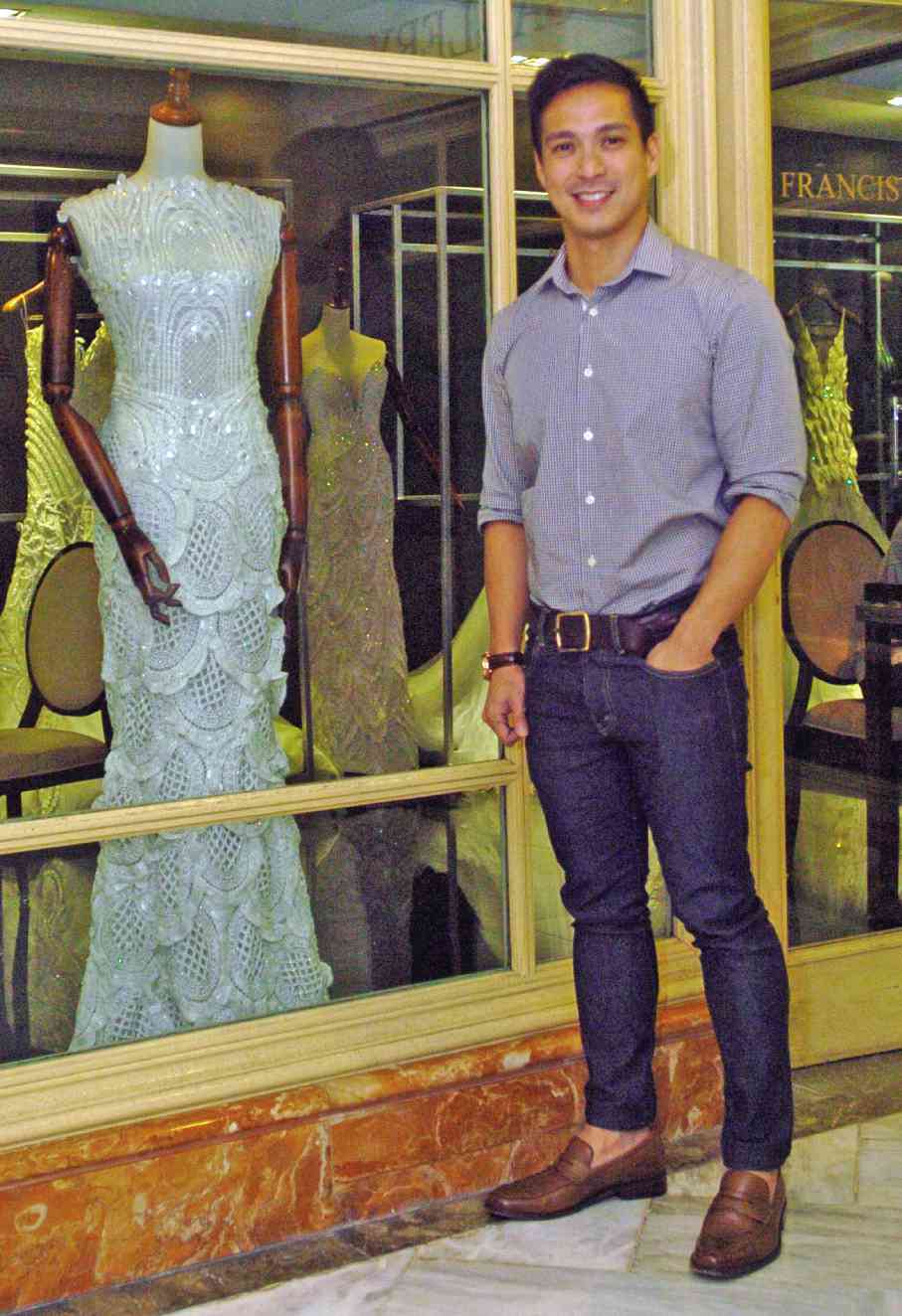 Francis Libiran continues to attend to majority of his clients in Quezon City. He has been running a production shop on Scout Fernandez Street ever since this board-certified architect turned to full-time fashion design 15 years ago with the debut of his now-defunct ready-to-wear line Njork.

But on Tuesdays and Thursdays, the designer works in Makati, in the basement of Peninsula Manila.

In October last year, Libiran and business partner Arsi Baltazar branched out to Makati to be more accessible to clients from the south.

“The traffic is terrible. That’s why they were so happy when they learned that we have expanded here,” says Libiran.

The business has grown.

Libiran’s 30 sqm Makati branch is a welcome addition to his 800 sqm Quezon City headquarters. The architect designed his Makati shop.

The unit, including a small hidden office near the entrance, underwent renovation. Libiran retained part of the office, but set aside a bigger space for his mirrored and padded-wall fitting

The only thing Libiran couldn’t touch was the show window. Peninsula Manila wouldn’t allow it. The old-fashioned windowpane look is consistent with the hotel’s other commercial spaces.

To keep the look cohesive, the designer followed the color scheme of his Quezon City shop, confined to brown, beige and black. In place of elaborately carved furniture were simple, nondescript chairs and tables.

“I’m probably one of the few designers who’s not fond of complicated furniture and flowers,” says Libiran.

Pops of color are confined to decorative skulls adorned with tiny multi-colored beads. The designer bought them on a Mexico trip.

“This big one,” he says, pointing to a multicolored skull on his round worktable, “is the mother of those two smaller ones encased in glass.”

By keeping the spare look, he focused on the shop’s real stars: Libiran’s elaborately cut, beaded and embroidered bridal gowns on hanger racks.

Set against the shop’s black wall, under custom-designed ceiling lights, Libiran’s wedding gowns are displayed like in a gallery.

“To keep the look from becoming monotonous, I change the clothes on display every month,” he says. “We have a bridal theme this month, which explains why we’re featuring wedding gowns.”

A series of mirrors creates an illusion of space. A section of the mirrored wall is actually a sliding door leading to the fitting area. Another sliding door leads to a mini office/supply room.

“I did away with a platform in the fitting room because it would look too cramped,” he says. “Obviously, there’s no room for a short runway like the one I have in Quezon City.”

Like a church aisle, the runway gives the designer an idea how his wedding gown would look on the aisle.

Libiran and Baltazar are still relishing the success of their recent show in the Canada Philippine Fashion Week in Toronto, where the designer showed a 50-piece collection on closing

“I’m able to focus on the creative side and do this much because I have Arsi and a team of wonderful people behind me,” says Libiran. “I always tell friends and clients that there won’t be a Libiran without a Baltazar.”

Baltazar, a former network executive, helped get some stars to wear Njork in those lean, early years.

The duo has big plans of turning a thriving haute couture business into a lifestyle brand.

Libiran shows us pieces from his hair accessories collection made of Swarovski crystals. He’s also finalizing a deal to market men’s and women’s timepieces under the Francis Libiran brand.