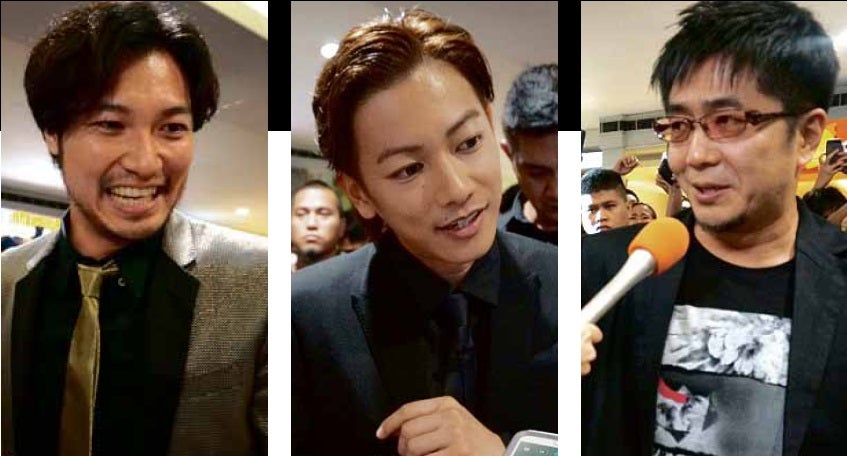 Meet the men of ‘Rurouni Kenshin’

Our head was still spinning from the lingering high after the Aug. 6 Manila premiere of “Rurouni Kenshin: Kyoto Inferno” at SM Megamall. Apparently, the main men behind the movie were in a similar state.

The only Asian stop

Having grossed over 3 billion yen (over $29 million) in Japan alone, the first installment had received such an overwhelming positive response by both RK fans and newcomers in 2012 that the Philippines was included as the only Asian stop for the sequel’s promotional tour this year.

Likewise, the Philippine release dates for “Kyoto Inferno” and “The Legend Ends” are hot on the heels of Japan’s Aug. 1 premiere, even as this Japanese film franchise has yet to have an international screening dates.

“I have the impression that the Philippines is quite similar to Japan; the people here are warm, and they easily befriend other people,” director Keishi Ohtomo said. “For this visit, I really felt that, which is why I can tell that the Filipinos have enjoyed the film.”

A fun observation was that, although the actors looked normal when not in costume, one could still see bits and pieces of their characters. While the slim, 25-year-old Satoh channeled Kenshin’s quiet confidence and boyish charm, the 6-plus-foot-tall Aoki oozed that rakish charisma Sanosuke actually possesses when he’s not beating up thugs to a bloody pulp.

In this exclusive 3-on-1 interview, we picked their brains on the pains and pressure of living up to humongous expectations, the preparation they had undergone for their roles and, for fans already familiar with how the story ends (and starts), the possibility of a sequel and a prequel detailing how Kenshin actually got his scar.

For the latter, director Ohtomo cheekily poses a challenge of “monstrous” proportions to fans who want to see more of “Rurouni Kenshin” on the big screen in the future. (Warning: there may be spoilers.)

How did you prepare yourselves physically and mentally for the role?

Takeru Satoh (TS): Three months prior to the shoot, we started rehearsing action scenes all day. Because I was able to actively practice the movements, by the time we were filming, I was already physically prepared for the role at the same level I had been in the first movie.

Munetaka Aoki (MA): I’m really thinking. (Laughter) When we were physically ready, that’s the time we started to tackle the mental part of the role. But it’s really the movements that are more important in this role, so we started with building our physicality first, because I believe that there were some emotions that I could only get from the movements or as I moved.

What and who was your favorite fight sequence and opponent in the movies?

TS: We had all these discussions with the action director, Mr. (Kenji) Tanigaki, on the main techniques, how we’re going to execute the ones that are famous in the animation. So, in “The Legend Ends,” I will be doing that move, so please look forward to it! (Laughter)

How did you deal with the pressure of bringing to life such a well-loved character?

TS: Actually, I myself love the role, and I have this inclination to not make the character look bad or not good enough, so I have a very high standard of what Kenshin should be. I had to meet my high standard to be able to portray that role.

To Aoki-san: The audience would always laugh whenever Sanosuke appeared onscreen because of his antics. Do you think your character provides some sort of comic relief in the films?

MA: (Laughs) Maybe I’m a comic relief during tense moments, but I look at it overall and how his role really expands throughout the entire movie. And going into the second and third parts, I think the staff also started to appreciate how I was approaching the role, and so they started to adjust the sets and even the little things they put on the set. Like, as you might have noticed, I eat in certain scenes so they would start putting in different kinds of food—you know, these little things—so they could also understand the kind of character I wanted to portray. Everyone was “one” in how my role was projected or defined in the movie.

What’s the most challenging part about playing Sanosuke?

To Ohtomo-sensei: There seem to be hints about the Six Comrades in the first movie, where the characters who supposedly fought under Takeda included Gein, Banjin Inui, Hyougo, and even Enishi. Are there any plans of making a sequel about the Jinchuu arc? Yes, I’m a huge fan. I’m sorry.

Keishi Ohtomo (KO): If RK becomes a huge hit again in the Philippines, I will consider doing that. If we do better than “Godzilla.”

There are short flashbacks depicting Kenshin’s past in the films; I believe Tomoe has made an appearance, although her face wasn’t shown. Will you consider making a prequel?

KO: Well, it’s a good point because that scene is very reflective of another side of Kenshin—a deeper side. His relationship with Tomoe is also reflective of who Kenshin is, so (pauses meaningfully amid laughter)…

Well, people would want to see how he got his scar.

Do you have any messages for the fans?
TS: I hope that from now on, this movie would be the starting point, the opportunity for more Japanese movies to be shown in this country, and give me more chances to visit the Philippines again.

MA: I’m very sure that Filipinos will enjoy part 2 and 3, and we hope to come back again.

KO: I hope that everyone will love the movie “Rurouni Kenshin” just like their own child, and I hope that they will nurture and make the child grow. Oh, and please make sure that they grow up to be good children!