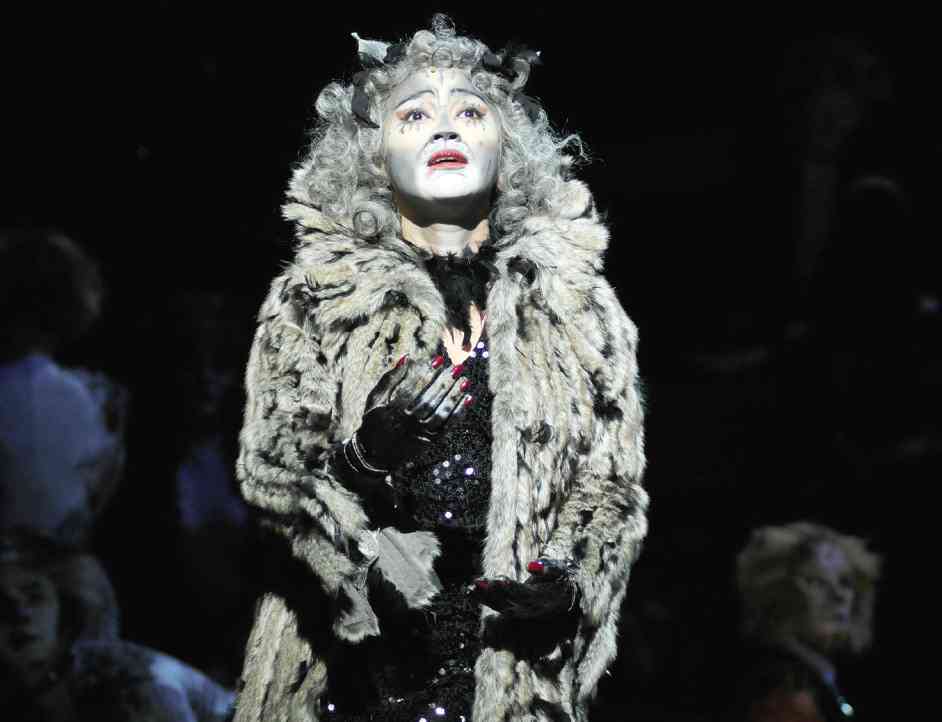 AS GRIZABELLA in a 10-month European touring production of “Cats”

For her latest project, stage actor Joanna Ampil of West End fame is going back to the basics of her craft—by taking acting lessons.

She is currently enrolled in a short course in Actor’s Studio East here in Manila, and, under the tutelage of artistic director Blake Allan, is rediscovering acting techniques by Michael Chekhov, Constantin Stanislavski and Sanford Meisner.

“[The lessons] are all about being more transparent and finding the truth in acting,” says Ampil, who began classes just last month. “Basically, [Allan] teaches you how not to be fake.”

Ampil is taking the classes in preparation for her next gig—as Candida, one of the sisters in the film adaptation of “Larawan: The Musical.” It’s her first major role in a movie.

She will be working with Rachel Alejandro, who plays her sister Paula, and Tom Rodriguez, who plays Tony Javier. Producers are singer-actor Celeste Legaspi and talent manager Girlie Rodis, who also produced the stage version of “Larawan” in 1997. Loy Arcena directs.

“Candida is the older sister. She’s a bit stern, very controlling,” says Ampil about her character. “She’s set in her ways.”

Ampil admits that she hasn’t seen the play, only the movie “The Portrait of the Artist as Filipino.”

“It was pretty daunting for me to find out that Celeste Legaspi is one of the producers [of the film], since she played the part originally. But I’m glad that she’s here, because I can ask her [about Candida].”

She has, however, familiarized herself with the music, composed by Ryan Cayabyab for the 1997 “Larawan” (he is also working on the film adaptation’s arrangements). “But he (Cayabyab) doesn’t want us to listen too much to the music, so we can do our own interpretation.”

Ampil and her “Larawan” co-actors will be singing the songs live on film, instead of recording them separately in the studio.

“This is why we wanted to get real singers,” said Rodis, who’s also Ampil’s manager.

“It’s a bit sad that we’ll have to cut some of the music,” says Ampil. “Some of the songs will have to be spoken.”

Rodis explains that cutting some of the songs is necessary because the original musical is three hours long—too long for a film. Also, they are considering their prospective audience; Rodis says they plan to bring the film to schools to reintroduce the youth one of Nick Joaquin’s great works. The movie is targeted for release next year.

Ampil has just recently returned from her 10-month European tour playing Grizabella in “Cats,” which she says she absolutely enjoyed not just because she was able to sing “Memory,” but also because of the show’s dances.

“I had never done that (dancing) before. It was the one challenge that I didn’t think I could conquer. Drama I was able to do in ‘Miss Saigon;’ comedy in ‘Avenue Q.’”

Now, aside from her acting lessons, Ampil is also busy promoting her newest self-titled album. She has gone on mall tours and is pleased that fans can sing along to her performances, particularly her first released single “Hanggang Saan.”

“The response has been overwhelming,” she says. Her album has 11 tracks, three of which are collaborative works with Martin Nievera, Mark Bautista and all-male British vocal group Blake. Her song with Nievera, titled “Never Thought I’d Ever Love This Way” was composed by Italian singer and actor Tony Renis, who also wrote “The Prayer.”

In November and December she’ll be in London for a concert with two other West End actors. The show is titled “West End Women.” “[My co-performers] are also leading ladies in West End. They’ve done roles like Elphaba in    ‘Wicked’ and Evita,” she says.

In the meantime, she is looking forward to starting rehearsals and shooting for “Larawan” soon together with the film’s whole ensemble, once they’ve finalized and coordinated their schedules. They plan to shoot on location in Taal and Intramuros.

Aside from rehearsing the songs, Ampil says Arcenas also wants to go through camera angles and what works best for each actor.

“I’m very pedantic about those kinds of things, so I’m glad to have a director who’s also like that,” she says.

And like a show biz newbie, she exclaims: “It’s surreal! I’ll be working with Ryan, Celeste and Loy—all legends!”