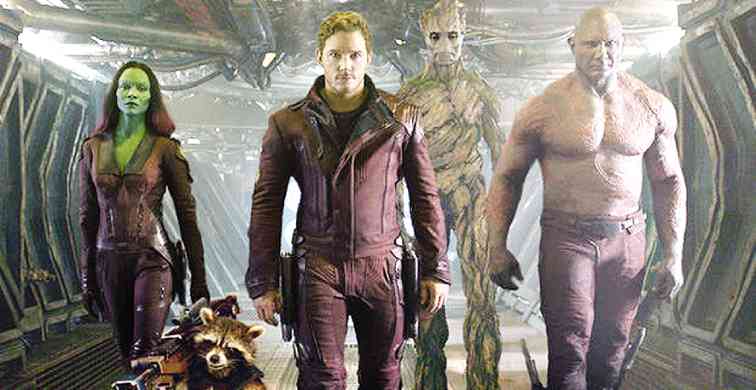 GUARDIANS OF THE GALAXY: Intergalactic fun while saving the world.

Barely a year ago, doomsday prophets were saying the end was nigh for superhero movies. Critics bemoaned the formulaic flicks, their paper-thin plots, the seizure-inducing spectacles of special effects, tough guys and gals striking poses while wearing leather in front of huge explosions. The genre was a bubble waiting to burst. People were tired of seeing the same thing over and over again.

However, Marvel Studios’ last two films actually subverted, to differing degrees, this notion. Captain America: The Winter Soldier was more like a spy flick/paranoia thriller, a slightly more colorful Bourne movie with a guy with wings. And now, along comes Guardians of the Galaxy, which harkens back to Star Wars and other space epics of yore, with tongue firmly in cheek.

What makes Guardians of the Galaxy’s success more amazing, it earned a whopping $94 million in the US in its opening week, just one million shy of Captain America 2, is you would have needed to dig through the geekiest of comic geeks prior to the movie coming out to find someone familiar with the characters.

Launched in 1969, the Guardians of the Galaxy were 31st century rebels, fighting against the alien Badoon. It was a totally different roster too, with names like Vance Astro, Martinex, Charlie-27, and Yondu comprising the first lineup. Only Yondu, the blue-skinned alien with the arrow he controls by whistling, appears in the movie.

The modern roster spun out of the comic book event Annihilation: Conquest, which had Avengers 2 baddie Ultron taking over the Kree empire. After Star-Lord successfully leads a group of misfits, including Rocket Raccoon and Groot, in what was supposed to be a suicide mission, the trio, along with several other cosmic Marvel characters, decide to stick around and become a proactive space team. That series ran for 25 issues, before getting relaunched with the cast from the movie, and is currently still ongoing.

One reason why some people feel superheroes moves will eventually die off is the supposed limit of characters that exist in the public consciousness. Sure you have your Superman, your Batman, your Spider-man, your Iron Man, but are people going to line up for B- or C-list guys, simply because they come from a comic book?

The answer to that question is “probably not,” but then, Guardians of the Galaxy didn’t put butts into seats because of its comic book source material. The trailers promised a great cast bouncing off each other, retro tunes, a walking tree, and a talking raccoon, and more than delivered.

While the basic concept of a lovable band of rogues coming together to get the McGuffin and save the universe is a time-tested plot, director James Gunn brings just the right amount of “wink wink” knowledge of the genre’s tropes (left over perhaps from his script for the movie The Specials and his previous movie Super) to avoid playing things too straight. He even takes a familiar Quentin Tarantino trick, overlaying an old-timer soundtrack over action sequences, but even goes one step further, incorporating it into the plot. In fact, Star-Lord’s mix tape provides one of the movie’s most heartfelt moments, near the climax.

Guardians of the Galaxy is not without its faults though. Ronan the Accuser is the latest Marvel villain to have not much of a motivation beyond “I’m bad, deal with it.” We’re never quite sure why he has such a mad-on for the planet Xandar, but it’s a nit that’s easy to overlook while you’re in the theater. It also has one of the most frustrating after-credits scenes that you should feel free to skip unless you’re the hardest of the hardcore Marvel fans (like even more hardcore than someone who knew who the Guardians of the Galaxy were pre-movie).

But that’s all small stuff compared to the frenetic and fun feel of the whole movie. Just like how Star-Lord assembles his merry band of misfits and put together a last-second Hail  Mary to save the galaxy, Guardians of the Galaxy shows how sometimes the whole can be greater than the sum of its parts. A superhero movie doesn’t need to be based on a big name character, doesn’t need a star-studded cast, doesn’t need a multi-awarded director, to be an entertaining smash. It just needs to be a good movie. And with Marvel moving forward on projects like Doctor Strange, The Inhumans, and Ant-Man, in addition to Captain America 3, Thor 3 and Avengers 2, that’s more than likely a lesson they’ll be keeping in mind.