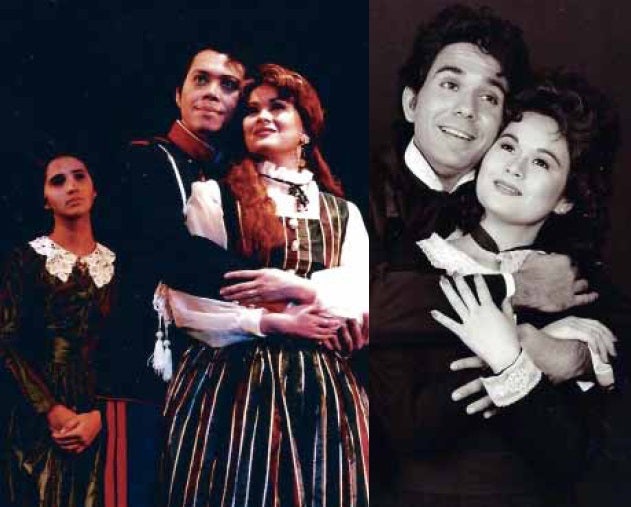 Singer Mark Bautista has been cast in the role of Ferdinand Marcos for the West End staging of “Here Lies Love,” a musical about the life of Imelda Marcos.

The production is scheduled to begin previews on Sept. 30 and will officially open in October at Dorfman Theatre (formerly Cottesloe Theatre) in the National Theatre building.

This follows the casting of Rachelle Ann Go as Gigi in the West End revival of “Miss Saigon,” along with Julia Abueva and Tanya Manalang as alternates for Kim.

Created by musician David Byrne and DJ/music producer Norman “Fatboy Slim” Cook, the show premiered Off-Broadway last year and had a limited run. It won the 2013 Obie Award for Music and Lyrics and is showing again in New York this year, with New York-based Jose Llana reprising his role as Ferdinand Marcos.

Macuja’s audition process started in May with the casting directors in the UK.

“I was called back six times, learning several songs and dialogue. When the American team came, I was called in three more times with a lot more dancing auditions until the final decisions were made,” she says.

“It was very tough and hard going. Nakakanerbiyos sobra! As we were up against so many talented people not only from the UK but all over the world.

“I got a call from my agent and found out I was being offered the role of Estrella the day after the final auditions. I screamed for joy. Yes, singers are allowed to scream!” she says.

“After having the opportunity to perform the roles of Vietnamese Gigi and American Ellen in ‘Miss Saigon,’ then South African Nala in ‘The Lion King’ here in the West End, initially it felt a bit surreal to be singing as a Filipina about the Philippines here in the UK! What an honor! It makes me feel so proud!

“I think this is a fantastic opportunity to share something about Philippine history to the entire world,” she says.

Macuja won the Solo Voice Category of the 1993 National Music Competitions for Young Artists of the Philippines (Namcya) and was with Rep in the  ‘90s, playing roles such as Mary Magdalene in “Jesus Christ Superstar,” Cosette in “Les Miserables” and Luisa in “The Fantastiks.”

“I felt I needed to spread my wings abroad and the opportunity came for me to study,” she says. She moved to London in 1997 to take a one-year post-graduate course in Musical Theatre at Mountview Academy of Theatre Arts.

She then joined “Miss Saigon” for a year and then Walt Disney Theatrical’s “The Lion King” until 2004, the same year she married violinist and conductor Robert Atchison.

“Since leaving ‘The Lion King,’ motherhood has kept me very busy. I have two children and the lifestyle here in England is very different from the Philippines, especially when you don’t have family around to help. We have no yayas,” she says.

Nonetheless, you can’t keep a performer down for too long. She’s formed a singing trio, called West End Mamas (westendmamas.com), together with Cez Campos-Bonner and Maya Barredo-Duffy (both of whom have played Kim in “Miss Saigon”).

The group performs in various London events and was in Manila earlier this year to perform in Ballet Manila’s “Heart 2 Heart” and was in last year’s “Ballets and Ballads.”

She has also been doing some film work and is head of vocal coaching at Grosvenor School of Performing Arts.

Macuja has already started preparing for her role even before rehearsals begin.

“I have been researching and reading up on the life of Imelda. For me, whether you are portraying a fictitious character or a real one, the biggest challenge is making a character come alive given all the material you have. With Estrella, I have been told she is meant to be Imelda’s ‘rock’… the one that just tells the truth as it was, which Imelda eventually rejects. I feel this is much more exciting because this all actually happened!”

“I have been keeping my voice in shape by doing vocal exercises as much as I can. I have also been taking regular ballet class as there is going to be a lot of dancing in the show. I am the singer, my sister is the dancer!” she adds, laughing.

“Martial Law was a very difficult time for a lot of people, including my father Cesar Macuja, who served in the Marcos government as deputy prime minister as well as undersecretary of trade, among his many other positions in government.  He was the first high-ranking government official to resign from the Marcos government before the 1986 Edsa revolution.

“When I told him I got the part, he said he was happy for me, but that it is a time in his life he would rather forget. I hope he comes to see me in ‘Here Lies Love’ in London. I have always admired his courage to fight for what he believed in. We must not forget that there were also good and honest people during that time. My father fought for five years and won all cases brought against him.”