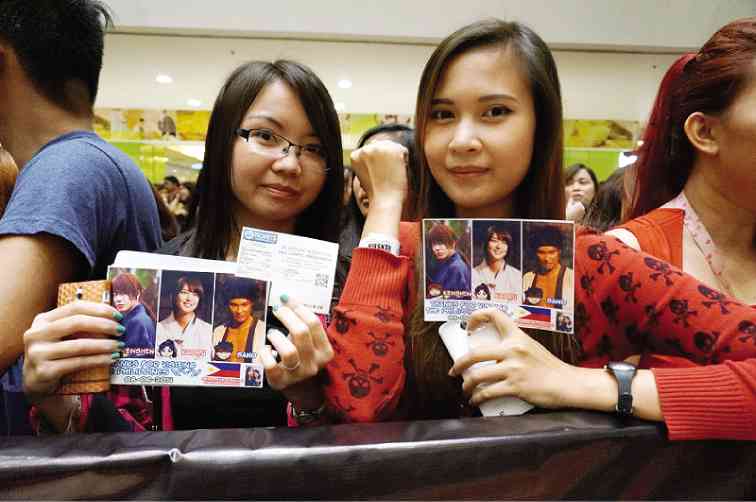 The fans who came to both SM Megamall and Glorietta have a common thing to say: Seeing the stars of “Rurouni Kenshin” is a dream come true.

Nicole Toledo, graduate student in a university in Japan, on the Asian premiere in Manila:
“I was in Manila for a month since it was summer term at my school and I had to do some fieldwork for thesis. I was originally going home on Aug. 4 but around one to two weeks prior to my flight, I found out through many friends that the RK (“Rurouni Kenshin”) actors were coming to Manila.

“I thought about moving my flight. I actually moved it regardless of whether I had premiere tickets or red carpet access. But as luck would have it, I won tickets to see them on the red carpet and got tickets to the movie! I was super happy because I don’t think I would have gotten this chance if I had actually been in Japan.”

Nix De Pano, graphic artist: “This experience has been surreal. To see these people who have brought such beloved characters to life (and very effectively at that) in the flesh was just incredible. I still can’t believe it happened… I won’t forget Satoh Takeru’s Kenshin-like charisma, Takei Emi’s sweet expressions, Otomo Keishi’s coolness. Oh, and Aoki Munetaka is the real-life Sagara Sanosuke. I’m eternally grateful to everyone who made this possible!”

Kass Yboa, graphic artist: “As with any event involving a dedicated fan base, it was a struggle to stand and wait with so many people for hours just to see the actors and the director of “Rurouni Kenshin.” But it was worth the wait! The guests were all warm and engaging, and even signed autographs for almost everyone!

Minako Todani, a reporter from FujiTV, on the screaming RuroKen fans in Manila: “It’s a big day here; (there are) so many fans. In Japan, fans quietly wait for their chance to see the actors, but here many people prepared the pictures, the signs (banners), and (are) very excited.”

Yumi Calderon, Certified Cultural Exchange facilitator and Japanese interpreter, on translation work: “People might think that an interpreter working closely with actors like Takeru Satoh would get an autograph or have a picture taken with them. In reality, no. It might be tempting to ask but you have to maintain decorum, you have to be professional.”