At the Asian Premiere of ‘Rurouni Kenshin’ | Lifestyle.INQ ❮ ❯ 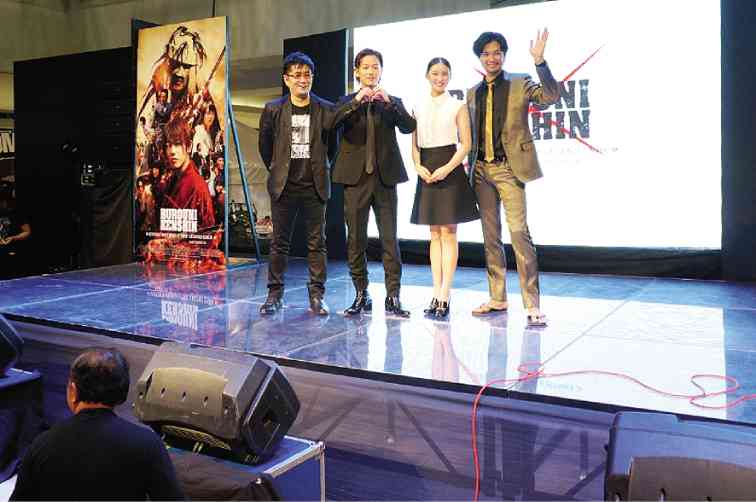 SATOH shows a bit of his humor by forming a heart with his hands.

At the Asian Premiere of ‘Rurouni Kenshin’

A legendary samurai arrived in Manila last Wednesday.  His battle gear was composed of an all-black suit and tie.  His presence was so deadly it made the hearts of fanboys and fangirls stop.

Takeru Satoh, the Japanese actor who played the legendary swordsman Himura Kenshin, attended the Asian premiere of “Rurouni Kenshin: Kyoto Inferno” at the Cinema 9 of SM Megamall in Pasig City. It is the second installment of the “Rurouni Kenshin” trilogy.

“It was very difficult to do action movies with my long hair. But the katana or my costume was harder to manage with all the fight scenes,” Satoh said.

“Rurouni Kenshin” is based on the Japanese Manga series written and illustrated by Nobuhiro Watsuki in 1994.  It was adapted into an animé series on Jan. 10, 1996.  Most Filipinos know the TV series by another name—“Samurai X.”

“Ako po si Takeru Satoh. Masaya po ako na nandito ako,” he said when he took the stage after walking down the red carpet.  It was the first time a Japanese film premiered in the country.

He rarely smiled, but he made himself accessible by giving as many autographs as possible.

Aoki was a scene-stealer in his metallic suit, gold tie, and slippers.

Aoki has won over a lot of fans with his exuberance. He spoke in a loud voice.  He would also begin the conversation with the Filipino press with “Magandang gabi” and end it with “Salamat po.”

Inquirer asked him who among the villains of the film he dreads the most.

“I will not want to face Shishio [Makoto] in real life because he is amazing and scary.  He is very strong and very good,” he said in English. Shishio is the main antagonist in the film.

In contrast to the liveliness of Aoki was the calmness of Takei.  She was calm in the middle of the screaming crowd. She spoke softly but firmly.

“This film has a lot more action scenes than the first film.  I prepared for it by looking at the first film and studying how I could show a more mature Kaoru.  Kaoru’s fighting skills escalated with her relationship with Kenshin,” she said.

A short ceremony was held at the Raffles Makati the next day. Ohtomo and the cast were named as the cultural friendship ambassadors.

“We were surprised that this is the first time that a Japanese film has done this in the Philippines.  We are hoping that starting with the ‘Rurouni Kenshin’ other movies will be able to do this and be seen by other Filipinos,” Satoh said.

They were given scarves handwoven in ikat tradition. They all received graciously, but Satoh went the extra mile by opening his box right there and then.  He laughed at how difficult it was to open his gift.

When he finally opened it, he removed the scarf he was wearing and tried on the gift that he received.

“I will treasure this,” he said.  In return, they presented yukata or summer dresses to Makati Councilor Tosca Puno-Ramos.

They attended a press conference open to the public in the afternoon at the Glorietta Activity Center.

When Inquirer asked, what weapon will Satoh bring with him if he had to fight a war, he had a simple answer.