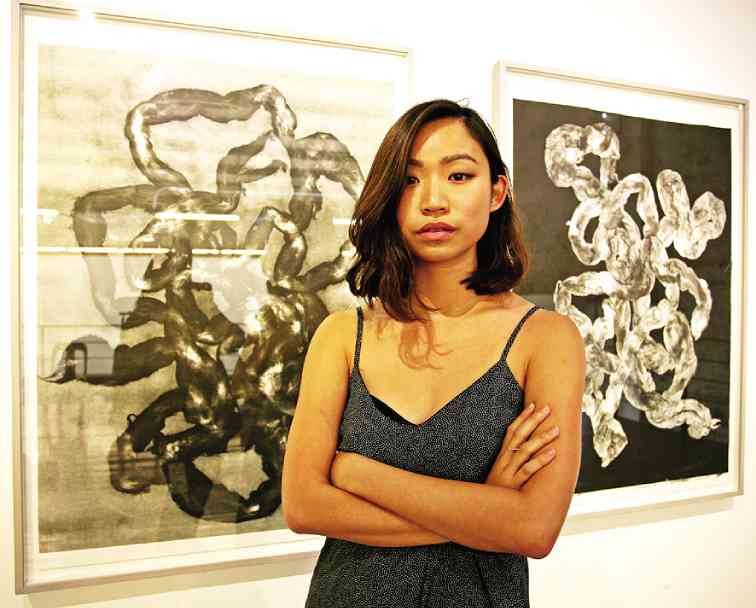 It’s the eve of the exhibit opening and two of the three young featured artists are still in the midst of deciding which piece goes where.

For fresh graduate Nicole Sy Coson, it’s deciding whether one of her monotype prints looks better displayed upside down.

On the first level of Finale Art Gallery, Liv Romualdez Vinluan is sipping coffee and waiting for the pieces from the last exhibit to be taken down so her paintings on large canvasses can be displayed. Strangely enough, the paintings by Liv’s brother Paulo are ready for viewing in the tiny room on the second floor even if he is now studying in Brooklyn, New York.

“Before he left, he already gave instructions about which painting goes where. He even gave the exact distances the paintings should be from one other,” Liv said. “He’s very particular about these things.”

The same can be said about Coson, who graduated two weeks ago with a degree in Fine Arts specializing in 2D art from London’s Central Saint Martins (CSM). Her framed pieces displayed at the second floor of the gallery follow a story, the tale of a young girl who took what was presented to her and ran with it.

“I specialized in 2D art because our class was divided by dimensions, which sounds very silly. There was 2D, 3D, 4D and XD, but this was only because there was not enough space for everyone. Everybody wanted to take up one entire wall. I took that problem, challenged myself and brought my practice to the print workshop,” she said.

Instead of applying paint on a blank canvas, Coson works with metal plates which she evenly coats with black ink.

“From the black, I wipe away an image with textured fabric scraps, a natural sea sponge or even my hands. Using this reductive process is like the invocation of a form,” she said.

She likens the results to paintings because even if they are prints, they are still unique.

“I took what I knew from originally being a painter, the painterly qualities, and transferred them to this printmaking technique. From then on, I found my calling. I wanted to do monotype prints, a special technique in printmaking.”

Although not new, Coson’s technique caught the attention of her professors because she was asked to teach a class where she enumerated the steps on how to create several kinds of monotype prints. In fact, some of the pieces currently on display were made during her last few months at CSM.

A trio of monotype prints has been likened to kinetic dancers or a maze of intestines, but Coson literally brings her viewers back down to earth with an additional element. Located on the floor near the paintings is the medium she used: lengths of inked wool.

“I felt like I was giving movement to something static. With drawings or paintings, people think it’s a representation of something. By including the used wool in the exhibit, they realize that the images they ‘saw’ were actually just the traces of something that was left there,” Coson said.

Vinluan’s large-scale pieces have been described as haunting, but the consensus is that many of them are scary.

“Yes, they’re scary but viewers tend to continue staring. I have the same attitude with snakes. I hate snakes; I think they’re disgusting but I still search them online.

“I think everyone has something like that in their lives. It scares you but you can’t stop looking. If my work has that effect on people, then that’s good enough for me. They don’t have to find it pretty but if it sticks, and you still think about it after you leave the gallery, then I think I’ve done my job,” she said.

It’s a stretch to imagine Vinluan as a provocateur since she admitted not really wanting to be an artist like her dad, Nestor Olarte Vinluan.

“I took up Fine Arts but without the intention of becoming an artist,” she said.

A frightening bout with dengue made her decide to stop school for a year, but when ennui set in, she approached her father and asked to “borrow” a canvas. At first she found the 4’x4’ canvas daunting but she finished the painting based on a photo she took of her friends, and never stopped painting.

“That was the first painting I did for myself, unlike the plates I had to do for class,” she said.

For her exhibit, Vinluan has come up with a triptych of roiling waves, a diptych, and another large-scale, sea-inspired painting she has since dubbed “The Swells.”

She also did a tiny painting, one she can easily cup in her hands.

“This painting will serve as a summary for the whole show,” she said. “In it is a floating, almost sinking sail. Translated, the sea will swallow you in the end.”

Scary stuff—but you won’t be able to look away.