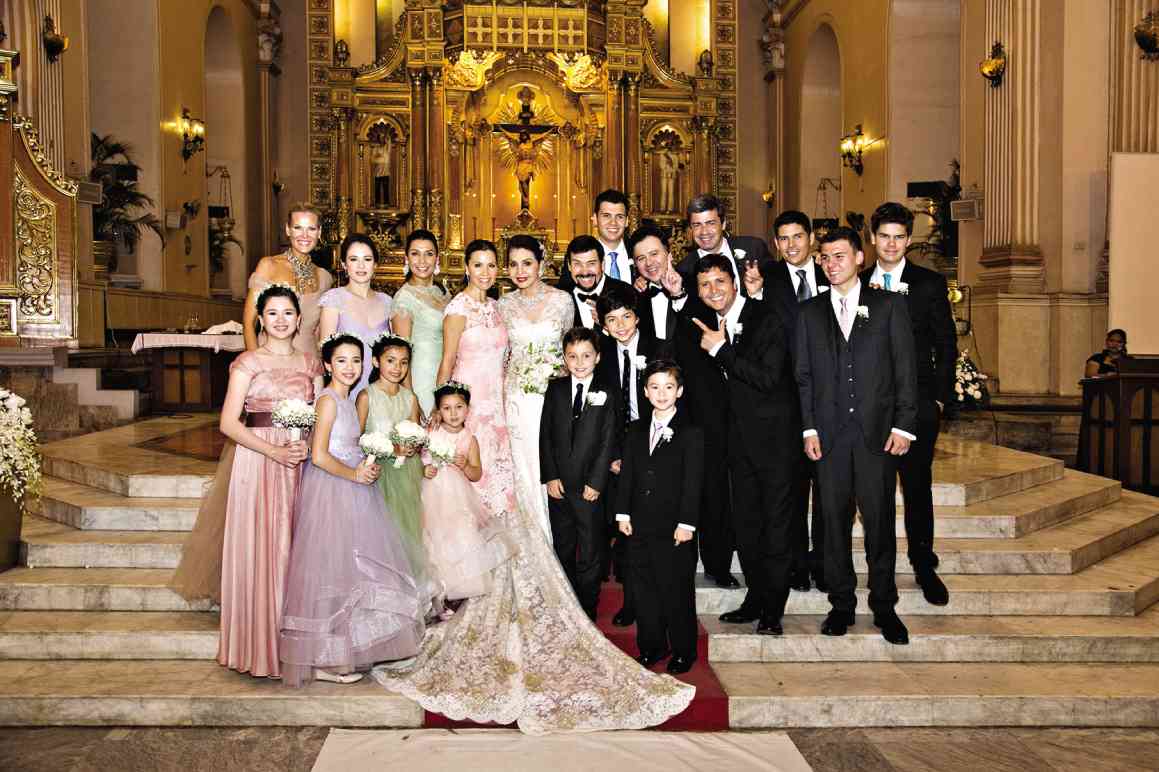 THE GOLDEN couple with their children and grandchildren after the celebratory mass. PHOTOS BY PJ ENRIQUEZ

We arrived in church just as they had closed the door right before the bridal march, and heard Monique Lhuillier’s repeated plea to the wedding coordinator: “Please, I need to fix my mom’s dress.”

Monique was reminding the coordinator that right before her mother’s bridal walk, she must make sure that everything was in place and that her mother, the bride celebrating her golden wedding anniversary, looked stunning.

There would have been nothing unusual with a daughter’s concern, except that in this case, the doting daughter is now a world-famous designer whose clothes are worn by the stars on the red carpet of the Oscars year after year, and whose name is a leading high fashion brand.
It was heartwarming to see her fuss over her mom Amparito Lhuillier. She did it at the start of the bridal march and she would remain alert the entire evening, fixing her mom’s bridal train during the Mass, hoisting it and hanging it on her mom’s arm as the couple danced at the reception that followed.

“She used to dress me when I was a kid. Now the tables are turned,” Monique would say later at the reception, about how her mom took care of her and her older sister Yvette when they were kids, getting them into the habit of looking stylish.

“I am so honored to be your daughter,” she would say in a video interview which they ran at the reception.
Talked about

The golden wedding anniversary of Consul Michel and Amparito Lhuillier last Saturday, Aug. 2, at Cebu Metropolitan Church was easily expected to be one of most-talked-about events in Cebu this year. The golden couple are behind one of the biggest businesses in the Philippines, from the pawnshop chain to the money remittance network here and abroad. With Michel’s siblings, Ambassador Philippe Lhuillier and Marguerite, who are in the same businesses, more or less, the Lhuilliers’ holdings are sizeable.

Like Manila, Cebu, figuratively speaking, is a small town where the social scene is concerned—everybody knew everybody, where it matters. This makes social-watching interesting, even if rather predictable. And the Lhuilliers loom big on that social scene.

Also, Monique  continues to be a global headliner in fashion, a first from the Philippines. When it comes to elegant weddings and ultra-feminine fashion, she is a must-have brand. That became obvious when even “it” novels such as Lauren Weisberger’s “Revenge Wears Prada” mentions “a Monique Lhuillier” in the opening chapter. Her name is always a bold-faced mention in the international press and in Hollywood.

So, we were curious just how extravagant the event would be. In fact, it wasn’t. Nothing was over-the-top. The guests were limited to family and a few friends from Cebu and Manila, who flew in just for the occasion, a handful of them Amparito’s friends from her college days at St. Scholastica’s College in Manila, where she also taught briefly. (The former Amparito Llamas was a Miss Caltex.)

The affair was marked with understated elegance, from the church décor to the reception in the Marco Polo ballroom, designed by Amparito’s good friend, Teresin Mendezona, and her associate Pinky Chang.

It was an evening Mass, so the Cebu Cathedral was softly lit. The atmosphere was quiet and solemn. Instead of flowers, the center aisle was lined with hedges of Boston ferns—these green pillars cradling glass vases of lit candles. Medium-height trees lined both sides of the cathedral, each of them lit from the ground up. The soft uplighting on both sides created a warm glow that enveloped the gathering, making it seem more intimate.

The bridal procession began shortly before 7 p.m., with the principal sponsors and the family paving the way for the golden couple: Rosebud Sala, Teresin Mendezona and Juan Miguel Llamas, the bride’s sister Annamarie Dizon and husband Johnny, doña Pilar Zaragoza (the widow of the newly named National Artist for Architecture Jose Zaragoza) and Vicente Zaragoza.

The Lhuilliers’ children filed in, led by eldest son Charles with his daughter Nicole, followed by Charles’ wife Joana with children Veronique and Marcel; Michael and wife Joanna (of the Joanna Lhuillier evening bag line) and their sons Michael James, Matthew and Myles; Yvette and husband Frank Warnod with children Maxim and Bianca; finally, Monique and husband Tom Bugbee with their tykes Jack and Sophia.
Color coding

A muted color was assigned each Lhuillier sibling—a color coding which the guests found ingenious: lilac for Charles and his brood, blush or beige for Michael’s side, somber green for Yvette’s, and old rose and pink for Monique’s.

The Lhuillier brood, who’s been living abroad, flew home for the occasion—Yvette from Paris, Monique and Michael from Los Angeles. Michael is expanding the family’s financial business in the US. Charles remains in the Philippines to handle the business here with his parents.

When the entourage had filed in, the church doors opened and in strode the golden couple. Of course, the bride wore a Monique Lhuillier—something old was the original train of the bridal gown designed by Pedrito Legazpi 50 years ago, with its antique gold embroidery; something new was the body-skimming lace wedding dress itself which replicated the train.

Fr. Ernesto Javier, SJ, celebrated the Mass with Msgr. Roberto Alesna. In his homily, Father Javier, a good friend of the family, emphasized the milestone and said the celebration should be called a jubilee, a thanksgiving.

It must have been one, indeed. In a private party the night before, in the Lhuilliers’ mountain-top home in Maria Luisa, Michel, looking so happy after a night of performances by his grandchildren, spoke of how lucky and grateful he is, indeed, to have this second lease on life, now in his 70s. He spoke of how happy he is to be with family, and looking at his brother, he broke into a wide grin and said that what keeps him going is “my competition with my brother.”

The business community knows only too well how the respective businesses of Michel and Philippe—from the pawnshop chain to money remittance—are growing apace with each other. Acknowledging his brother and sister Marguerite was the heartwarming touch of the evening. That pre-wedding party was meant for guests who flew in from Manila.
As they dined al fresco, they watched the dance numbers performed by the Lhuilliers’ grandchildren, from the girls doing “Frozen” to the boys doing hip-hop, prompting a longtime Lhuillier friend and Inquirer columnist Jaime Picornell to say that now, they’ve seen four generations of Lhuilliers perform through the decades, starting with the parents of Michel, the patriarch Henri Lhuillier and wife Angelica.

The next day’s reception, last Saturday, after the Mass celebrating the 50th wedding anniversary, was for a bigger crowd, about 300, from Cebu and Manila. It was also merrier and more elaborate, with dances and songs performed by young scholars of Amparito.
Family friend and Lhuillier brand endorser Ogie Alcasid sang “The Way You Look Tonight” and George Canseco’s “Kailangan Kita,” which the gathering loved.

Teresin and her associate Pinky had an ingenious way of decorating the ballroom. Pillars of green ferns greeted the guests at the door. Unfolding at the entrance was a beautifully lit foliage scenery. The ceiling was slightly camouflaged by a maze of green ferns and twigs from which hung the chandeliers and the phalaenopsis. Roses, tulips and hydrangeas were table centerpieces.

An interesting highlight of the evening was Amparito’s idea of giving pearl earring sets to all the widows present—“not separated from their husbands, but widows,” she stressed. One by one, the widows were called to the center of the ballroom to receive the token jewelry from Amparito. Then they all gathered for a shoot, with Amparito seated at the center, beaming.

That was a unique touch. Guests said they hadn’t seen that done in any golden wedding anniversary celebration. But then, any marriage that lasts 50 years can’t but be unique.