One night only: Disco at Strumm’s; OPM Hitmen in Davao | Lifestyle.INQ ❮ ❯ 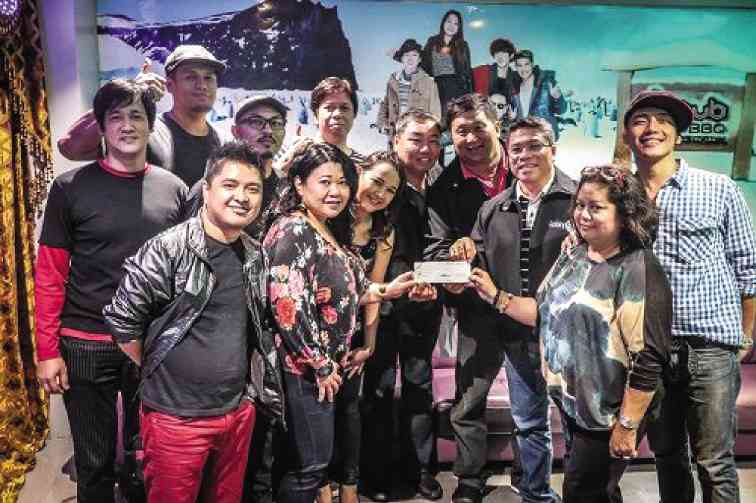 MEMBERS of Side A, South Border and Freestyle withmanagers turn over P1-million check for “Yolanda” survivors to officers of Rotary Club of Tacloban.

One night only: Disco at Strumm’s; OPM Hitmen in Davao

If too much nostalgia makes one feel older, perhaps just a bit of it can be rejuvenating.

On a recent trip to Bangkok we met Milky Evangelista, who works in the Philippine office of the Tourism Authority of Thailand. Over breakfast we talked about his days with the Vicor Dancers in the 1970s.

“Vicor Crowd,” he corrected us, referring to the group—conceived by then Vicor Records PR exec Norma Japitana, said Milky—that ushered in an attractive promotional tool to sell records at the height of the disco craze.

And then the conversation led to Where Else?—the disco club of InterCon hotel in Makati where Milky was a fixture.

“Lord Shiloh was the DJ,” we said, as Milky became more animated. “I used to see Boyet Sison dancing with his friends while predicting aloud what Lord Shiloh would play next,” we added.

As a then high school student, going to Where Else? was a luxury, an exciting destination usually after a party.

The gig is called “Disco Like We Used To,” organized by Milky, Boyet and “Penthouse 7” dancers Sandy Hontiveros, Pipo Liboro and Gina Valenciano. Boyet, also once a popular DJ at Where Else?, will spin records along with other jocks Jon Tupaz and Nino Belza. The band Route 70 will play live dance music.

“Why Strumm’s?” asked Pepper Teehankee who was with our group in Bangkok. What he meant was that the club is actually known for live jazz, rock and pop gigs.

We love going there on Tuesday nights to watch Henry Katindig and his band.

Milky muttered something like Strumm’s owners were accommodating and easy to deal with.

But, thinking about it now, we believe Strumm’s has a few things similar with the old Where Else?: a “sunken” center spot which would be the main dance floor; an elevated area where people could watch the action; and a spacious second level where more people could have fun and dance as well.

On Boyet’s Facebook page, Pipo posted, “Tickets ‘all sold out!’”

In any case, we could always squeeze in and just stand in the sidelines like in the old days. But we have one request for Boyet to spin: “Good Times” segueing to “Rapper’s Delight.”

Otherwise, even “Heaven Must Have Sent You,” a Where Else? staple, would do.

Dubbed “OPM Hitmen in Davao: A Kadayawan Special,” the gig is scheduled on Aug. 15, 7 p.m., at the University of Southeastern Philippines (Usep) gym in Barrio Obrero, Davao City.

We’ve seen the OPM Hitmen sing a few songs at a benefit show in Manila; it would be odious to compare the group with another though elder quartet called OPM Hitmakers, but the least we could say is that Chad Borja is the main force that propels the OPM Hitmen to renewed interest.

It would also be nice to check out the nightlife in Davao during Kadayawan.

A few months ago, Side A, South Border and Freestyle performed together in a benefit concert at the Solaire Resort and Casino ballroom for Supertyphoon “Yolanda” survivors.

The good news is that the effort has raised P1 million—the check of which was recently turned over to the Rotary Club of Tacloban, represented by Joseph Escalona, president, Rotary 2014-2015; José Julio,  community service director; and Robert Koa, district secretary.

On hand to witness the check turnover held at K-Pub in Bonifacio Global City were members of the three bands with managers Celeste Pacana (Freestyle) and Sharon Inductivo (South Border).

K-Pub will also be the venue of another benefit, this time led by South Border’s Jay Durias on Sept. 6. Performing along with his band is the Bleu Rascals.

The beneficiary would be Jay’s nephew, Gonzalo Chua, who badly needs a bone marrow transplant.

More bands are said to be volunteering to play, but the organizers suggest that it would be ideal if they all buy tickets and enjoy the show. Maybe there would be a jam if other musicians show up.

K-Pub is a Korean restaurant large enough to accommodate several hundreds of people. It has a good sound system that is conducive to dancing one’s heart out.