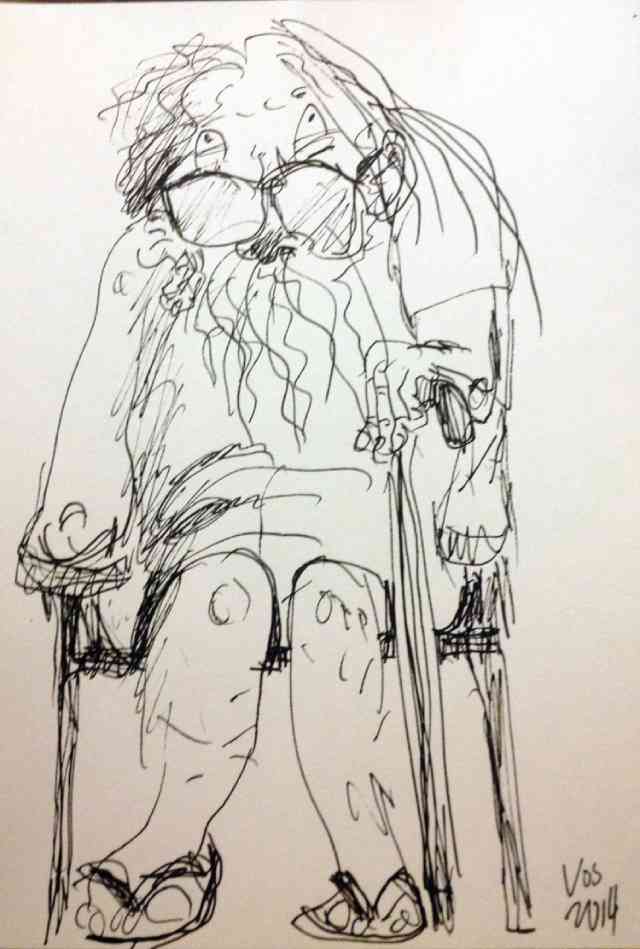 Memory, the great burden of age

So, what do you think?

There, in the presumption that, having lived longer and seen more, one knows better, lies the great burden of age. I may have been lugging that burden around perforce, but I’m not as eager to dispense from it as I used to, as an editorialist. Retired now from that weighty job, I’ve determined precisely to lighten my load and brighten my days.

Alas, what one carries, and in what weather, isn’t always one’s choice. Anyway, caught in that circumstance, I take it all in good humor, if not necessarily with good thinking; more or less set in my ways at this age (68½), I can only hope to have done well by me.

I now feel I’m simply producing thoughts, instead of actually thinking them. I seem to have by now developed a thought system that practically does the thinking for me; it collects my sensations as I absorb them, churns them up, and presents me with a processed product, a rounded thought, a final answer, to dispense. Not at all a bad thing, really: It saves me energy, a resource down to residuals as happens naturally in my case, yet the final say remains mine.

In other words, one is not really deprived of one’s part in the process and, therefore, may be absolved from it. The English novelist Aldous Huxley (“Brave New World”) offers his own take in his book “The Art of Seeing”: “The capacity for perception depends upon the amount, the kind and the availability of past experiences. Therefore it is true that perception depends on memory. Closely related to memory is imagination, which is the power of recombining memories in novel ways, so as to make mental constructions different from anything actually experienced from the past.”

And what if memory fails? What if it becomes, as Huxley qualifies, unavailable? Naturally, the thought system—in his phrase, “the capacity for perception”—collapses. In the beginning, such a failure is occasional and perceptible, with memory not only disobeying its keeper’s summons but in fact arising, testily, when no longer needed. The relationship doesn’t get better, but, if it’s any consolation, when memory leaves altogether, one won’t know or care or be accountable.

And so, to proceed with my own test, what do I think? About what?

Two things are often raised with me, of which one I feel compelled to address not only because it’s my own children asking, for their generation, but because it is I, for my own generation, who is immediately (not to pass the buck behind me) answerable. It involves a large, even existential, question; it’s about how we, the free and responsible fathers that we presumably were, could pass up opportunities and challenges in our time that, taken up, might have spared them the confused and patronage-driven life they live.

No doubt out of a sense of guilt, I’ve been going around facing audiences from that generation explaining myself, coming clean. I do it with two partners—the Jesuit Tito Caluag, who barely made it to my generation, and Carlo Santiago, a sensitive student of history young enough to be my son and sympathetic enough to focus more on events more inspiring and characters more worthy of emulation from our nation’s past.

The second thing is about a more specific, running issue; it is analogous to the first in that if I ignored it I’d again be found guilty of grievous default. It has to do with the president’s differences with the Supreme Court over its ruling finding him guilty of violating the Constitution for the way he has allowed the national budget to be managed—not stolen from, by the way. Being no lawyer, I shall leave the legal debate alone and had rather approach the issue from the simpler, if personal, moral standpoint.

One of the justices has pronounced the president not simply guilty but guilty in bad faith; and their chief, herself suspecting ill timing, if not ill motive, has declined an invitation to face a congressional committee looking into her court’s own budgeting, which may not be at all unlike the precise sort of budgeting it has judged unconstitutional.

Given the leprous jealousy with which it asserts its supremacy, the Supreme Court sure looks leprous itself. Thrown from unclean hands, the Constitution may retain yet its inherent legal potency, but not its moral force.

Given, on the other hand, the compensating merit—the greater good—attained at the expense of the violation, as widely conceded in the case with the president, whose own hands have not been shown to be unclean, he retains his moral ascendancy, even if he loses his legal case.

Take all that as one old man’s meat. But don’t ask me what I had for breakfast.