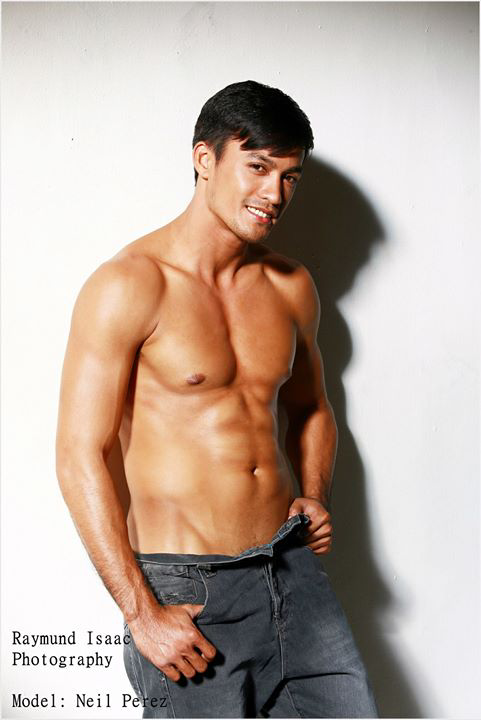 MANILA, Philippines—Don’t be surprised if one day at the Ninoy Aquino International Airport (Naia), you spot a policeman–without the typical beer belly–well-sculpted and has a photo-ready smile.

Neil Perez is one of the Misters of the Philippines 2014 finalists. ‎But when he is Police Officer 2 Mariano Flormata Jr., his real name, he tends to bomb threats at the airport.

Before Flormata was trained to project on camera, his stint at the Aviation Security Group, where he is fielded at present, taught him to specialize on bombs and explosives. ‎

“We are the officers who would respond to unattended bags in Naia,” the 29-year-old Flormata said.

But the officer, who is a Tondo, Manila resident, said his main purpose in joining the competition was to bust the stereotypes on policemen who are typically out-of-shape.

“I joined the contest to promote healthy lifestyle (among policemen)… to boost the confidence of policemen and to show other people that I can do more aside from being a policeman,” he said.

Though he had no experience in modeling, Flormata recalled that he was persuaded by a friend to try out for the contest screening, where he was “luckily” picked.

The finals, where four men will be chosen out of the 26 candidates, will take place on September 7. ‎The winners will represent the country in the global competition.

Formata, who stands 5′ 11″, though revealed that people kept suggesting to him, “Dapat hindi ka na lang nag-police, nag-artista ka na lang (You should have been an actor instead of a policeman).”

But despite this, the police-model would respond: “Bata pa lang ako, gusto ko nang maging pulis. Gusto ko talaga maging Swat (Special Weapon and Tactics) (When I was young, I already wanted to be a policeman I have always wanted to be part of the Swat).”‎‎

Pageants not a problem

For the Philippine National Police (PNP), joining a male beauty pageant is not a problem. They said it actually show‎s the human side of policemen.

‎”Extra-curricular activities are okay as long as it supports and complements their work. It also enhances the idea that the police are also human,” Chief Superintendent Reuben Theodore Sindac, PNP Public Information Office chief, said.

What the PNP doesn’t approve, however, are “run-of-the-mill or shady” beauty contests.

“But (the Misters of the Philippines) is determined to be one of those legitimate competitions that could possibly bring good name, not only to the PNP, but to our country as a whole,” Sindac said. ‎

Flormata said: “My priority is to continue my career as a policeman. In the first place, I only joined this to encourage them (police) to live a healthy lifestyle.”