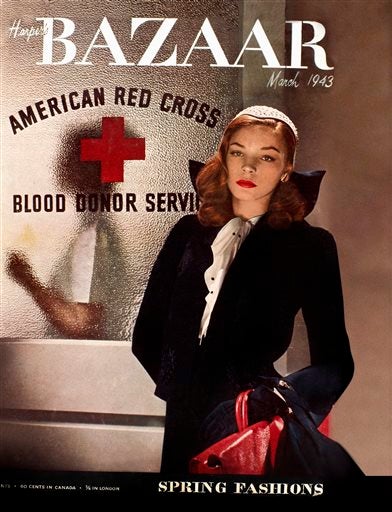 This magazine cover image released by Hearst shows actress-model Lauren Bacall on the cover of the March 1943 issue of "Harper's Bazaar." (AP Photo/Hearst)

The fashion world looks back on Lauren Bacall

NEW YORK — Lauren Bacall had one condition when the Fashion Institute of Technology wrote recently to ask if it could turn hundreds of personal garments she donated into an exhibition about her style.

Throughout her years, Bacall hadn’t forgotten the fashion editor who plucked her from a Seventh Avenue showroom floor and delivered her to Hollywood’s door via the pages of Harper’s Bazaar at age 19.

And next spring, Steele’s museum — with the help of FIT graduate students learning how to curate — will fulfill its promise in a show focused on five designers who helped define Bacall’s subtle seductiveness, her sophisticated mix of classic femininity and raw masculine authority in fashion.

Bacall, who died Tuesday at 89, was a fashion darling of a unique sort. A model at 16, later a pal of Yves Saint Laurent and a frequent wearer of designs by Norman Norell, she wore the clothes — not the other way around.

“She really epitomized this idea of effortlessness. It’s like she never was trying too hard and I think that sometimes is the most difficult thing to achieve,” said designer Peter Som.

“That gaze, the voice, the hair. It was just that confidence. That was something that I think men and women alike could relate to,” he said.

Among Som’s favorite Bacall fashion moments is a casual one from 1946. She’s leaning in a photo on a bent knee propped on a stool near a fireplace in a wool trouser and loose turtleneck suit designed by Leah Rhodes. The pleats are sharp and the sleeves billowy. The only skin bared: her feet, slipped into low-wedge slides, yet her piercing signature sideward glance and wave of long blond hair took the look in a new direction.

“She was the opposite of Marilyn Monroe’s overt sexuality, yet she still oozed sensuality out of every pore,” he said. “The clothes are so simple and so chic, and they still feel today so relevant. They feel like clothes you kind of want to wear.”

In fashion, on-screen and off, Bacall was the grown-up, even as a teen, said Som and others.

Eric Wilson, a fashion columnist for InStyle magazine, fondly notes her role turning the tables on the industry when she played a designer in the 1957 film “Designing Woman.”

“There’s this dress, what appears to be a pale gray sleeveless dress with a loosely draped halter top, and it turns out to be her wedding dress,” he explains.

After a hurried wedding, she goes into an airplane bathroom and changes, emerging in a stretchy navy day look, a mink stole wrapped around her shoulders with a hat and leather gloves.

“That transformation, it’s amazing. It kind of demonstrates her simple, exquisite glamour,” he said.

It’s the kind of transformation that led Steele to include in the upcoming exhibit a Norell dress done up entirely in hand-sewn gold sequins with a matching camel-color cashmere coat that’s plain on the outside but lined with matching sequins on the inside.

“Once you take the coat off, it’s va-va-va voom,” she said, “but covered up with the coat and you can wear it on the subway as just a simple little thing.”

The exhibit on FIT’s Manhattan campus will focus mostly on Bacall’s looks from the 1950s and ’60s. Some of her clothes by Norell will be joined by other designs Bacall donated from Marc Bohan for Christian Dior, Pierre Cardin, Yves Saint Laurent and Ungaro.

Designer Isaac Mizrahi said her intellect is what helped Bacall put her mark on fashion. He explained it this way in the April 2001 issue of InStyle, looking back on her appearance at the Oscars in 1979:

“Wearing a 50-year-old Fortuny dress proved how smart Lauren Bacall was,” he said. “A smart Jewish girl from the Bronx who knew Norell as well as Loehmann’s. She’s our reference for what smart looks like. Look up ‘smart’ in the dictionary — you’ll find her picture.”

“Bacall made it sexy for all women to wear casual clothes. She would wear them in such a glamorous way,” she said. “She played up her makeup, hair and jewelry, all while wearing pants, button-down shirts, knits and flats.”

There were few who so successfully managed such a sexy masculine edge while also being capable of full-on glam, Steele said.

“She wore the dress or the pants. They didn’t wear her,” she said. “Some of what she wore didn’t look prim but it might have on others. Sometimes it was conservative-looking, but she wore it with such panache. It was a combination of Hollywood feminine glamour and masculine, androgynous insouciance and power. The only other person I can think of who could do that was (Marlene) Dietrich.”

Bacall was never elevated to muse for any one designer. Plenty, though, where touched by her style over the decades: Bill Blass, Perry Ellis, her friend Yves Saint Laurent, Donna Karan and Ralph Lauren among them.

Karan, in an email Wednesday, pointed to Bacall’s sophistication and strength as someone who “inspired us all, especially those of us in the fashion world.”

Lauren said in an email that Bacall’s fashion legend relies on glamour that is “beautiful, bold and independent.”

As Som put it of his standout favorite that has Bacall at that fireplace in trousers and sweater: “It’s kind of a butch pose, you know, but she was just so cool. She was a real dame, an old soul even back then, with an innate sense of how to wear things, or not. How she carried that off was magic.”