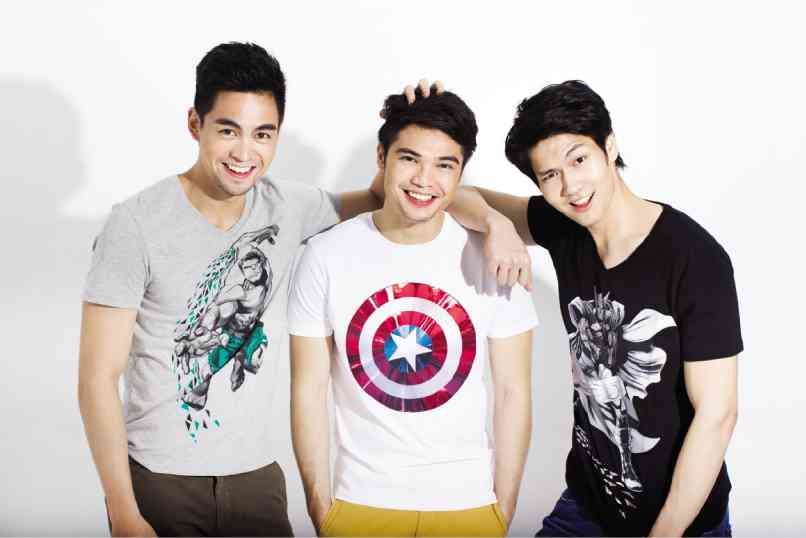 New boys on the block

Life-changing opportunities come around once in a while, and when they do, they should be seized without hesitation. That’s exactly what these three up-and-coming stars have done to be at the spotlight.

Randy Cailles’ first big break came when he joined Mr. Chinatown 2013 where, much to his surprise, he won.

Miko Raval had been modeling for a couple of years when he began getting people’s attention.

As for Raphael Robes, the good word of a family friend got him an audition with Star Magic.

If they did not grab the moment, things would have turned out differently. If Randy were not in show biz, he says that he would either be sitting behind a corporate desk, or running a catering business.

Acting was never in Miko’s plan. His childhood dream was to be a professional basketball player.

Raphael would have ended up working for his dad in the family business as soon as he finished school.

Randy says he’d be comfortable doing melodramas and comedies on TV. “I’m a happy and kalog person,” he reveals. But he can also take on a good challenge.

For films that combine action, drama and humor, Randy dreams of working with Jackie Chan: “I want him to teach me how he does his action takes.”

The two years that he’s been training in acting made Miko realize that his strength lies in drama. But someday he likes to give comedy and action a shot. “If I were to choose my own character to play, it would either be a drug addict, dealer or mobster,” he says.

For the longest time, Raphael wanted to do only comedy because he enjoys making people laugh. But now, he says that mysteries or thrillers would be interesting genres to try as well: “I never really had a dream role. But a character who’s secretly deeply vulnerable would be a great one to play.”

It takes more than talent and guts to survive in show biz. Randy, Miko and Raphael admit that they still get intimidated in the industry.

For Raphael, working with big-name actors and directors can often get daunting. But to get through it, he’s learning to relax and focus on his job.

Randy sees everything as a challenge to grow and learn from: “I seek advice from the more experienced people.”

Randy idolizes Joel Torre among local actors. Some X-factor makes an actor survive in show biz, and Randy says that his idol has exactly that. “Joel can play any role and make me believe that I’m actually living the film,” Randy says.

Among foreign actors, he admires Christian Bale. “Being able to play different characters is one thing,” says Randy, “but physical transformation just to get into the character truly shows dedication to his craft.”

However, these three young actors have the same answer when asked whom they look up to outside of the movie/TV industry: their parents. Apart from helping them get to where they are today, their parents constantly remind them to work hard and keep their feet on the ground. No wonder Randy, Rico and Raphael remain grounded as they attain success.

When they’re not in the spotlight, they’re regular guys enjoying all that life has to offer.

“I want to explore the world!” Randy says. In his downtime, he travels and discovers the world through cuisine. He also tries to excel in various sports when he has the time to train.

Miko fights stress by resting and staying at home with family. When he has extra time, he also works out and joins workshops to improve his acting skills.

When Raphael is not working, he plays basketball, works out in the gym or watches a film. “I also try to finish a book when there’s time,” he says.

This year, people can expect more from these three young talents on television, as they work on their craft.