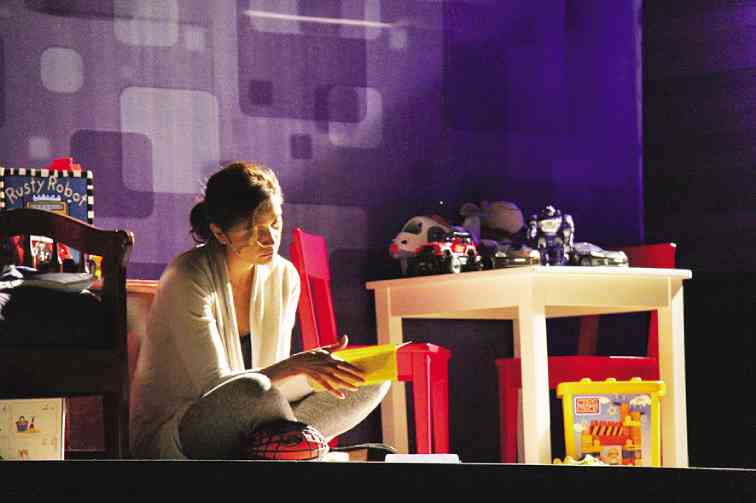 There is much to praise in Red Turnip Theater’s “Rabbit Hole”—one of the trifecta of “beautifully depressing,” emotionally searing shows playing in Manila this month, the other two being the exquisitely mounted productions of Han Ong’s “Middle Finger” (by Tanghalang Ateneo) and Jason Robert Brown’s “The Last Five Years” (by 9 Works Theatrical).

Never mind that “Rabbit Hole’s” venue, Whitespace, does not have the ideal acoustics, and so requires the viewer to contend with the performers’ voices occasionally bouncing off the place or petering out.

There is also no real stage here. The set must literally sprout out of the ground originally designed for parties and other events. And though that wasn’t a problem with Red Turnip’s past two shows—a map of the London Underground for “Closer” and a bloody red cockpit for “Cock”—this time, the space inadvertently subverts one of the production’s missions.

“Rabbit Hole,” the Pulitzer Prize winner by David Lindsay-Abaire, is about a grieving couple, a family trying to get back on its feet after the tragic death of their child. This Red Turnip production confines the play to a sprawling set of a house, with a living room, kitchen, even a second-floor bedroom, intricately and obsessively furnished down to the bottles of beer in the fridge. (The set design is by Faust Peneyra.)

The keyword is “sprawling,” because the artistic team mentioned that this “Rabbit Hole” is intended to be a voyeuristic experience, where the audience members are seated so close to the action, it’d be like they were unwillingly spying on the neighbors.

But even with a thrust design—with the audience surrounding the stage on three sides—the set still feels too big, and the actors, distant.

So it must speak miles of this production’s virtues that, despite the less-than-desirable geography, every scene in “Rabbit Hole” bears astonishing emotional clarity, and every line conveyed to the viewer rings with  the cold, unforgiving truth.

This is a play loaded with subtext. It relies on the slow unraveling of events, on the viewer’s ability to pick up clues, just as the characters do a lot of talking but spend even more time trying to intimate between the lines. Not for a moment does this two-hour play err on the side of unbelievability, and that can only be the achievement of actor Topper Fabregas in this directorial debut—his assured, perceptive direction.

It’s been eight months since Howie and Becca lost their son Danny in a car accident. Both are doing their best to cope and seek comfort wherever it may lie, but are evidently finding it almost impossible to move on.

To the world, to their family (Becca’s mother Nat and her sister Izzy), and even to each other, they struggle to keep a facade of painless existence.

Through Fabregas’ ministrations, we see how these characters feel obliged to maintain  silence, ignoring the elephant in the room, so to speak, that is Danny’s death.

This is the glass house that Fabregas has assiduously constructed—where everything looks “fine” and everyone acts “okay,” though the viewer  knows it isn’t so, beneath that polished surface. It is through this glass house that his intelligent cast, led by screen actress Agot Isidro and Michael Williams, has bravely walked into.

The sadness is so tangible in “Rabbit Hole,” so that one can’t leave the theater without feeling depressed, even if mildly. Not only do we  see this  family’s pain, or feel it; we actually also understand it.

The heart of “Rabbit Hole” is Isidro’s shattering performance as Becca. What we see at first glance is a woman who seems to go on, with the burdens rippling just beneath her skin. But what Isidro really gives us is a Becca quietly struggling with grief, a woman who must endure the torture of the memory of her son and the imprints he leaves  in her house.

In one scene, Becca invites over to her house the driver who hit Danny, a 17-year-old named Jason (Ross Pesigan). He goes there to confess, maybe to seek absolution; she, instead, tries to get to know him as a person.

She asks him about prom, and in the middle of Jason’s retelling, Becca suddenly breaks into tears. It is impossible to watch this incredibly delicate scene and not relate to the mother’s heartbreak. After all, to outlive one’s child, to know that he or she will never get to enjoy the normal things in life, is a pain only the bravest parents can endure.

Williams is no easier to watch onstage (and that’s a compliment). Consider how Howie must still play “pillar of the family,” to be the voice of reason in his marriage. But Becca sees right through him.

“You’re not in a better place,” she tells him, “just a different place.”

Watch how Williams allows Howie an armor of toughness during the day, then subtly sheds it off in the dead of night as he seeks solace in Danny’s baby videos. It’s a performance so spare, yet utterly absorbing.

However heavy on the heart “Rabbit Hole” can get, it also has its pinpricks of comedy, mostly through Izzy and Nat.

Che Ramos-Cosio is an absolute delight as Izzy, the way she infuses the character with a devil-may-care attitude in her unending, if ill-timed, battle to be the room’s main attraction. It’s the combination of body language and perfectly timed line deliveries that makes one wish Ramos-Cosio’s version of this character gets her own spinoff.

And Sheila Francisco is a portrait of misplaced motherly instincts as Nat, a woman trying her best to keep things light and be of service to her hurting daughter, but ends up causing more damage simply through the things that come out of her mouth. She also nails a monologue (in a nutshell, “The Kennedys are cursed”) that one wishes would just go on and on.

There is a bedroom scene in Act II where Becca and Nat sort out Danny’s things—what to keep, what to give away. What they’re really doing, though, is trying to find common ground as two women who have tragically lost their sons and are trying to make sense of  what many would rather call “God’s plan.”

It’s a sequence so flawlessly executed, where almost every emotion is summoned, where body language and conversation are employed to paint a sorrow so big yet unseen.

Fabregas and his actresses should consider this among the truest, brightest moments of their careers.