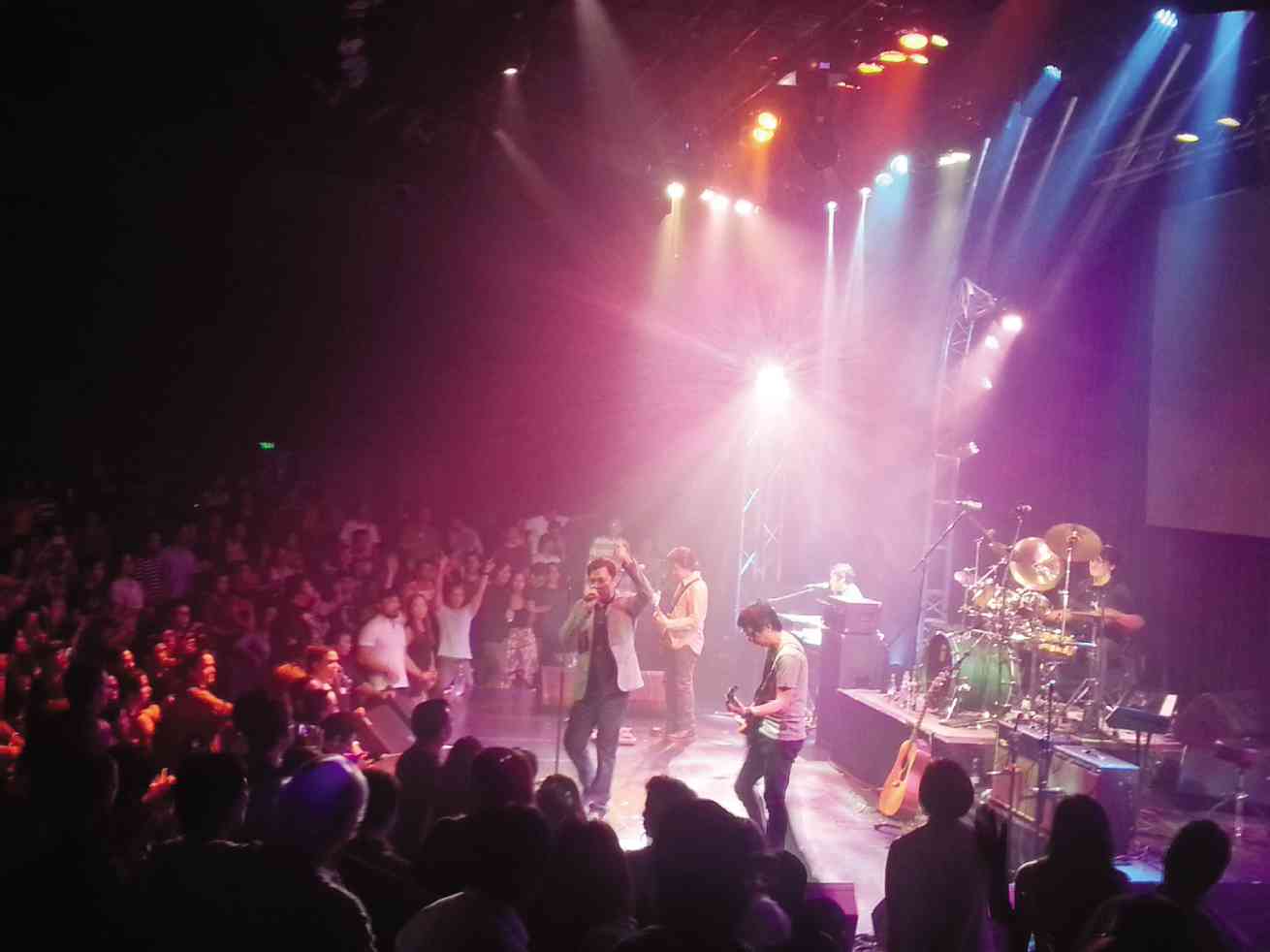 Back in high school in the late 1970s, we used to call the Greenhills Shopping Center simply as Unimart—referring to the supermarket that used to be the main facility of the San Juan commercial complex.

Good times spent in those days consisted of hanging out at the parking lot fronting the Padilla Arcade and drinking beer at one of the restaurants in Virra Mall.

The old parking lots around Unimart have since given way to more commercial outlets, with the promise of more good times in lots of restos and a number of bars.

The center of nightlife is in the vicinity of Music Museum and Promenade—a mall that includes Teatrino (a concert hall smaller than Music Museum but with a club setup) and three new cinemas equipped with the latest audio technology called Dolby Atmos.

It’s good to know that Music Museum has withstood the test of time and a fire that temporarily closed it down in 1992. Two weeks ago, a different kind of heat engulfed the venue—an almost full-house crowd cheering the fiery performance of The Dawn.

Now managed by Lizza Nakpil, the band is on the cusp of a more dynamic and possibly higher creative phase with a new member, guitarist Sancho Sanchez. A veteran musician and record producer who has played with the likes of The Eraserheads and Cynthia Alexander, Sanchez was a welcome presence at the gig, cranking out nerve-twisting riffs that infused The Dawn’s songs with renewed energy.

It’s been a long time since we last saw The Dawn perform live, and that night seemed special—vocalist Jett Pangan, drummer Jun Boy Leonor and bassist Buddy Zabala gelling well with Sanchez and guest keyboardist Lenie Llapitan, playing like the country’s greatest rock ‘n’ roll band. There was power and conviction in “Dreams,” “Iisang Bangka,” “Salamat” and “Enveloped Ideas”—songs that we tended to ignore in the past but have now reemerged as vital, if crucial works in the post-Juan de la Cruz era of 1980s Pinoy rock.

Some of the other old tunes, in fact, sounded new—“Runaway” and “Little Paradise” wonderfully slowed down with just Leonor on keyboards and Pangan enunciating their childlike innocence.

The band actually has a couple of new songs; “Habulan” was introduced as a freshly recorded single, hopefully to be followed by more compositions soon.

In the meantime, it would be nice if Nakpil can book more gigs so that more fans could see The Dawn in a new light.

By the way, Music Museum management should make sure it doesn’t run out of cold beer during rock gigs. Serving warm San Miguel Pale Pilsen is bad service.

Farther out front, just off the shopping center’s walls on Ortigas Avenue, is a cluster of bars called G-Strip, the most prominent of which is Musica. We’ve been here a couple of times to watch bands playing retro rock, pop and jazz.

Russell seemed more relaxed and confident since we last saw him play a few months ago; he should perform more often, the better to sharpen his act and shake off any trace of corporate stiffness on his shoulders.

What makes his band exciting to watch is guitarist Jun Raymundo of the old Bits and Pieces; he’s said to be 67 years old but looks a lot younger and plays distinct solos like a real rock star.

There’s also Lenny de Jesus who joined the band on acoustic guitar and keyboards; like Russell she’s also reliving her musical dreams, having been trained in piano, flute and other classical instruments during her childhood. She laughed while recalling how her former colleagues in government would rib her: “‘Hoy Lenny, anong ginagawa mo dyan sa stage?’ I told them, ‘hoy, kung nagseryoso ako sa music noon, hindi ko kayo nakasama.”

The Theatre at Solaire

The Theatre at Solaire is how the resort-casino calls its new performance venue, set to formally open to the public on Dec. 2 via a foreign production of the award-winning Broadway musical “Chicago.”

Information sent by Solaire PR head Joy Wassmer says that The Theatre has a seating capacity of 1,760—bigger than the country’s premier theatrical venue, the Cultural Center of the Philippines.

The Theatre, designed by architectural firm Aedas and provided with high-end audio, video and lighting systems by Las Vegas-based consultant group Coherent Design, is said to have a “fan-shaped layout that allows excellent sight lines from every seat.”

We’ll see how good it really is on Dec. 2. It’s supposed to have a sort of dry run on Nov. 26 with a strictly invitational show by Celine Dion, but she has recently canceled all her commitments until March 2015 due to her husband’s illness and her own throat problems.