My own depression: My choice not to cross the line | Lifestyle.INQ ❮ ❯ 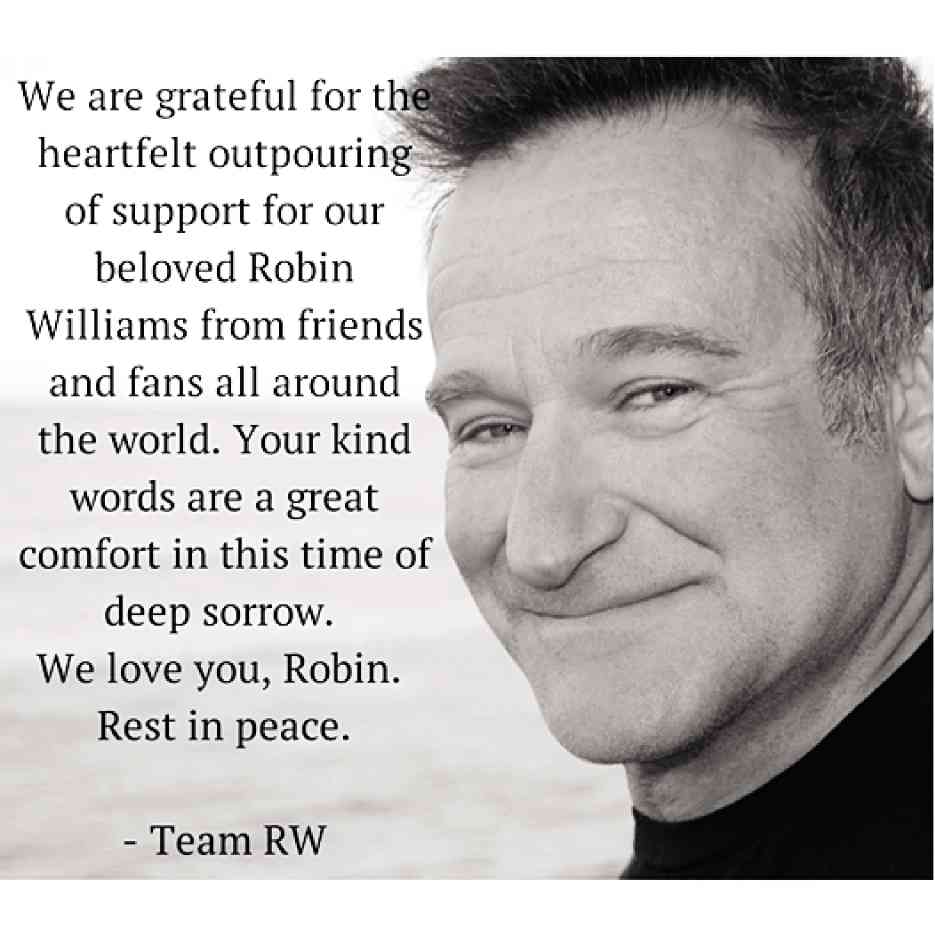 My own depression: My choice not to cross the line 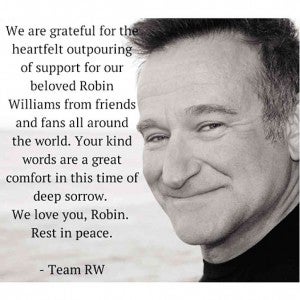 I wasn’t sure I wanted to write this piece. But then Robin Williams’ suicide hit the news, and I was so saddened—not just because he was one of my favorite comedians, but also due to this thought: “Another one loses the battle.”

It’s the battle against depression—a quiet, terrible struggle that happens inside a human being—leaves few visible scars, but is nonetheless deadly because it is so silent and often misunderstood.

Millions of people all over the world, normal people with happy families, good careers, fruitful relationships and decent abilities, are fighting clinical depression—including me.

And no, it isn’t the same as getting the blues, angst, emo, drama, or even the occasional bad day that many people have. Clinical depression is a serious, legitimate illness; it’s not a character flaw, a sign of weakness or a personality defect.

Yes, it is a mental illness, but it doesn’t mean that a depressive person is permanently incapacitated, untrustworthy or out of his or her mind. In many cases, it’s a chemical imbalance, and no amount of telling a person to “snap out of it” is going to work if he or she is not well.

For those who need to quantify what exactly “not being well” means, I found a good explanation by Dr. Daniel K. Hall-Flavin on the Mayo Clinic website: “Depression ranges in seriousness from mild, temporary episodes of sadness to severe, persistent depression. Clinical depression is the more severe form of depression, also known as major depression or major depressive disorder.”

Hall-Flavin proceeds to list several symptoms; having five or more of them consistently over a two-week period, “most of the day, nearly every day,” could indicate illness.

The behavior includes feeling sad, empty, tearful or even irritable; reduced interest or pleasure in most activities; extremes like significant weight loss or weight gain, decrease or increase in appetite, sleeping too much or too little, or restlessness or slower movement; fatigue; difficulty concentrating; and the most insidious, in my opinion: thoughts of or actual attempts at suicide.

I experienced my first bout with depression in the mid-1990s, after a personal crisis. I’ve talked about the experience, using my real name for a book on depression stories by Dr. Margie Holmes in 2010, “Down To One.”

It was a terrible time; I ballooned to 210 lbs and would sleep at 4 every morning, only to get up a few hours later to go to work. I was tired, unmotivated and crying incessantly, but I sought solace in my work. I had given my depression an image, “the hollow block,” because that’s what it felt like, sitting on my chest every morning. Can you imagine how hard it is to feel like crying as soon as you open your eyes?

Then one day, I faced the computer screen and couldn’t write a word. That’s when I knew I needed help.

Getting help is not that simple when your family has no experience or idea of how to deal with depression. My mother thought it was just my “arte.” So, at the time, I dealt with my illness mainly with the support of friends, although some relatives learned about it after I was being treated. My psychiatrist, who is also my cousin, provided just the right guidance and let me talk through my issues, with which he was familiar.

He also put me on Prozac for a few months. Now, just mentioning anti-depressants still scares the living daylights out of many people today, so you can imagine what people were saying back then. In a culture like ours, where problems are solved by talking to friends over bottles of beer, the idea of mind drugs remains daunting.

People who didn’t know jack about what I was going through said I was messing with my head, poisoning my liver, avoiding the issue. I remember a physical exam in the office I was working in, where the nurse asked me if I was on medication. When I said “Prozac,” she actually whispered conspiratorially, “Huwag na natin isulat yan, ha, ma’am”—like I had just told her I had the Ebola virus.

Others also said I should just pray, implying that I didn’t know how or wasn’t doing it right. Well, I was praying hard, and I knew God heard me—that’s how I mustered the courage to do something concrete and “radical” to help myself.

To be sure, drugs were stronger and more expensive at the time; Prozac was P98 a pop in the mid-’90s, and I was stoned for two weeks before the medication kicked in.

People will have different opinions about medication, but this is mine: When you’re depressed, you cannot confront the most painful issues of your life with a clear head. Medications can temporarily dull the pain so you can look at your demons, and keep looking at them until they’re not so scary anymore and you no longer need the cushion.

I would marvel at how, when I would feel my spirits plummet, there would be an almost palpable halt in the descent—like a safety net, catching you as you fall.

This is how I understood the chemistry: Prozac (Fluoxetine) belongs to a class of drugs known as  selective serotonin reuptake inhibitors (SSRI). Serotonin is a neurotransmitter, sometimes called the “happy stuff” in your brain that maintains mood balance; SSRIs regulate serotonin levels so you don’t get depressed.

The important thing is to have a plan with your psychiatrist, and we did; the medicines allowed me to think about what was dragging me down, process it, and with a lot of prayers, let it go.

I also discovered yoga in 2001, towards the end of my last round of medications, which truly helped me heal.
Medication is not for everybody, to be sure—but if your doctor determines it’s for you, and you’ve exhausted every other option you can think of, I believe it can help.

I wish it ended that simply. Then again, my boss and friend Thelma told me it takes maturity to accept help—again.

I was diagnosed with breast cancer in June 2013, and completed treatment in April 2014. I was upbeat and focused throughout my six months of chemotherapy, but the week before my very last session, I crashed. I was a weepy, despairing mess. I eventually pulled out of a five-day funk, but I should have taken the hint then: I was mentally and physically exhausted, and running out of gas.

After I completed treatment, I was pushed into menopause. I’m not sure if it was my predisposition, having suffered from depression in the past, or the onslaught of hormonal changes and the proverbial midlife crisis. Some studies also suggest that the drugs pumped into you can lead to a chemical imbalance.

Either way, I was blindsided by the sadness that enveloped me after treatment. When you’re expected to be all sweetness and light, and bounce back into life when you don’t feel like it, the pressure can be tremendous; you feel ungrateful, unresolved, lost.

I fielded the question to some fellow cancer survivors, and the answer surprised me—most had experienced some sort of mood swing, sadness or emotional disturbance after the end of treatment.

One night, driving home from work, I was suddenly overwhelmed by a feeling of uncertainty about the rest of my life, and I ended up pulling up in the car on White Plains Avenue at 11 p.m. and bawling my head off. That happened a few more times before I decided to do something.

I am deeply thankful that I have been saved from a life-threatening disease with what I consider minimal damage—but I have also accepted that the depression came back, although I am more aware of what is happening, and I now know that it will certainly pass.

This time, I was guided to a doctor with a great empathy for what’s happening to me. I initially felt like a failure; 12 years with no medicines, and now this, and as any recovering depressive will tell you, few things are more depressing than having to accept that you’re depressed again!

I appreciated the way the doctor put it to me, however: After assuring me that drugs now are much “cleaner” than a generation ago—I never even stopped driving when I started taking this new, inexpensive pill—she said, “You don’t have to endure this. Give yourself a break.”

So that’s what I did. The medicine, which my doctor sees me taking for a specific time, is already working. I haven’t cried in days; I am more myself again, and looking forward to a vacation I have been planning for a while—my first since kicking cancer’s butt.

I’m back to my yoga, although I have yet to get my full strength back. My dearest friends have reserved judgment—“Whatever helps you,” they said. “We’ve got your back.”

In her insightful book “Shoot the Damn Dog: A Memoir of Depression,” former Elle UK magazine editor Sally Brampton wrote: “You see, we want to be better, we want to be ourselves, and it is not through any lack of trying that we fail. But we do fail, because we are deep inside an illness. And it is that failure, and that struggle, that sends us into a despair so terrible that we would rather not exist.”

Have I thought about killing myself? I think every depressive does, almost like an escapist fantasy. But it is the love of people around you—and a dogged faith in a higher power who, time and again, has pulled you through—that will keep you from crossing that line between thought and action.
Please remember that if you’re depressed, or if you have a loved one who is depressed: There will always be hope. We should always choose to never cross the line.

But we also have absolutely no right to judge the people who do. It’s a choice they make, and almost certainly only after a long and painful struggle. I am incensed by self-righteous, despicable social media comments that Williams was weak, a coward, selfish or burning in hell (like they would know for sure, right?).

Constant sadness is profoundly exhausting, and it can break anybody; if you’ve never felt such despair, then consider yourself blessed, and show some compassion.

I’m sad that Robin Williams crossed the line, but I send my love with this wonderful genius who gave so much happiness to others, as he goes home to a better place.

I will never cross that line, because I believe God is holding my hand, and I’m a strong, fabulous woman. Hell, I was strong enough to write this.