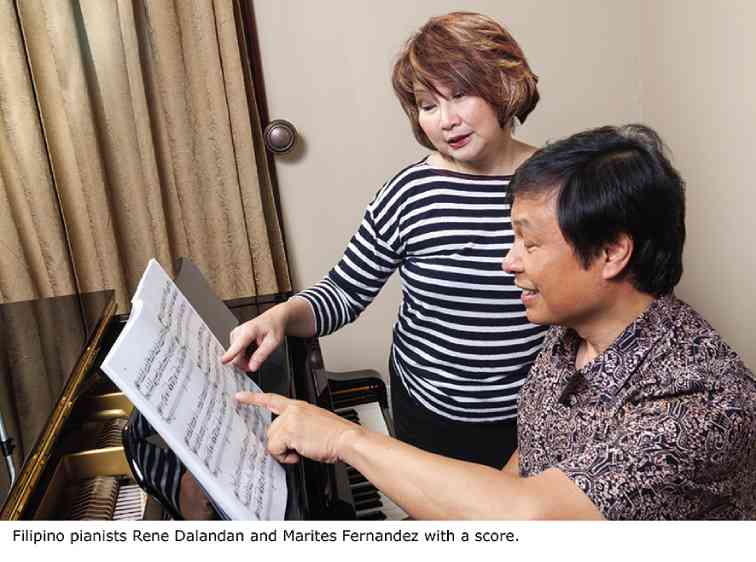 FILIPINO pianists Rene Dalandan and Marites Fernandez with a score

The Cultural Center of the Philippines with the Gilopez Kabayao Foundation, Inc. presents pianists Rene Dalandan and Marites Fernandez, in “DANZAS: A Duo Piano Concert,” on Aug. 23, 7:30 p.m., at the Tanghalang Aurelio Tolentino, CCP Little Theater.

They will give the premiere performance of the three major works in the program: Points of Jazz: A Ballet by Dave Brubeck; Symphonic Dances from “West Side Story” by Leonard Bernstein, arranged by John Musto; and Symphonic Dances, Op. 45 by Sergei Rachmaninoff.

Fernandez was known as “the child genius of the ivories” since she was three years old. Enjoying full scholarship from the Foundation of Gifted Children, she completed her Bachelor of Music in Piano and Artist’s Diploma at the UST Conservatory of Music under the virtuoso pianist Benjamin Tupas, with special coaching from Sanz Gonzalez. She earned Masters of Music in Piano at the Peabody Conservatory of Music in Baltimore, Maryland, studying with Walter Hausig and Ellen Mack. While still at Peabody, Marites was awarded the Austin Conadi Piano Scholarship. According to critics such as The Review, Vancouver, Canada, Fernandez was praised for her “great display of technical skill and endurance” as well as “mesmerizing” performance.

Proceeds will benefit the Aida Sanz Gonzalez Memorial Fund to preserve and promote the legacy of a committed and dedicated piano mentor to the present and future pianists and teachers, thru sponsorships of scholarships, workshops and the production of a book on Piano Pedagogy based on her teachings.