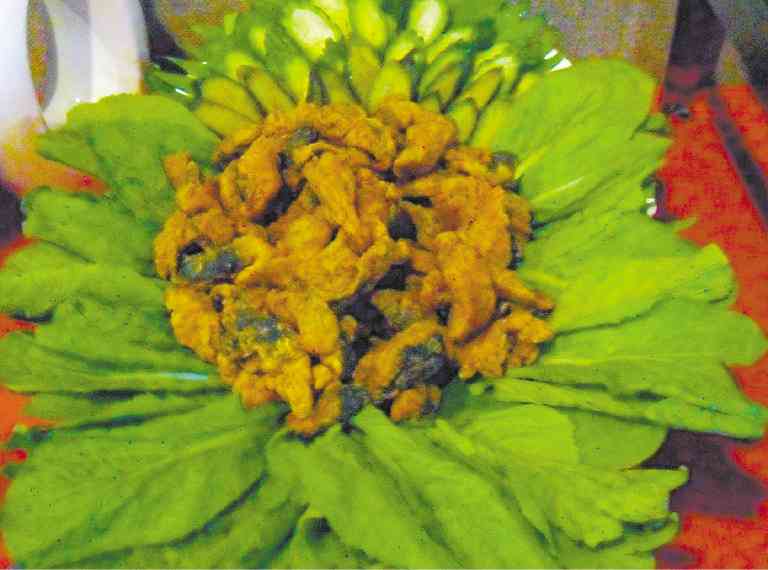 Every year, Cagayan de Oro (CDO) is a destination for the culinary competition known as Kumbira, organized by the Cohara (Cagayan de Oro Hotel and Restaurant Association). Kumbira celebrated its 18th anniversary this year; I was there in its early period when the venue was held at a small place before moving to a huge atrium.

The increasing number of culinary schools has contributed much to the success of Kumbira.

The changes in CDO itself are palpable—more buildings rising, the city center expanding. The city has bounced back from the bomb blast last year and the devastation of the floods the previous year.

This time we were billeted in one of the newest hotels, Luxe, owned by the Limketkai family, with a walkway that links it to the Limketkai mall.

Breakfast in the market

Kumbira judges are treated to regional specialties offered by our generous hosts. Sometime ago I learned about sinuglaw—a mixture of pork sinugba (charcoal-broiled) and fish kinilaw (ceviche). I had written then that “sinuglaw should have the following ingredients: bahal which is midway between buko juice and vinegar; tabon-tabon that is scraped to help with digestion and the suwa or lime which gives the mixture its lemony and soapy smell.”

We had variations on the lechon, roasted pork always stuffed with aromatic lemon grass; breakfast at the Cogon market where tsokolate and a rice cake called puto maya are the main attractions; and sampled local delicacies like ham (Pine, Oroham, Slers), kesong puti and binake, a native cake made from cornmeal and milk.

And the fruits, oh, so much of it—mangosteen, marang, lanzones, durian—some of which we bought home to Manila because they’re so cheap.

We had adventure trips as well. I liked white water rafting so much that I did it again, enjoying its heart-thumping ride through the Cagayan river and the picnic that awaited midstream—grilled fish or chicken, salad of lato (fern), mangoes and tomatoes.

A trip to the Pelaez Mapawa Nature Park revealed the breadth of 300 hectares of forest preserve that can be viewed at a spot called the Pinnacle; one can also get up close to trees like the centuries-old dao (Dracontomelon dao) and scary looking balete (genus Ficus). The place is ideal for eco-tourism jaunts and conferences.

Mapawa was where we had dinner at the home of former vice president Emmanuel Pelaez, hosted by his son Bong and wife Beng. The couple’s home-cooked meal included goat kaldereta and sinuglaw; the roast beef was ordered and cooked in the house.

The Pelaez home is high up in the mountains, its pathways lighted by torches and candles. The couple also hosted our stay at the family’s Duka Beach Resort in Medina, about two hours from CDO where the kare-kare, deep-fried lechon, guinataang kalabasa with fried danggit, tinola of native chicken and the binignit (guinataang halo-halo) were exceptional.

We also tried out a new concept restaurant called Redtail Shrimps and More, owned by the Chavez family (located at Papa Juanito’s Square, Limketkai Drive). The food, usually crabs, shrimps and fish, comes in plastic containers where it is supposedly cooked in a regular or a spicy sauce.

There is a line of diners waiting for their turn to be seated. They have rice on paper table mats, pouring sauce on the rice from the seafood dishes before eating with their hands. A plastic bib keeps sauce streaks from ruining your clothes and plastic gloves are offered to those who don’t like to have their hands “dirtied.”

Nothing beats freshly cooked food; but even the uncooked, like kinilaw of tuna, was tasty.

Binulo restaurant in Clark, Pampanga, celebrated its third anniversary with a dinner for family and friends.

It is owned by Maricar Angeles with business partner Rico Gilas whose recipes are part of the restaurant’s menu. The food is cooked in bamboo—binulo in Kapampangan, hence the resto’s name, a tradition learned from the Aetas who usually had rice and soup of chicken.

The restaurant also serves dishes with names that don’t give clues of their origins. It has the best chicharon ever, pititian (though the chicharon bulaklak comes a close second), and a barbecue of chicken tail called paldewut.

What a delicious way to convince you that Filipino food is indeed varied and outstanding.