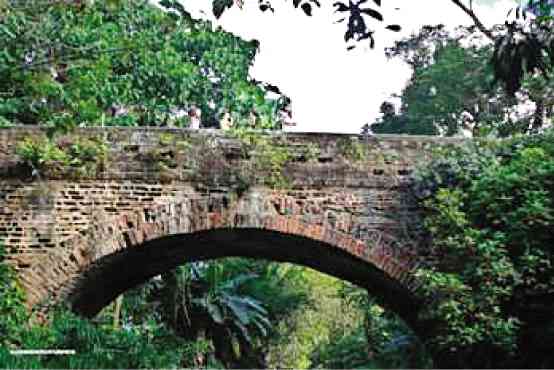 Heritage advocates and concerned citizens of Nueva Vizcaya province are up in arms against a plan by the Department of Public Works and Highways (DPWH) to demolish a 200-year-old bridge built by the Spanish missionaries and the Isinay cultural community in Dupax Sur town.

“Help!” Maria Nela Florendo of the History Department of the University of the Philippines Baguio wrote José. “The Isinay  of Dupax would like to keep their brick bridge which is about to be demolished by the DPWH.”

Florendo said Amores had written a protest letter against the DPWH plan.

José lamented the DPWH had removed sections of the protective brick covering. This might expose the ancient bridge to further damage.

“We urgently seek protection for the 196-year-old Dampol Arch Bridge built by Spanish Dominican friar Fr. Francisco Rocamora in 1818,” Amores wrote. “Dampol Bridge is being threatened by a road construction and widening by the DPWH-Nueva Vizcaya 2nd District Engineering Office.

“This is an important historical and cultural landmark in Dupax, and we hope to protect it from demolition, to preserve and [have it declared] a National Cultural Heritage.”

Dampol Arch Bridge is a single-arched brick bridge that spans the Abanatan creek which divides Dupax Sur and Dupax Norte, said Amores. It is one of the few remaining historic landmarks in the area.

The early Isinay, with other indigenous groups living in the old Ituy area, built the bridge.

Native hands crafted the red-colored brick from an old adobe workshop near the Dominican church of San Vicente Ferrer in Dupax when Fray Rocamora was vicar, Amores said.

The bridge connected Dupax to nearby towns and facilitated the transport of people and products for trade in horse-driven carts during the earlier period. It has remained as one of the oldest tangible icons for the Dupax community, said Amores.

DPWH-Nueva Vizcaya has told locals it regards Dampol Bridge as part of the national highway, and has indicated it will conduct diggings and bridge excavations. This will certainly destroy the very foundation of the bridge.

“Although we see this construction as part of development,” Amores said, “it should not be to the detriment of a heritage site valued by many people.

“The Isinay community is pleading for your kind support to help save this important cultural heritage.  This indiscriminate and blatant disregard for historical and cultural heritage hurts us. We hope and pray that Dampol Bridge will be preserved, not only for Dupax but also as part of the Filipino national heritage.”

José said he supported the appeal of Amores and Nueva Vizcaya citizens.

“I support the conservation of Dampol Arch Bridge, of course, and hope that DPWH will not harm it in any way,” José said. “But it looks like part of the protective brick wall has already been taken down in sections, exposing the inner filling to decomposition.”