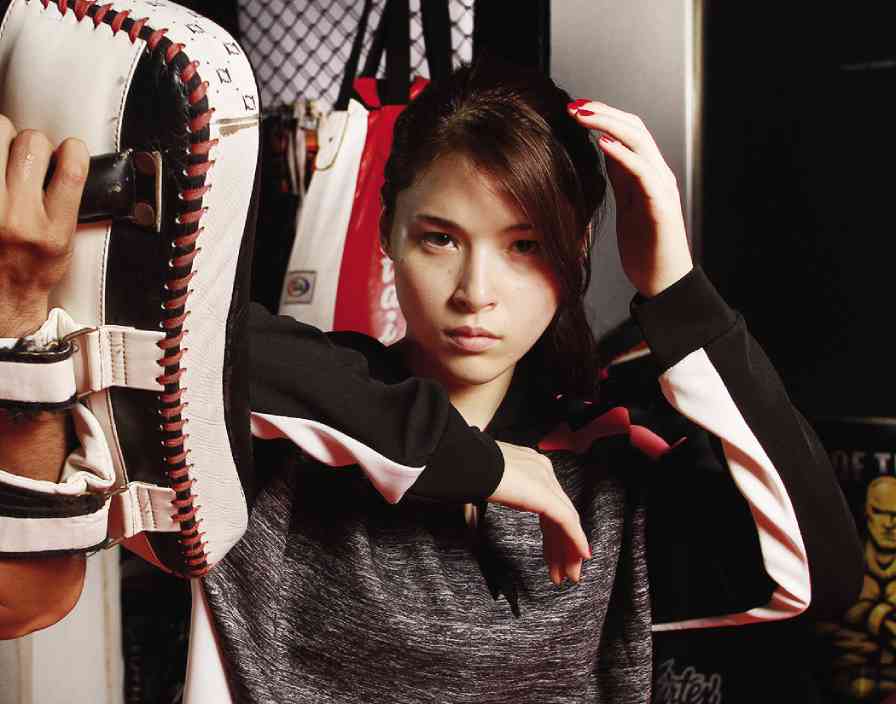 KYLIE Padilla takes after the guts and discipline of her famous father. NELSON MATAWARAN

Kylie Padilla lies on the floor with her knees bent. Then, by sheer core power and without any hands, she quickly jumps to her feet and slashes the space with a knee kick.

Likewise, she can effortlessly climb up a tall wire fence and jump down as smoothly as a cat.

A chip off the old block, the 21-year-old sometimes walks around the gym with the swagger of her father, Robin Padilla. Although her alabaster skin and sculpted face are those of her mother, Liezl Sicangco, the younger Padilla says she inherited her firm jawline from her father.

“Hello, Papa,” says the younger Padilla as she pats her jaw.

She grew up with her mother in Gold Coast, Australia, and returned to the Philippines at age 14.

“My father didn’t want us to speak with an accent. It’s sosyal daw. He raised us like boys. We didn’t go shopping. Our bonding was PS3 (PlayStation 3), paintball and action movies,” she recalls.

Her father would also take her to the set of his action films.

“I would see how disciplined he was. When we stayed at Discovery Suites, he would climb up 24 floors. He would eat only a calculated amount of oatmeal and drink two glasses of water. That was it,” she says.

Enamored with martial arts, she was sent to Thailand by her father to study Muay Thai or Thai kickboxing for three months. She stayed in the boarding house which was across the gym and worked out all day.

Unlike other boxing forms, Muay Thai utilizes the shin bone, elbows and knees, which can be more lethal than the fists.

In the end, she learned the traditional wai khru, a ritualistic dance that showed reverence for the master teacher and also demonstrated the fighter’s technique and art.

Back in Manila, she joined an event where she beat an opponent who was older and bigger than she.

A fan of Chinese martial arts films, she also took up Wushu, gymnastics and arnis, all of which further developed her speedy reflexes and fearlessness.

“Arnis is like an extension of your body, but you’ll need more space to move with them. One strike, and you could either break someone’s bones or kill,” she says.

Although she hasn’t been in a real-life situation where her fighting techniques were put to test, Padilla got to show her skills in “Joaquin Bordado,” an action fantasy movie starring her father, produced by GMA Films in 2008. Then 15, she played Erenea, a tattooed warrior character on her father’s back. She would come alive and guide him when his character would be in danger.

She could have been the Philippine version of Malaysian action star Michelle Yeoh, but action films haven’t been as popular and profitable as adult dramas.

“The trend favors sexy movies. I’m sorry, I can’t do that,” she maintains.

She has appeared in musical variety shows as well as teleserye in the horror, comedy, drama and fantasy genres on GMA 7.

Padilla says falling in love opened up her feminine side. She started learning makeup skills online and even took formal lessons.

“I’m an artist who enjoys drawing and painting. Makeup is an expression for me, like Muay Thai,” she says.

On her YouTube channel, she has uploaded her makeup tutorials and martial arts videos.

Lately she has been promoting her first CD, “Seasons,” for GMA Records. Her original compositions, she says, were inspired by her roller-coaster romance.

Between projects, she spends time at the Ultimate Fitness gym.

“Look at her jumps and kicks, her strong balances and fast reaction time,” says Tagle. “She can do stunts herself. Kylie has the potential to be a legit action star, and not just because she is Robin’s daughter.”