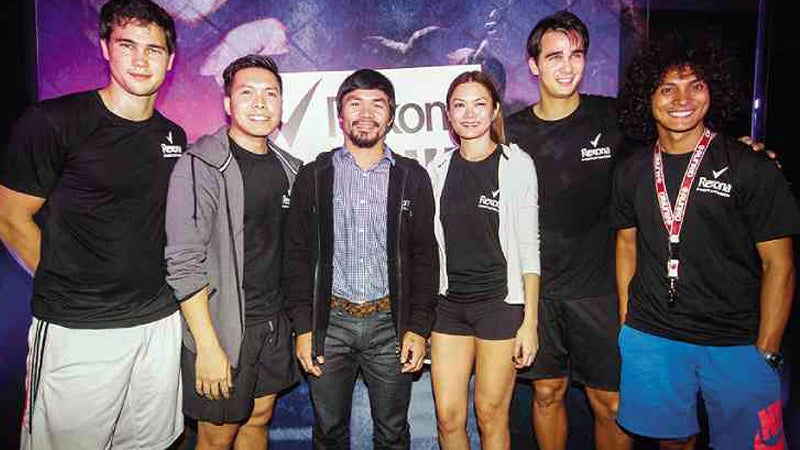 Pacquiao encourages Filipinos to ‘do more’ to get in shape

There’s no slowing down the Pambansang Kamao, Rep. Manny Pacquiao. Retirement from boxing is the farthest thing in 35-year-old Pacquiao’s mind.

“Naku, malulungkot lahat at wala nang mag-represent sa country natin! Gusto ko pa ipagpatuloy ang pagbo-boxing (Everyone will be sad because no one will represent the Philippines anymore. I still want to continue boxing),” Pacquiao said, smiling, putting an end to talks that he should quit his game while he’s on top.

In 2012, he lost two fights—first to Timothy Bradley in June, and then to Juan Manuel Marquez in December. Many assumed that would be the end of his stellar career. But, like a true fighter, he fought again and won against Brandon Rios in November 2013, and redeemed his dignity when he defeated Bradley in April this year.

On Nov. 22, Pacquiao will be up against American boxer Chris Algieri in Macau, China. Training for that match begins September.

Pacquiao, the latest brand ambassador of Rexona, formally kicked off the Rexona Training Camp that gives a chance to Filipinos, men and women alike, to act like a champion and train like Manny Pacquiao. Just sign up on Rexona’s Facebook page and have instant free access to 50 top boxing and MMA gyms in the country. Promo is ongoing until the end of the year.

“We want to cultivate a new generation of doers and active people. One of the biggest barriers to exercising is access. The Rexona Training Camp will give every Filipino access to gyms and classes,” said Mar Corazo, Rexona brand manager.

Pacquiao, with his train-harder-than-anyone-else mindset, is the embodiment of Rexona’s Do More philosophy. To push himself further each time, Pacquiao wakes up earlier, runs faster, throws punches harder and jumps farther than his previous record.

Today, Pacquiao is doing more. He is the first and only eight-division world champion. Aside from being the Sarangani congressman, he is also a PBA coach and player, unafraid to explore new challenges, saying he gets his strength from his faith in God.

Age is never a barrier. If anything, it motivates him even more, such that he actually recommends that older people get into boxing. That’s not surprising, coming from a man who’s very passionate about the sport. But if boxing is a tad too much to start learning when you’re pushing 40, badminton would be his next recommendation.

His wife Jinkee, he said, loves Zumba, while his children are basketball fans. “Walang mahilig sa boxing sa kanila. Walang boxing equipment na makikita sa bahay. Dini-discourage ko sila (No one among them likes boxing. There are no boxing equipment at home. I discourage them),” Pacquiao said.

(I want my mom to be happy. But for me, if I would be happy but not please God, then I would rather be not happy as long as I obey God’s will.)

His greatest fear is not losing in the ring, but losing his personal relationship with God, he said. His faith in God gives him the security and confidence he needs to see him through a match. With God by his side, “wala kang galit o takot (you have no anger or fear),” he said.

“Malakas akong kumain eh. Exercise lang ang paraan (I eat a lot, so exercise is the only way),” he said.