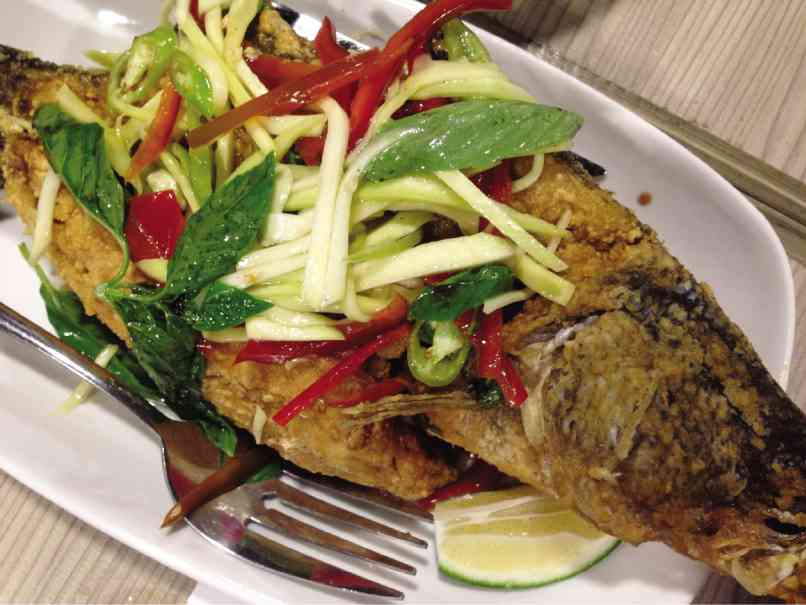 For years the patis bought off supermarket shelves was fairly homogenous: various brands of dark-brown liquor that was quite salty and packed a polite punch. My generation, at least, grew up thinking that this was the only taste possible for fish sauce.

When the baht fell in the late 1990s and it suddenly became ridiculously cheap to vacation in Thailand, people went in droves and discovered Thai fish sauce (nampla), which was more fragrant yet somehow less pungent and less salty. Thai cooks are obsessive about their fish sauce and do regular tasting. I have a mental image of them standing around and swirling it in cognac glasses and making notes in oenological notebooks.

A decade since, the market for our commercial patis has changed. The shelves have not just one or two brands, but are groaning with a wide range of brands and types. They’re mostly terrible, especially some of the cheaper “Thai-style” patis brews which are essentially tea-colored water with salt mixed into it.

I used to have a supplier who brought me homemade patis from Pangasinan. In Benguet you can get the kind of inky dark liquor whose smell punches you in the face when you open the bottle, not unlike the kind from Laos and Cambodia.

Metaphorically speaking, the Philippines is something of an island when it comes to the rest of Southeast Asian food. This is only partly due to the fact that we are geographically an archipelago. Our food culture is more tied to Southern China and Taiwan than it is to Indonesia—by which I don’t mean that the Chinese influenced our food, but that they developed with a strong interrelation. (Northern Chinese find the food of the southeast intolerably sweet, a habit they picked up after centuries of trading, and after falling under the spell of sweet spaghetti after Jollibee opened branches in Xiamen.)

This is quite a pity, because air travel should have connected us to peninsular Southeast Asia. But there are more flights to San Francisco than there are to Saigon.

And for those in search of food similar enough to ours to gorge ourselves on but still different to be interesting and dissimilar to what could be whipped up at home, the lure of nearby cuisines is difficult to dismiss.

Ninak, which, spelled backwards, is “kanin” or rice in Tagalog, is not so much a Southeast Asian restaurant as it is a Filipino dining place which uses tropes from other countries in the

region to make food that brims with flavor.

It borrows the best of neighboring cuisines and dishes out a Filipino version of it. It has Filipino food as well, and true to Pinoys’ love of anything imported, the nilaga is made from Angus beef, as is the crispy beef belly, which in itself is worth the price of admission.

I recommend that, as well as the beef sinigang (though not both, unless you feel like eating an entire cow in one go).

What I do not recommend is getting nasigoreng and bagoong rice to go with your meal (my mistake), because everything is bursting with flavor and needs steaming white rice to go with it—not another blast of new flavor.

The only dish with which I have a bone to pick is  the laksa, which was overly heavy and rich, and lacked the smear of stinky bagoong that makes the Singaporean Katong version so good.

The chef is a dab hand at blending spices and serving up bold flavors, though everything is at full volume all the time.

I’ve heard that the menu has changed a few times, so this might be a good sign that he is experimenting and, perhaps, modulating. But then with enough ninak, spelled backwards, everything can be doused.

The only dessert I was able to try, a turon filled with halo-halo sweetmeats, felt like an accident rather than an invention. The inventiveness with pan-Asian fragrances and flavors does not extend to dessert, for which I feel cleaner, lighter tastes are in order, though there is something truly Filipino about following a huge, rice-laden meal with something filled with glutinous rice which can glue everything together.

I was hoping to be the first to discover this restaurant.  But the mother of all endorsers, Kris Aquino, has already put her imprimatur on this place, so I can only add my voice to hers. (The original branch is in Kapitolyo, Pasig.—Ed.)

Serious eaters should make space in their schedules and stomachs, because Ninak is delicious spelled backwards.