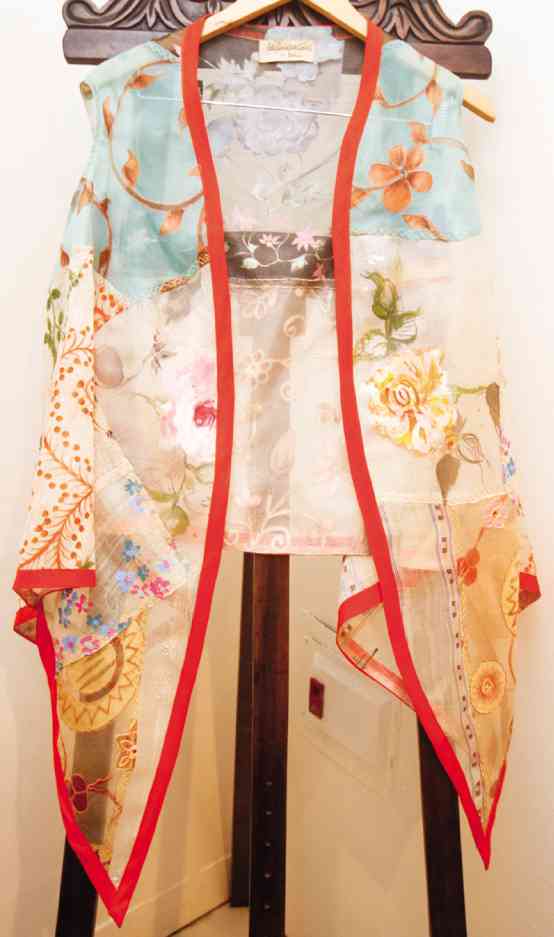 TESORO calls her collection “recycled fashion,” now a global trend. This one a bolero pieced together from retaso or fabric scraps

Patis Pamintuan Tesoro has regular clients from as far as Singapore and the United States. Strangely, the one designer known for championing Filipiniana wear said nobody goes to her during the annual President’s State of the Nation Address, the one occasion politicians and their spouses embrace and splurge on traditional formal wear.

“Look at the clothes. They’re all georgette,” she said with a grimace during the media preview last week of her exclusive line for Rustan’s.

“Filipiniana is changing. We have to change the look and the concept,” she said. Designers should “update themselves,” she added. “They’re kinda stuck in time thinking this is just what it should look like. Yes, there are certain structures, but you have to be more creative.”

Tesoro clearly isn’t a fan of the virtual all-terno memo during the Sona.

“It’s nuts!” she said. “Move on to more wearable, doable clothes. You can be formal even with something big like that,” she added, pointing to one of her designs on the rack, a voluminous top with embroidery.

Tesoro’s eponymous line has been at Rustan’s for a year, but it will be launched only in the Makati branch on Sept. 4 (it is also available at Rustan’s Shangri-La).

“I’m quite happy Nedy [Tantoco, Rustan’s’ president] decided to have me,” the designer said. “I mean, they’re taking a chance on me. This kind of look isn’t mainstream in the

Philippines, not yet anyway,” she added, as three models came in wearing looks that she described as “bohemian,” “gypsy” and “1960s Haight-Ashbury.”

The clothes were pieced together from her roomful of retaso, or fabric scraps, a mad mix of piña silk, abaca, cotton, sinamay and even balud, a handwoven material from Mindanao.

Perhaps she was using the word retaso loosely; they come from many years of collecting both from here and abroad. She never throws anything away, she said, because “every single centimeter was paid for.”

She called it “recycled fashion,” and noted that it’s now a global trend and given premium in sophisticated markets. “People want to recycle, and this is my take. It still takes a lot of work.” For instance, it takes up to four months just to piece together the fabrics.

Tesoro, 63, is known for her distinct take on traditional Filipino wear. She has a keen eye for color and an extraordinary flair for mixing seemingly clashing patterns.

She likes volume and textures, her pieces a true delight to behold, but perhaps also over-the-top in the eyes of some. A Filipino Betsey Johnson, if you will.

Tesoro works with women from three barangay in Laguna and a young girl with special needs in Manila, all of whom she trained to embroider, bead and piece together her patchwork of fabrics.

She laments that needlework and traditional artisanal skills are becoming lost. (She used to be a supplier for Valentino.)

Almost all her pieces are one-off, and all are handmade, which should explain the rather steep price tag. Scarves start at P5,000; a typical blouse hovers in the five figures. One striking beaded patchwork bolero retails at P17,500.

“I have a supply that’s good enough for a year. After that, maybe no more,” she said with a chuckle.

She’s hunting for new fabric sources, and she’s even growing her own cotton in a bid to revive Philippine cotton.

On her racks was a kaleidoscope of separates. Most were free sizes, roomy clothes that she felt would flatter both the skinny and the more robust of women. 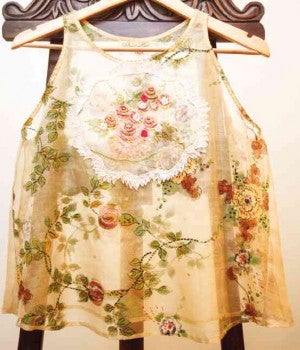 She also included lowly dusters that had been given special details—a calado embroidery here, some beadwork there. Tesoro started her business years ago making jazzed-up dusters for doñas who played mahjong.

Her collection at Rustan’s, said Tesoro, was designed to appeal even to younger women, the same ones who typically attempt to wear Filipino formal but with their own contemporary twist to it—say, a butterfly-sleeve terno top paired with shorts.

Tesoro frowns on this. “They don’t go together because of the structure. One is easy to wear and the other part is poised. Even your mind would reject it!”

She knows, however, that her customers will not buy into her prescribed look wholesale.

“I go for a lot of streetwear,” she said. “Wear my little top with pants or leggings. These are pieces that you can wear for a whole day out, and then go to a cocktail at night and you won’t be out of place.”