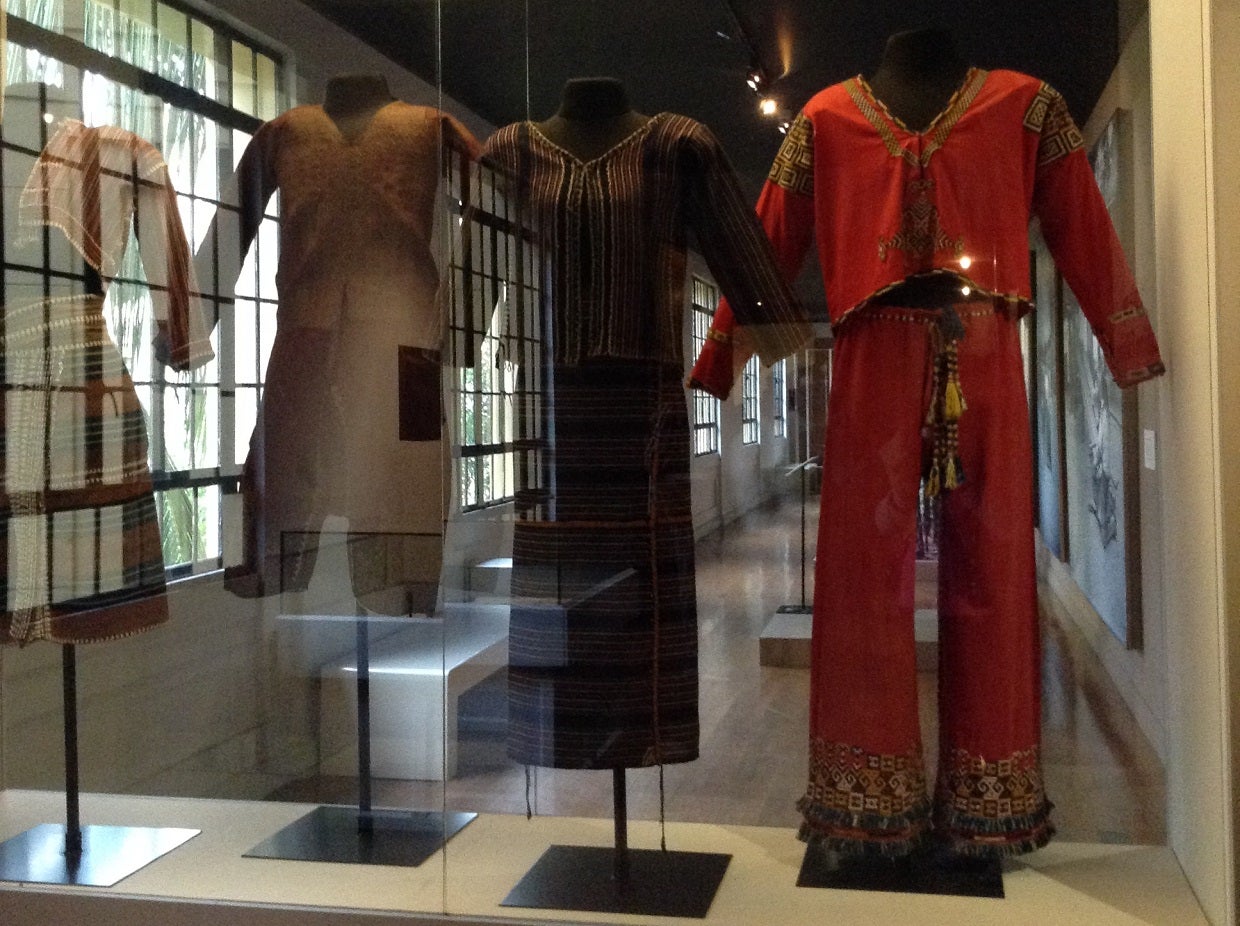 "Hibla" exhibit at the Museum of the Filipino People in Manila showcases the traditional garments and other woven fabric, including Senator Loren Legarda's collection -- a "Baro't Saya -- which she wears for formal occasions. From the Office of Sen. Loren Legarda

MANILA, Philippines – Will incumbent senators now be ready to take the lead to follow a decades-old law mandating the use of tropical fabrics as official uniforms of government officials and employees?

Senator Loren Legarda pointed out that under the Philippine Tropical Fabrics Law of 2004, which she authored, all government agencies should use tropical fabrics as official uniforms of government officials and employees and should also be required in government offices and functions.

Tropical fabrics are defined under the law as those containing natural fibers produced, spun, woven or knitted and finished in the Philippines.

Legarda said that while the law was being implemented by some agencies, “there is still a need to make sure everyone complies so we provide livelihood to rural micro-enterprises and to farmers too.”

“The Fiber Industry Development Authority of the Department of Agriculture is the implementing agency of my law. However, all government agencies should be compliant, including the Philippine Senate, including the senators…” she said in an interview with reporters on Thursday before she toured them around the permanent textile exhibit at the Museum of the Filipino People in Manila.

The exhibit was dubbed as the Hibla ng Lahing Filipino: The  Artistry  of the Philippine Textiles

Museum director Ana Labrador, who joined Legarda in discussing the  exhibit with the media, lamented  that  until now,  not all government officials and employees have been using fabric uniforms.

In the Senate, Legarda was notably the only senator who has been wearing woven or knitted clothes  even just for  everyday work or special occasions  like the  state of the nation address held every July.

In fact, unknown to many, she said she experimented on the uses of fabric cloth like a table cloth, which she sometimes used as a shoal or a skirt.

“The bottom line here is art appreciation, culture…We want us to appreciate our culture,  our rootedness, our heritage, our wealth,” she added.

Legarda said her passion for native products and fabric materials started when she was 18,  something that she  said she inherited from her mother and grandmother.

A former broadcast journalist, the senator recalled how she enjoyed  collecting native bangles and necklaces whenever she did stories  in far-flung areas.

And now that she is a senator, she is now bringing her love for native products particularly fabric cloth, not only to the halls of the Senate but also for the whole world to see through various exhibits.

“Having a museum, a gallery is so essential because it’s a hub. It’s a permanent point where people can watch, can sit, can read, can learn,” she said.

“Media can help generate interest or awareness so that people would know its value. They will be interested and curious. Then there can be commerce and trade.”

Her passion for Philippine fabrics has also led her to a great  discovery – no less than  the national hero, Dr.  Jose Rizal, has his own collection of textiles in Berlin.

While attending an economic forum in Berlin last year, the senator said she heard from the Philippine ambassador that there was  a Rizal collection of textiles in the archives of the  Berlin ethnological  museum.

Wasting no time, Legarda immediately went to the museum to see Rizal’s collection.

“Amazing, he has a salakot made out of carabao. He has a pinya ba, he has a barong and saya…amazing… and that was 1887,” she exclaimed.

She learned from the curator that Rizal gave the collection to his friend, who  later became the founder of the Berlin museum.

“I don’t know if it’s given one time nobody knows of course or given tingi-tingi…And I’d like to know—I wish they knew—who wore the dress, who wore the small barong… and where did Dr. Rizal purchase it, get it?” Legarda asked.

“He’s a brilliant  guy who has always been very global. As early as 1880s he already saw the value of textiles in our culture.”

Labrador said the Rizal collection would soon be a special feature of the National Museum as they plan to bring it to the county early next year.

But bringing home Rizal collection, she said,  would not be easy and cheap.

“Oh it would be very expensive,” said Labrador, who has been tasked to go to Berlin and bring home the Rizal collection.  She did not say though how much the  government would spend for it.