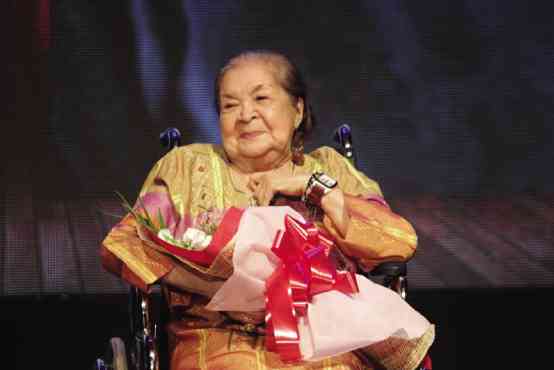 When she retired from full-time teaching in 1984, eminent actress Naty Crame Rogers, already famous for her roles as Leonor Rivera, Rizal’s first love, and as Paula in the film version of Nick Joaquin’s “A Portrait of the Artist as Filipino,” established her Aming Tahanan/Sala Theater (also known as the Philippine Drama Group).

In between acting assignments in Rolando Tinio’s Teatro Pilipino (for this specialist in English decided she also wanted to be fluent in interpreting the world’s classics in Tagalog), she nurtured the group which was, then and now, low-profile.

The Sala Theater was envisioned as a neighborhood project, community, volunteer, alternative theater. The venue was the Rogers home on Stella Maris St. in Kapitolyo, Pasig City, which was like a living museum. There were antiques, religious images, family photos, jars, paintings and mementos collected from travels abroad.

It was a family affair, with nieces, Naty’s husband (Capt. Joe M. Rogers) and their adopted son Ralph helping along when they were still alive. Friends and neighbors would be invited, and if there were funds, merienda (snacks) would be served. And afterwards the guests would mingle with the actors.

The Inquirer’s editor in chief, Letty Jimenez Magsanoc, was a neighbor and would occasionally join the fun. Friends and acquaintances, all non-actors, would be prevailed upon to act in the productions, to such an extent that Inquirer Arts and Books section editor Lito Zulueta in 1988 called Crame-Rogers a “seductress.”

The house was ideal for intimate theater and those in the front row could almost reach out to the actors. A bedroom with bathroom served as a dressing room for the girls, while there were outlets where the actors could pass through without being seen by the guests.

The Sala Theater was as poor as can be, although sometimes sponsors could be found. The signature productions were Severino Montano’s “The Love of Leonor Rivera” and Joaquin’s evergreen “Portrait…” A grant from the Cultural Center of the Philippines enabled the struggling group to mount the Montano play there, with Tommy Abuel, no less, as Rizal.

A sponsor, Robert Lane, was also found so the play could be presented at Ilustrado Restaurant in Intramuros, with cocktails and all, and starring young tenor Arman Ferrer.

And then disaster struck.

Recently, as friends were preparing for her 90th birthday, Crame-Rogers had a serious fall at her residence and had to be rushed to the hospital. There she stayed for a long time, the hospital bills mounted, and she was forced to sell her living museum of a house.

The Sala Theater lay moribund for sometime, but now it’s back. Well, not with a vengeance—but at least it’s still here and with a season at that, however modest and tentative.

Things started to move with a staging of the farce “Panhik Ligaw,” based on Anton Chekhov’s “The Marriage Proposal,” at the company’s new venue, the 77-A West Capitol residence. It is all about a quarrel over land, an asthmatic suitor, a hostile maiden and her aggressive father.

As an appetizer, Catherine Roxas Rodrigo performed the famous soliloquy of Katharina in Shakespeare’s “The Taming of the Shrew.”

The season continues with the staging of Thronton Wilder’s “Our Town” on Oct. 3 (to be restaged in February 2015); a reading of “Portrait…” on Oct. 28; and a tribute to National Artists Bert and Daisy Avellana on Jan. 26, birth anniversary of Daisy. The Avellanas were close friends of Crame-Rogers.

This is not the first time that the Sala Theater has performed “Panhik Ligaw.” It has staged this before for sickly and elderly Benedictine nuns, St. Scholastica’s College being the high school alma mater of Crame-Rogers.

As she put it: “We want to bring simple joy to people who need to be happy, to make well those who are not well…”