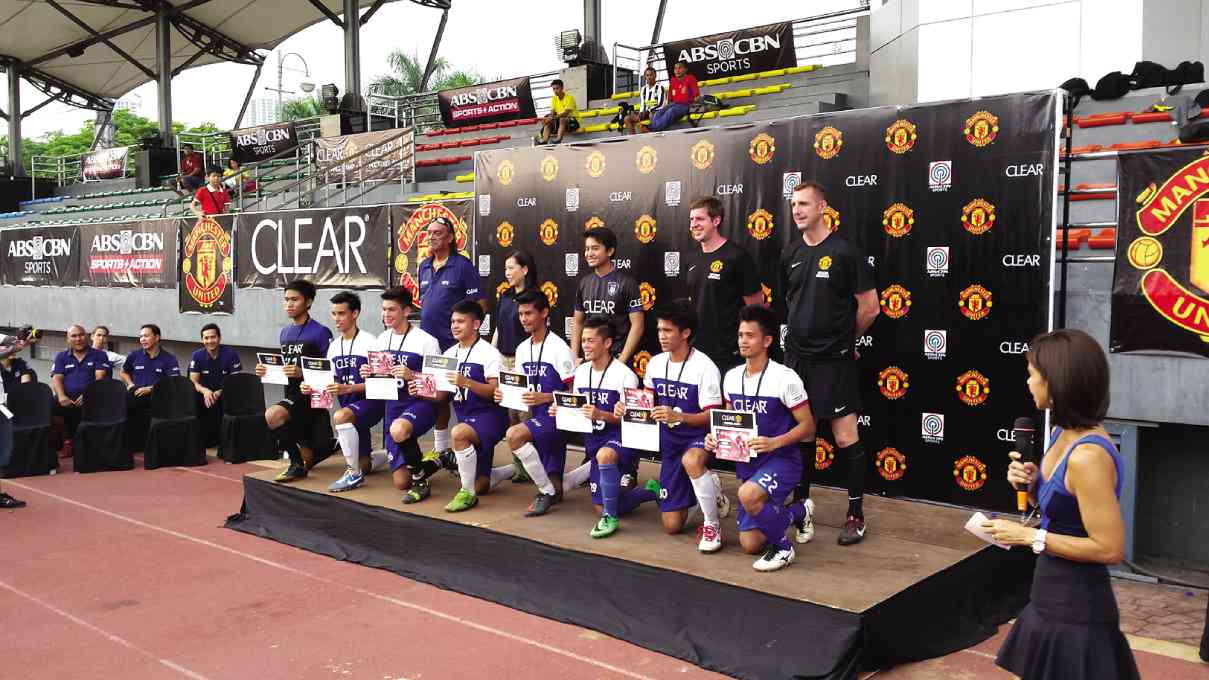 In the Philippines, it is undeniable that football has become more popular over the past decade. But we’re a long way from the burning passion that most of the world harbors for the beautiful game and the World Cup.

And despite steadily climbing up the international rankings, the Azkals, as the Philippine national team is affectionately called, has a lot more to achieve before they can join the grand stage of the FIFA World Cup.

Haircare brand Clear has taken great strides in furthering the development of Philippine football at the grassroots level, with the purpose of transforming the Philippines into a World Cup nation.

Thirty-two of the best and brightest young amateur footballers from around the country had the opportunity of a lifetime when they participated in the first-ever Clear Manchester United Football Camp.

These young players were chosen through extensive and rigorous tryouts held by Clear and the United Football League (UFL) in Cebu, Davao, Iloilo and Metro Manila, selecting eight of the top players from each region to make up the 32-man roster that would participate in the camp.

The three-day camp was held at the University of Makati on April 23-25, training the young amateurs with the same methods and principles that have produced players such as David Beckham, Ryan Giggs, Paul Scholes, and, though not a product of the Manchester United Academy, Cristiano Ronaldo himself, who was recognized as the FIFA World Player of the Year in 2008, during his time with Manchester United.

Conducting the Clear Manchester United Football camp were UEFA qualified coaches Jamie Fitzpatrick and Kevin O’Connell, who brought with them training methods and drills that are very much foreign to the country. These methods were designed to improve aspects of the players’ game not taught by local coaches.

“I learned a lot of new techniques, something we don’t really do with the local coaches.” said La Salle Green Hills midfielder Matthew Custodio.

In addition to honing and developing the individual skills and talents of the players, the coaches also aimed to improve the players’ tactical intelligence, creativity, and decision-making during game situations, as well as to develop their character and attitude on and off the field into that befitting of a Manchester United Player.

“After the training drills, we also had schooling off the field, so that they can show us how Manchester United plays, along with the movement of the players and their characteristics,” explained attacking midfielder and Clear Manchester United Football Camp Most Valuable Player (MVP) Daniel Gadia in Tagalog. “They taught us the five aspects that make a Manchester United player: tactical, technical, mental, physical and social. You have to cover all of five of those aspects if you want to make it at Manchester United.”

“It helped me to be more aware of what I’m doing inside the field,” said midfielder and Clear Manchester United Football Camp “Best Skills” winner Michael Mabanag.

“My decision-making skills are pretty precise, but then sometimes I don’t relax, sometimes I have to take one or two more seconds before I give that pass or take that shot,” he added.

Manchester United F.C. is a club that has built a solid core of homegrown talent, with players such as Giggs, Scholes, and Beckham breaking through the ranks of the academy and into the first team.

Affectionately termed “The United Way,” it is a philosophy that the club has followed closely since the days of Sir Matt Busby, and continued by the legendary Sir Alex Ferguson.

It is this same philosophy that has convinced Clear to partner with Manchester United to further the development of Philippine football at the grassroots level, with the goal of one day seeing the Philippines competing in the FIFA World Cup.

“Clear has always dreamed of the Philippines becoming a world-class football team. Football is the number one sport in the world. The Philippines is still a basketball country, but it doesn’t mean that we can’t become world-class in football,” said Clear brand manager Andrew Copuyoc.

He added: “In order to make this dream a reality, we needed to team up with a great football institution; that’s why Clear partnered with the Manchester United, the world’s number one football club.”

The Clear Dream Match pitted brother against brother, as James triumphed over Phil Younghusband in a match that also featured Manchester United legends Andy Cole and Paul Scholes, starring for each team, respectively.

Team James secured a win, 1-0, when defender Joaco Cañas scored the solitary goal with a header from a Chieffy Caligdong corner kick.