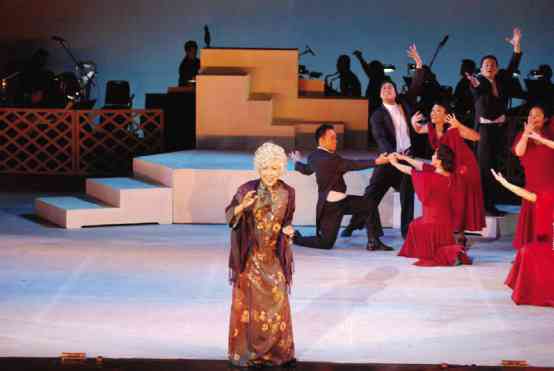 CCP’s ‘Musikal!’ brings musicals and performing artists together in ‘show of force’

Excerpts from the best-loved Philippine modern and contemporary musicals will be featured in the ambitious production, “Musikal!”, the gala concert to mark the 45th anniversary celebration of the Cultural Center of the Philippines (CCP), on Sept. 5-6.

It will have a cast of 200 and will involve close collaboration with the musicals’ original directors and the original theater companies such as Tanghalang Pilipino, Ballet Philippines, Philippine Educational Theater Association, Trumpets, Spotlight Artists Centre, Bit by Bit Company, 4th Wall Theater Company, Green Wings, and Ateneo Blue Rep.

Chris Millado, the show’s director, said it would try to prove that “we have what it takes to mount quality productions minus the big budget and global marketing.”

He added: “This production will show our best loved songs and our own showstoppers and our stable of grade ‘A’ singing actors and composers. This is also aimed at claiming that space for original works and that we can, not only shine, but actually compete globally.”

“The cast is huge and numbers more than 200,” said Millado. “We are batting for a running time of about two hours and a half. Happily, the burden of directing musicals falls on so many people and not just on the director. You have to closely collaborate with choreographers and dancers and ensembles of singers. For another, the music and the dancing need to tell a story together with the acting.”

Millado said Filipino musicals have evolved through the years and gained more audiences. Some of them have adapted their content from Asian mythology such as “Rama, Hari” (from the Hindu epic “Ramayana”). From the original zarzuela, Philippine musical theater has evolved to pop and contemporary music. They’ve tackled more contemporary subjects, such as “Maxie the Musical,” “Caredivas” and “Rak of Aegis.”

Millado admitted he enjoys directing musicals.” I like the spectacle of directing singers and dancers doing showstoppers. As they say, if you can’t sing it, dance it. So you have to make the entire ensemble sing and dance before you can focus on their acting.”

He said directing a cast of hundreds isn’t really a big deal. “You just basically put them on stage,” he added, “and let them do what they do best in productions they have done in the past. Like it or not, I am functioning here as, quote unquote, ‘a glorified stage manager.’ The real challenge is how to put the different production elements together in a most seamless way possible.”

Millado, who is also CCP artistic director, said the production is “big” without apologies.

“Our purpose is for the Filipino artists to claim a special space for excellence,” he explained. “We are mounting this to prove that original Filipino musicals can stand comparison with the best international productions.

“Of course local productions are up against big brands and flashy marketing given such high-budgeted productions as “Miss Saigon,” “Phantom of the Opera” and “Mamma Mia!” In that sense, we are easily overpowered. But it doesn’t mean we are inferior in terms of quality. A lot of Filipino musicals are in fact excellent. So this production is in some ways a show of force.”

Millado is bullish on the future of  Filipino musical theater. “It is very challenging but we have to answer the basic needs of the theater and the people who make those productions possible… We have to find a way to make our seasoned performers earn a decent living. We have to help other good theater groups find decent venues. We have the manpower but not the big resources shared by big productions in Broadway and West End.”

Millado noted “Rak of Aegis” has logged in more than 100 performances “and they are lucky because they have their own venue.”

“What we don’t realize,” he pointed out, “is that foreign musicals achieve a certain kind of quality because they run for years. It’s time we reassess what we have and what we can do to claim another space for excellence on the global stage.”