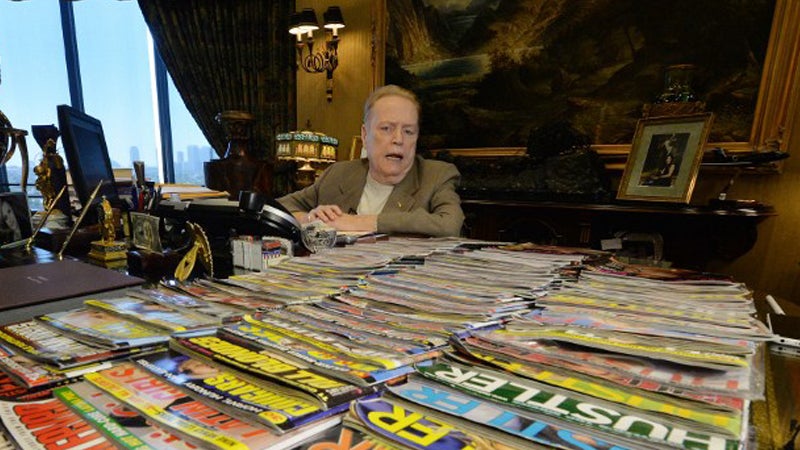 “I’m the largest content provider in the world for adult material, (operating in) 60-70 countries and still growing,” he told Agence France-Presse (AFP) in his vast rococo-decorated and deep-pile green carpeted Beverly Hills office.

Dressed in a beige suit with gold and diamond rings, Flynt surveys photos ranged on his enormous, Napoleon-style desk including his wife and himself with Bill Clinton, as well as caricatures and a collection of his magazines.

“They did a poll recently — 80 percent of the women who enjoy adult film care about the dialogue the quality of production. Men they don’t care, they take it raw,” he smiled.

The 71-year-old has been in his gold-plated wheelchair since an attack which left him paralyzed below the waist in 1978.

While celebrating his magazine’s four decades in print, he admits it is struggling, with circulation down from a peak of around three million during its heyday to “a couple of hundred thousand today”, according to a Hustler spokesman.

“Publishing is not good .. for anybody in America because Internet is replacing print. We’ll continue the magazine as long as it is profitable. Then we’ll go online,” Flynt said.

‘Having our best year’

“We’re having our best year this year,” he said. The sale of Hustler’s Beverly Hills headquarters building for $89 million has doubtless helped the bottom line.

But his proudest moments have been his legal victories in the fight for freedom of expression, he said.

Over the years he has faced repeated lawsuits for pornography, for desecration of the US flag, refusing to reveal sources, defamation and, most famously, for “emotional distress.”

In 1983 Flynt was sued by the Reverend Jerry Falwell over a parody of the pastor which appeared in Hustler. After initially being found in the wrong, Flynt took the case all the way to the Supreme Court in 1988.

The case was portrayed in the 1996 movie “The People v Larry Flynt” by director Milos Forman and starring Woody Harrelson, which was nominated for two Oscars.

“We won a lot of important legal battles for The First Amendment … like the case we had before the Supreme Court where parody was made protected speech,” he said.

“They couldn’t run us out of business, even though they tried very hard,” he said, adding that today’s comedy news programs like The Daily Show and The Colbert Report could not exist without the parody ruling.

Flynt is pro gay rights and against the death penalty — he even campaigned, in vain, against the execution of the serial killer who put him in a wheelchair.

While he is politically committed, it is “probably not for the same reason as most people.

“I couldn’t care less who’s in office. It’s who they appoint to the Supreme Court, because those people are appointed for life. And they really make the decisions that affect your everyday life.”

He notably cites the 2010 Citizens United ruling, which did away with restrictions on campaign contributions for institutions, and also “decided that corporations are people.”

The ruling was “the most ludicrous decision I’ve ever heard of,” said Flynt.